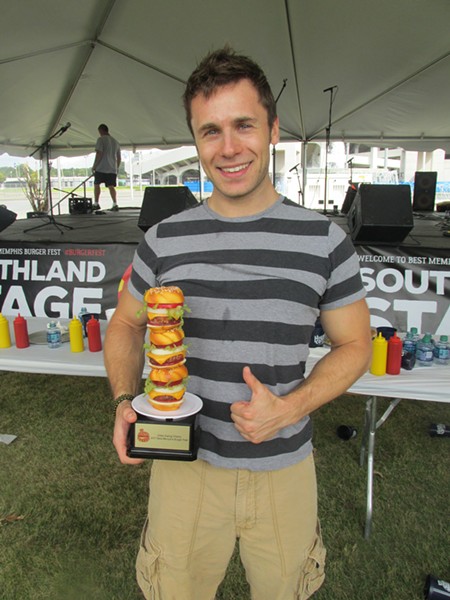 The Brranimal did it again.


Brett Healey, appropriately nicknamed “The Brranimal” for his power-eating expertise, won the slider eating contest at the Best Memphis Burger Fest, held Oct. 7 in Tiger Lane. He ate 12 sliders in five minutes.
On Aug. 20, Healey won the meatball eating contest at the Monroe Ave. Festival in front of Bardog Tavern. He was the first contestant to finish 40 meatballs. He finished in 13 minutes and 14 seconds, which beat the previous record of about 15 minutes.

“This is a new one for me,” Healey said. “I’ve done burgers, but never cute little burgers.”


Contestants were allowed to dunk their sliders into water during the contest. “I didn’t know if dunking was going to be allowed. I’ve actually never dunked in a contest before. But everyone else had the water cups. I mean, that’s the level you’re playing at, so I just went in there and ate as fast as I could.”


Did he eat breakfast before the event? “There was no breakfast this morning. That was my breakfast. I was very hungry.” 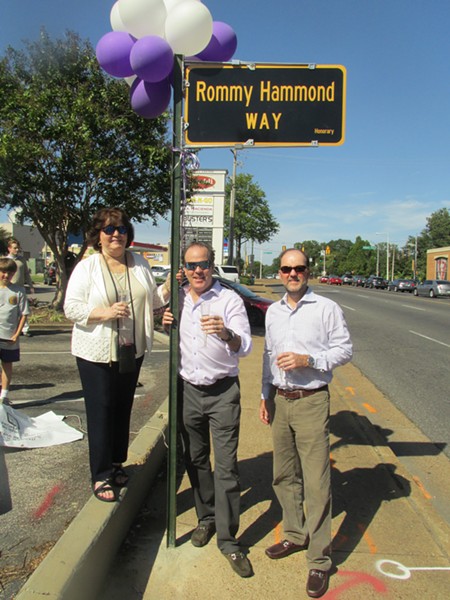 
When he heard a section of Highland was going to be named after his dad, the late Rommy Hammond of Buster’s Liquors & Wines, Josh Hammond wasn’t sure “Rommy Hammond Street” sounded right.


Bill Boywid, long-time general manager at Buster’s, said, “It’s got to be ‘Rommy Hammond Way.’ We’ve got to do that.’”


And that’s what the section in front of Buster’s on Highland between Poplar and Central now is designated.

“For those who knew Dad, he truly did things his way,” Josh said. “He worked hard. He valued that in others. He said he was going to set out to build the largest liquor store in Tennessee. He said it at a young age and he did it. When he got behind something, he was full force with energy.”


Josh’s brother in law, City Councilman Kemp Conrad, suggested they name a section of the street after Rommy. Josh felt it was “very deserving.” Most people just know Rommy from “growing Buster’s into this incredible wine and spirits emporium.”


But, he said, many people don’t know Rommy “actually grew up in this area, a couple of blocks nearby on Ellsworth. He went to St. Anne’s Highland Elementary just down the street. The man probably spent 72 of his 76 years in this neighborhood.”


A special champagne celebration to commemorate the day and unveil the street was held Oct. 3. About 100 people, including family and friends of Rommy, attended. Included in the family group were Rommy’s wife, Gay, and sons Josh and Morgan.


The day was special in another way. “Today is Dad’s 77th birthday,” Josh told the crowd.


And, he said, “Cheers to Rommy!” Guests raised their glasses.


That’s not the end of the story.


“The next day when we came in I checked the customer count for that day,” Josh said. “It turned out to be 777 customers on his 77th birthday. If that’s not a sign, I’m not sure what is.”

Instead of stalactites hanging from the ceiling, suits and other stylish clothing were hung on racks.


“The first phase of it opened two years ago,” said Jeremy Thacker-Rhodes, who owns the store with Matthew Thacker-Rhodes and Dara Vongphrachanh. “Trying to come up with a concept like redefining the modern man was the goal when opening up the barbershop side. Baron’s is a new kind of barbershop. It’s designed with a modern man in mind. It brings you all the amenities and services of a high end salon, but delivered in a laid back, masculine environment.”


The store was ‘just a barbershop” when it opened, Jeremy said. “It basically offered haircuts, shaves and foot treatment and facials all under one roof.”


They then thought, “How can we take it to the next level? Throw in a full line of men’s grooming products, full men’s retail and jewelry into the mix.”


“Our goal adding the retail was becoming a one stop shop,” Jeremy said. “A man can come in. He has a dinner date on a Friday night. He can come into Baron’s, change his whole style with his appearance - hair cut, all his grooming, his wardrobe. He can come in in gym shorts and leave full clothed and groomed for a night on the town.”


They wanted a name that personified “a well groomed, masculine, well-put together man. What would be the name of a fine-tuned gentleman?”

A crowd of 160 two-legged people attended the 11th annual SPAYtacular to help their four-legged friends. The event, held Oct. 9 at ANF Architects, featured food from area restaurants and an open wine and beer bar. Hank and Nora provided the music.

Board chairman/president Cathy Simmons chaired the event, which drew 160 people. “The purpose of the party is to benefit Spay Memphis, a non-profit dedicated to reducing pet overpopulation and high euthanasia rates by offering affordable spay and neuter surgery to the public.”


SPAYtacular “is our major fundraiser,” Simmons said. “However, we do accept private donations. We also get grants from certain organizations. We have a partnership with Memphis Animal Services. They pay us to spay and neuter dogs they are going to foster out.”


“All kinds of people can come to the clinic and not pay or get a reduced fee. Our fees in general - if you do pay full price - are generally lower than if you’re going to a private veterinarian. Some people cannot afford that.” 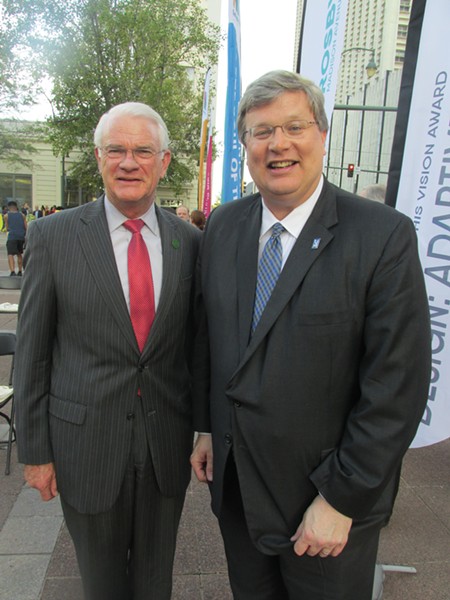 Lots of cake and other treats, including the Memphis Grizzline, were on hand at Civic Center Plaza Oct. 4 for the Downtown Memphis Commission’s 40th anniversary celebration.


A wine tasting at Erling Jensen: The Restaurant is an enticing idea. Athens Distributing held a tasting Oct. 4.

“It was for the trade only,” said Ginger Wilkerson, vice-president of the artisan selections division of Athens. “It wasn’t a public tasting. It was for our clients, restaurateurs and retailers.”


So, what did Jensen serve as an accompaniment to the wines? Among the culinary items were duck confit with braised red cabbage and a cheese plate with four different types of cheeses: blue Stilton, espresso rubbed barely buzzed, Dutch Muenster cheddar and Parmigiano-Reggiano, said chef de cuisine Will Hickman.