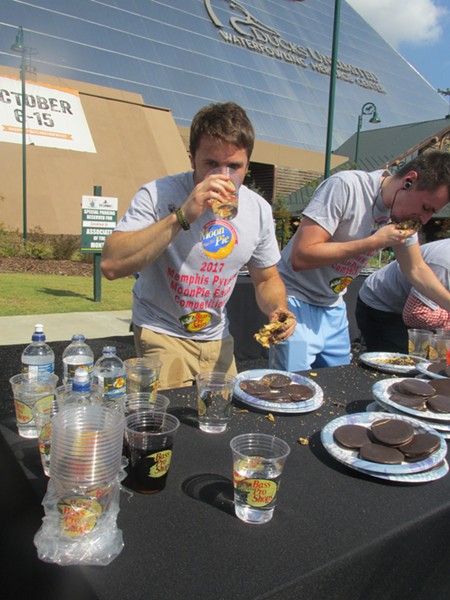 With recent meatball and slider eating contests under his championship belt, Brett “The Brranimal” Healey tried his hand - and choppers - in The Bass Pro Shops World MoonPie Eating Championship, held Oct. 14 at Bass Pro Shops at the Pyramid.


Healey went for the gold - as in golden graham crackers - as well as the marshmallow and chocolate.

He didn’t win; he came in seventh place out of 11 contestants, eating 24.5 MoonPies in eight minutes.


Healey, who ate his first MoonPie ever a week before the contest, said, “This was tough because you’ve just got eight minutes to go with as much as you can. This is the longest contest I’ve been in. The first time I’ve done it with sweets. It was pretty much just the people around me. Just keep pace with them. Go as fast as you can. And try to stay cool. It was a little hot out today.”


As in 88 degrees. As emcee Mike Sullivan said, “MoonPies with a chocolate covered shell, a marshmallow filling, I don’t know how well it’s going to go with the heat, so it’s going to make it that much tougher for the competitors out there. So, they have to have an iron will and a stomach capacity to match.”


Asked after the contest if he could eat one more MoonPie, Stonie said, “I could. But I don’t have to. So, I’m good for now.”


Healey won the meatball eating contest Aug. 20 at the Monroe Ave. Festival in front of Bardog Tavern. He won the slider eating contest Oct. 7 at the Best Memphis Burger Fest in Tiger Lane.


As for MoonPie eating competitions, The Brranimal’s dad, Jim Healey from Jackson, New Jersey said,  “I don’t think I’ve eaten 85 in my lifetime.”


“Not that I know of,” said Nick Black, who held what he calls “a mix between a concert and a cabaret show” Oct. 11 at the theater.


He was backed by 11 musicians throughout the evening. “All the music I played save for a few songs were from my new album, ‘Summer and Spring,’” he said.


His originals, he said, are “a mix between Justin Timberlake and Michael Buble. It’s soul music, but I can’t say it’s neo soul. That’s a genre from the late ‘90s, early 2000s. If I would put a genre, I would probably say ‘retro soul’ or something like that.”


So, how did he get an album release show at Theatre Memphis? “I’ve been going to Theatre Memphis for shows for a long time. My wife works there. It was just kind of a confluence of all the right factors falling in place.”


His show was held on a Wednesday night. “They had a show running. We had to find the correct spot in the middle of the week.”


And, he said, “I had a lot of help from the staff. They were excited to put on the show.”

MoonPies and music
By Michael Donahue
Click to View 23 slides