Christmas tree, Crafts and Drafts, U of M, VESTA

Of course, Santa was standing by for the lighting ceremony of the City of Memphis Christmas tree, which was held Nov. 24th at Memphis Botanic Garden.


This is the first time the City of Memphis tree is housed at the garden.


The IKEA Outdoor Lounge also debuted. Visitors can drink hot cocoa or a drink while gazing at the Christmas tree.

St. Jude patient Raniya Raheem, 7, did the honors of pulling the lever to turn on the tree lights, which changed colors. Music was synchronized with the lights.


“We were pleased to squeeze about 700 guests into our Conifer Garden to see the City of Memphis Christmas Tree lit for the very first time,” Allen said. “This 60-foot-tall contorted white pine is situated along our Cherry Road fence line. Even on nights when Holiday Wonders at the Garden is not operating, the city tree is visible to drivers passing by.”


Craft beers were available for shoppers as they visited more than 60 craft booths.


DJ Jordan Rogers provided music to shop - and sip - to.

“This is Memphis” also could be titled “This is University of Memphis.” Students from the school’s Rudi E. Scheidt School of Music were featured in concert Nov. 5 at the historic Clayborn Temple.


“We produce festivals every semester - ‘This is Memphis’ in Fall and ‘Hear 901’ in the spring,” said U of M music professor Ben Yonas. “The purpose is to give students in the Rudi E. Scheidt School of Music the opportunity not only in the performing, but in producing, promoting and marketing. It’s all about giving them real world experience. It’s also an opportunity to showcase talent.


“This was a really special festival for us this year ‘cause we tried something new. We wanted to feature acoustic renditions of songs - all original songs written by Rudi E. Scheidt School of Music students. And also pair them with arrangers and composers that would create the string arrangements. So, each song featured a different collaboration with student composers, singer songwriters and arrangers. And the arrangers were up there conducting the string ensemble.”


Yonas gave a shout out to violinist Hannah Hart. “She put the whole thing together from a logistics standpoint. This wasn’t her idea, but she took it on. It was part of her senior project.”


He was pleased with the show. “I think this will be a new tradition. We’ll do this kind of thing more often.”


Erwin, who performed two songs, said, “Collaborating with the strings for ‘This is Memphis’ was one of the coolest things I’ve done in my entire music career. I could have never written those arrangements.”


As for Clayborn Temple, Erwin said, “It was the perfect environment for the music.” 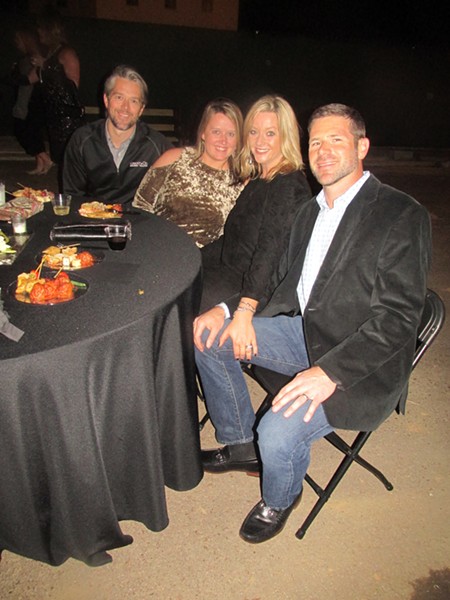 DJ Mark Anderson put together the recordings for the VESTA Home Show industry preview party, which was held Nov. 17.


So, some guests might not be familiar with “Ramona” and other tunes associated with the 1920s. The twenties was the theme of this year’s party, so guests dressed in tuxes or their flapper best.


About 800 attended, said Don Glays, West Tennessee Home Builders executive director. “We had a committee of several people that put the party on. Through their brainstorming they came up with something a little different.”

Slideshow Crafts and Drafts and more!

Crafts and Drafts and more!
By Michael Donahue
Click to View 100 slides