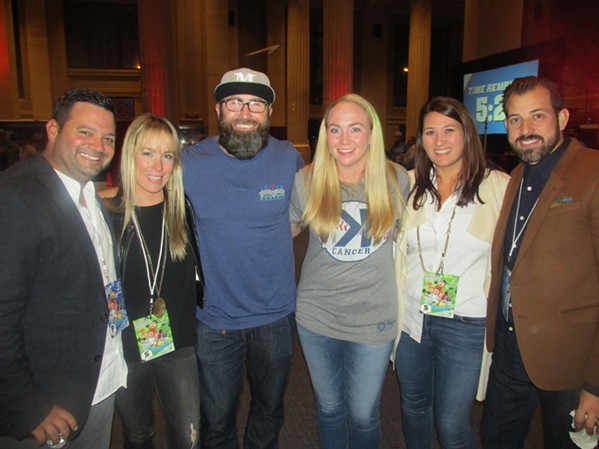 
This party is where you compete in cornhole - a game in which people throw bean bags into a hole in a raised platform.

Forty teams participated in this year’s event, which was held Nov. 18 at The Columns.


They used to do more of a traditional party, but two years ago they decided “to kind of mix up the event a little,” Caitlin said.


Cornhole is “more of a way for people to be truly interactive with the event,” she said. “It allows people to be more a part of things.”


Asked why this event is important to him, Jason said, “When Caitlin’s grandfather was diagnosed with stage one cancer before our wedding in 2010, we said, ‘How can we help those going through the same thing?’”


They were impressed with West Clinic, where Caitlin’s grandfather, the late Lynn Doyle, was being treated. They wanted to do an event “here in memphis to raise money and raise awareness for those going through the same kind of fight.”


“This is our sixth year doing an event here in Memphis,” Jason said. “Between our event in Memphis and events we’ve had in St. Louis, Chicago and our T-shirt sales, we’ve raised over $1 million. It’s going back to charity funding research. Helping to find a cure and helping those who are in this fight.” Chris McCoy and his wife, Laura Jean Hocking, hosted the 13th edition of the Indie Memphis Filmmakers Party. Their front and back yards and inside their home was packed at the party, which capped off the recent Indie Memphis Film Festival.


“It’s a great party,” McCoy said. “It’s always been a great party because we get interesting people from all over the world. We had people from Saudi Arabia this year. Jason Baldwin (from the West Memphis Three), drank his first beer as a free man at that party in 2011.”


Asked the purpose of the party, McCoy said, “When you’re a filmmaker and you go to film festivals, a lot of the time you’re herded around like prize cattle. The purpose of the Filmmakers Party is to allow filmmakers who come to Memphis to have a place to socialize and relax and just talk to each other.


“I’ve always loved that party because I can walk from the front of my house to the back of my house and every conversation I hear is interesting.”


Also making the party more exciting are the awards - Best Hometowner Feature, Audience Award and Poster Contest - Hocking won at this year's festival for the film, “Good Grief,” which she co-directed with Melissa Sweazy.

Forty dance students, most of them from Studio B Dance Inc. danced in the 25th anniversary production of Moscow Ballet’s Great Russian Nutcracker, which was held Nov. 24 at the Cannon Center.


“We have over 250 people in our studio,” said Studio B owner/director/Debra Bradshaw Powell.. “Not everybody does it.”


Someone with the Moscow Ballet visits Memphis for a week to “teach them everything,” Powell said. “The kids pay a nominal fee and that’s for the woman to come in and audition them and rehearse them for a week. And to rent the costume.”


The students get to the Cannon Center at 9 a.m. and get fitted for their costume and take part in photo shoots. The Moscow Ballet dancers arrive around 1 and run through a rehearsal with the local dancers. “Work out kinks. Run through everything on stage."


When they’re not on stage, the students watch the backstage action as well as the show. “They’re excited to have their turn on stage. They can’t wait to get out there. Not one of them said, ‘I’m nervous.’”


“It’s a post apocalyptical thriller about a guy who wakes from a coma for three years and realizes this ancient virus has infected two thirds of the world,” he said.


Prather, who describes the novel as “party detective novel, part thriller,” is a graduate of the University of Memphis. He now lives in Los Angeles, but he’s planning a Memphis trip around the holidays to visit his mom, Nadene Prather, and some of his other sibling.


You might have seen Prather on TV or on the movie screen. He’s been in a couple of mini series, including “Project Phoenix,” and a short indie film, “The Glass.”


He’s also been photographed in People, GQ and Men’s Health. “I do fitness modeling pretty regularly,” he said. “I’ve kind of gotten lucky with the model stuff.”


And, he said, he and his wife are expecting twins.