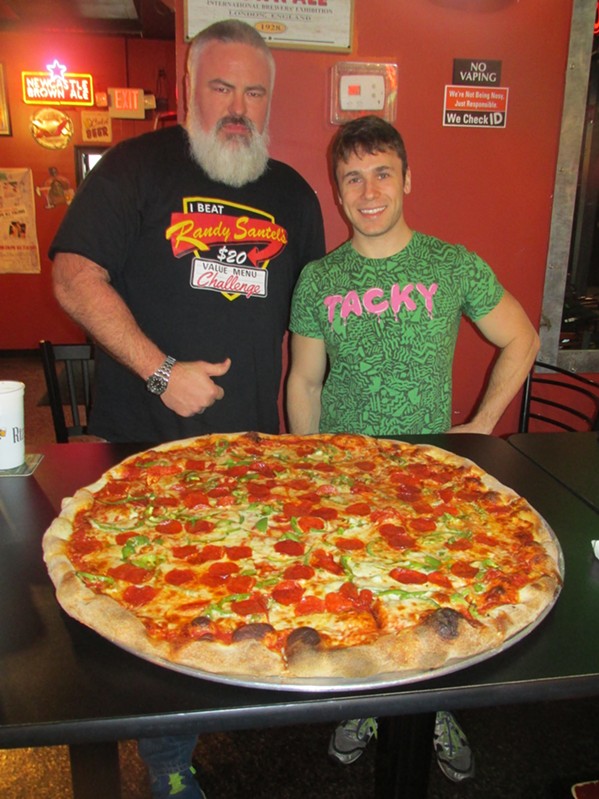 I had enough to eat after I finished two slices of cheese pizza at Rizzi’s Pizza Cafe in Arlington.


It’s hard to imagine how The Brranimal (a.k.a. Brett Healey) and Big Eater Mike (Michael Whities) felt after eating a 28-inch pizza with toppings - cheese, pepperoni and bell pepper.

I ate mine in about 10 minutes. They demolished their pizza in 31 minutes and 23 seconds.

Healey and Whities undertook the challenge to eat the pizza within an hour. They were amazing.


I’ve been following Healey to write about and videotape his area eating challenges. I met him at Aug. 20 at the Monroe Ave. Festival, where he was the first contestant to finish 40 meatballs. It took him 13 minutes. Then I watched him win the slider-eating contest at Best Memphis Burger Fest, which was held Oct. 7. He ate 12 sliders in five minutes. He came in seventh place out of 11 contestants in the MoonPie Eating Championship, held Oct. 14. He ate 24.5 MoonPies in eight minutes.


Healey met Whities at the MoonPie competition, where Whities came in fourth place. The pizza challenge was the first time they’ve teamed up for such an event.


“I have done one team pizza challenge prior to this,” Healey said.


Asked if he got in shape for the pizza challenge, Healey said, “I’ve been training all week, yeah. Eating a lot of fruit, veggies, stretching the stomach out.”


They both broke a sweat during the challenge, but they looked quite cool and calm after they knocked fist and ate the last two bits of the pizza.


Asked how he felt, Healey said, “I don’t feel as agile as I did when I walked in here. I’m a little slow.”


But not slow enough to take on the gigantic Kookamonga burger the next day at Kooky Canuck.

That story and video will be up next week. Stay tuned.

I was fortunate to meet Hilton McConnico years ago in Memphis. I believe it was in the late 1990s when Memphis Brooks Museum of Art held a retrospective of 30 years of his creations.


I remember how upbeat and friendly he was.


McConnico, who worked in fashion, movies and interior design, died Jan. 29 in Paris, where he lived since 1965.


He worked for fashion designers, including Yves San Laurent. In the late 1990s, Memphis Brooks Museum of Art held a retrospective of 30 years of his creations.


McConnico also was set designer and art director for more than 20 movies, including “Diva.” He was nominated for five Cesars - the French equivalent of the Oscar - and won one for best art direction for “The Moon and the Gutter.”


His “Cactus” creations for Daum crystal, included one presented by Francois Mitterand as a gift of state to President George H. W. Bush.


McConnico also was the first American to have his work permanently inducted into the Louvre’s collection.


“His interior design included major architectural elements and construction,” said his niece Denise Taylor. “He would recreate rooms within rooms.”


Taylor said, “He was my uncle. He was closer to my age than my mother, so he used to joke that he was really my big brother. And we were close. Incredibly.”


She remembers his “unrelenting cheerfulness and optimism and enthusiasm for life. Everything was, ‘Oh, that’s wonderful.’ ‘Isn’t that fabulous?’ ‘Let’s have some of this.’ ‘Let’s do this.’ Everything was a joyful challenge.”

McConnico, who “grew up in Memphis,” was enrolled at Southwestern at Memphis (now Rhodes College), but he met the editor of Vogue magazine in New York before he graduated. “She said, ‘You need to be in Paris.’ And off he went and never came back except to visit.


“We were really proud of him. He was a shining star in our family.”

Room in the Inn Memphis was chosen as the beneficiary of 100 Women Who Care Memphis at a meeting held Jan. 16 in the Church Health community room in Crosstown Concourse.


100 Women Who Care Memphis is a member-run organization formed to impact the local community and make it stronger.


Room in the Inn Memphis provides emergency shelters and meals during the coldest months of the year.


The group was chosen from three non-profits that “were asked to make a five-minute speech on how they are impacting our local community,” said 100 Women member Madelyn Gray. “After hearing presentations, Room in the Inn was voted No. 1 by members.”