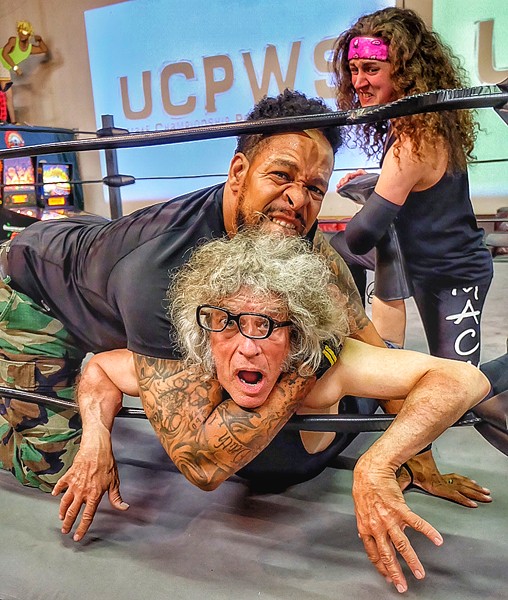 The only wrestling I’ve ever done is with my conscience. But I have to say I had a great time watching Kontar, Andy Mack and other wrestlers at the live wrestling event, which was held March 16 at the Rec Room. The wrestlers are part of Ultimate Championship Pro Wrestling South. UCPWS live wrestling will be featured the first and third Fridays of the month through the summer at the Rec Room.


The people I talked to loved the Rec Room wrestling event.

“I’m not big into wrestling, but this is awesome,” said Colin Ellis, who was with Vanessa Michalech. “They walk through the crowd while the crowd is giving them crap. It feels like everyone’s involved instead of just the people fighting.”


“I’m stoked to see this much of a crowd for Memphis wrestling,” said Chris Coles, who was with Kristen Coles, Evan Juraschka and Ben Seigel.


Stephen Thompson, who emcees the shows and does commentary, was pleased with the turnout at the second UCPWS events at the Rec Room. “We drew - if not close to - 300 the first time,” he said. “And we did a little over that this time. And we charged a cover this time.”


I got the event in time to see a wrestler named Crazy Jack enter the room carrying a little skull. I’m not sure if it was real or not.


“First time he had ever been there,” Thompson said. “And yet the crowd real dug everything that was going on with him. The guy he was facing was supposed to be the favorite, but by the end they were chanting for Crazy Jack.”


I got there late, so I missed the first match. Thompson filled me in. “A guy named Sam Armstrong from Atlanta - a heavyweight - called out one of these big guys Walker Hayes. He dove off a 15-foot-high structure in the corner of the room. It was crazy. Onto Walker Hayes and a security guard. He took out a security guard, too.” I remember getting chewed out big time by the late Fred Chisenhall, assistant managing editor/news at the old Memphis Press-Scimitar. An intern at the time, I misspelled several names of people involved in an art show. I took the names over the phone and I didn’t check any of the spellings. Consequently, the misspelled names got in the paper.


I remember getting called into the office and Chisenhall - in a very loud voice - ticking off all the names I had misspelled. Like “Alice” for “Alex.” And, he pointed out, I spelled the first name of the late Ethel Vinson as “‘Ethyl’ - like the gasoline!”


Chisenhall made an impression on me that afternoon. I was much more careful about checking spellings after that. “Chis,” as he was called, was a great newsman. I remember him, later, praising a story I did on an opera “super” - someone who takes bit parts in operas. The story landed on the front page. Chisenhall probably had something to do with that.


I was a copy boy on my last day of vacation the day Elvis died. I returned to work the next day to a much more manic than usual newsroom. I recently found out that during all the craziness at the paper on Aug. 16 - phone calls coming in from all over the world and reporters scurrying to get the story - Chisenhall wrote the famous front-page Press-Scimitar headline, “A Lonely Life Ends on Elvis Presley Boulevard.”


Well, after seeing “Elvis Presley: The Searcher,” the four-part HBO documentary on Elvis’s life produced by Priscilla Presley and Jerry Schilling, that headline really made a new impression on me. I loved this documentary, which is such a wonderful, sad Southern story. At the end of his life, Elvis retreated into Graceland. The haunting shot of the columns that grace the porch Graceland will stick in my memory like scenes from a Tennessee Williams or William Faulkner work. The entire documentary was shown March 17 at The Guest House at Graceland. Schilling and Presley attended and chatted with guests at a reception that followed the showing.


In one scene in “Elvis Presley: The Searcher,” Elvis is at the airport with a bunch of reporters around him. One of the reporters looks like Clark Gable. I couldn’t place the face. Then it hit me. It was Fred Chisenhall. And he was talking to Elvis like they were old friends!


The first part of “Elvis Presley: The Searcher” will premiere at 7 p.m. April 14 on HBO GO and HBO NOW. Don’t miss it.

I don’t remember looking much different during the “emo” period in the early ‘90s. I dressed the same and wore the same glasses frames. My hair was dark brown, though.


Those who attended “Emo Night Spring Break of Sadness,” held March 16 at the Hi-Tone, wore “old high school band T-shirts, a lot of eyeliner, fishnet gloves, a lot of skinny jeans,” said Scotty Theunissen, 29, who co-hosted and produced the event with Will King.
“People would end up spiking their hair or gelling it down over their eyes. There were a couple of banana costumes.”


This was all in homage to that early time in their lives or, for some, a time they were too young to experience. Unfortunately, I wore a tweed jacket, which made me look like somebody’s un-emo 1990s high school teacher.


“A lot of us - our age demographic - grew up with emo and pop punk and punk rock in high school,” Theunissen said. “So, of course, it shaped us, had a strong effect on how we thought our moved or what we listened to. It was a preferred way to deal with what was going on in our lives.”


Asked to describe “emo,” Theunissen said, “It’s just inherently about - how do I put this without sounding too cheesy - breakups, not knowing what to do with your life and dealing with old life coming at you. And being low key upset about it and whining a pop punk melody.”


More than 200 attended the event, which was the third “emo night,” which was founded by Theunissen and King.


Usually a deejay performs, but at this “Emo Night,” Brooklyn band “Dude Ranch and the Girl at the Rock Show” performed. 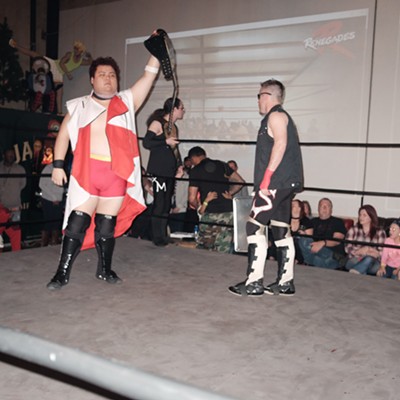 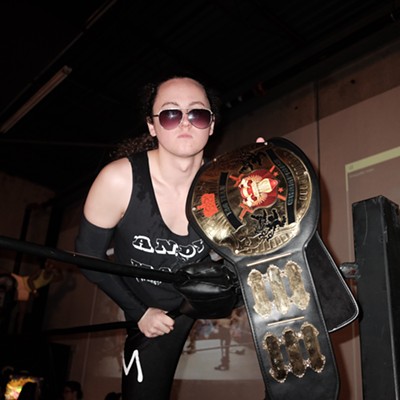 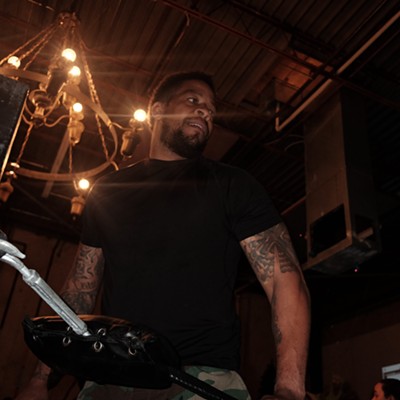 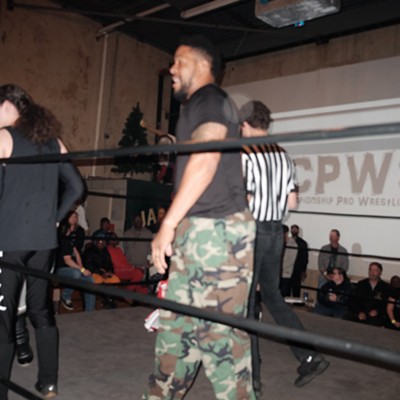