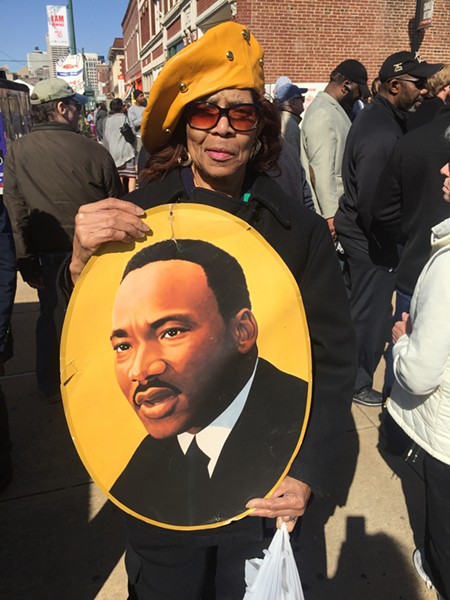 Kroger at Poplar and Cleveland showed its solidarity on the 50th anniversary of Dr. Martin Luther King Jr.’s death.


Employees wore black T-shirts with the logo “MLK 50” in gold. About 60 shirts were made for employees to wear.

Front end clerk Janice Nelson came up with the idea of the employees honoring King because their Kroger store is the closest to the Lorraine Motel, where the Civil Rights leader was slain.


Locals and out-of-towners who congregated near the Lorraine shared their thoughts on April 4.


Adrienne Bailey, widow of Civil Rights activist Judge D’Army Bailey, said, “People from all around the world come here to celebrate the life,” she said. “And nourish ourselves and regroup on where we need to go.”

"High energy, everybody's happy," said Jalin Furcon from Chicago. He was selling King T-shirts. "It's a good vibe to me right now. Sun out. You feel me?"


“This is a very important commemoration,” said Jim Van Der Meulen, who was with his wife, Trude. They were visiting from Amsterdam.


Carolyn Hill brought a large oval picture of King. “Fifty years ago I was in the ninth grade,” she said. And the day King was killed seems like yesterday, she said. “It’s etched in your memory.”


Rod Gaston, executive director of Memphis Academy of Science and Engineering, and 152 of his students walked from Jefferson and Cleveland to the Lorraine area. Students carried signs with likenesses of Dr. King.


“A lot of memories will be forged this day,” said rapper Cliff “Awkard Cliff” Johnson from Denver.