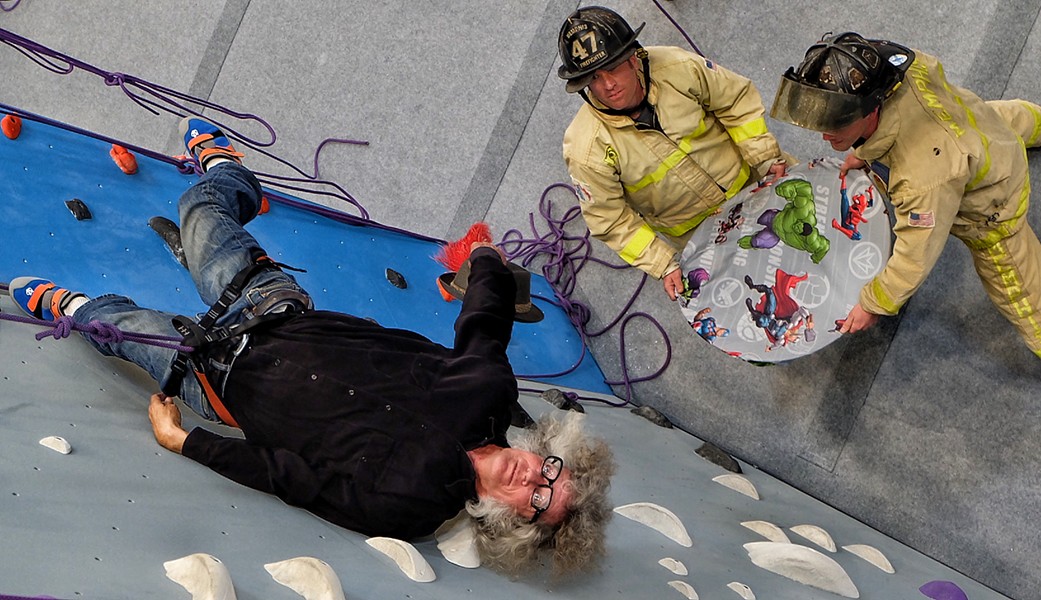 I’ve felt like climbing the walls when things got stressful, but I’d never actually climbed a wall — as in a rock wall — until I visited the new Memphis Rox Climbing + Community facility across from Soulsville. I got about half way up before I discovered I’d done enough and made some excuses about heading back down.

Well, I’ve got to say that rock wall climb left me feeling great the rest of the day. I felt like I did when I took yoga for a while. “Complacent” may be the best word.

So, why did I feel so good? “When you maintain your body in a certain position — especially a strenuous exercise — your nerve endings will recalibrate and realign to your best form as it is performing the most amount of work,” said Memphis Rox shift manager Kian Koleini.

And, he said, “Anytime you’re holding and maintaining positions, your glandular system is working. The oils in your body refresh themselves as well.”

Koleini described rock climbing as “a true challenge. A total challenge between the spirit that you have to maintain to have a strong will power to finish, the body that has to be in shape to do routes over and over again, and the mind that has to figure out the puzzle on the fly. The puzzle to get up. And the communication that happens just around rock climbing.”

Jeff McCann, 30, rock climbs three times a week at Memphis Rox. “I started about a year ago,” he said. “I guess just the athletic part of it. I really like the athletic challenge. Pushing myself. Seeing how I measure up against the other climbers.”

Ben Baker was into martial arts and boxing and played rugby in college. He wasn’t impressed with rock climbing until he tried it. “It’s a great workout,” he said.

He described it as “physical meets mental.”

I told him how my first try at rock climbing made me feel so relaxed. “In most climbing gyms they teach yoga. In yoga, the whole idea is you’re not just focusing on your body, you’re focusing on your mind, your balance and your flexibility. They go hand in hand.”

Maybe next time I feel like climbing the walls, I should just visit Memphis Rox. 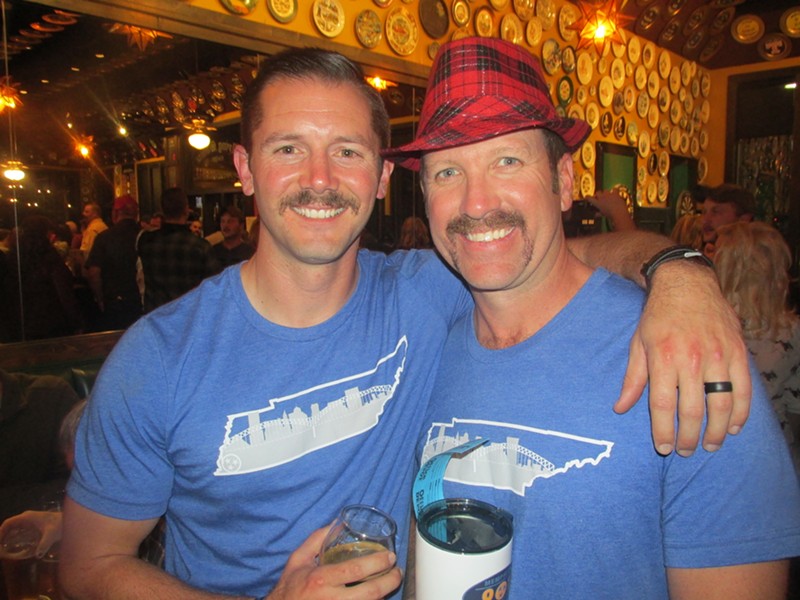 Speaking of climbing, Stephen Zachar and Shaun Taylor, firefighters/paramedics with the Memphis Fire Department, were among the 2,400 firefighters who participated in The Leukemia & Lymphoma Society Scott Firefighter Stairclimb March 11th in Seattle.

They climbed 60 floors of the Columbia Center, Seattle’s tallest building. Zachar did it in 28 minutes. Taylor did it in 41 minutes. That’s 788 feet of vertical elevation.

They do this in their full firefighters turnout. “We’re breathing out of our air tanks,” Zachar said.

“It was awesome,” Zachar said. “Sunny. Sixty two. Bluebird day. Seattle was awesome that weekend. And this stair-climb was from all over the world. You get them from United States predominantly, but you had guys from England, guys from New Zealand, guys from Australia. That adds another element. It’s the largest firefighter stair-climb in the world.

Jensen Pilant, a firefighter with the Bartlett Fire Department, didn’t make the Seattle stair climb this year. His wife was expecting their fourth child — another boy. Two years ago, Pilant did the Seattle climb in 15 minutes 30 seconds.

Pilant and Zachar raise money throughout the year, which they add to the money they raised at the stairclimb. This past year, the two firefighters celebrated their sixth anniversary raising money for the Leukemia & Lymphoma Society at the Mustache Bash Nov. 11 at the Flying Saucer Draught Emporium in Cordova.

Area firefighters raised more than $1,500 for the society. Over all, $2.5 million was raised at the climb. About $60,000 was raised at the No Kid Hungry dinner, held March 20th at Catherine & Mary’s restaurant.

“It’s a national group, but we have a local footprint in every state. So, we work specifically in Tennessee and in every other state.”

About 85 people attended the five course dinner, which began with carne cruda and smoked mackerel tonnato from Jackson Stanhope of Fig in Charleston, South Carolina. Andy Ticer and Michael Hudman, owners of Catherine & Mary’s and other restaurants, prepared the fourth-course - rabbit with king trumpet mushrooms, sunchoke and green garlic.

Davis credits “the passion of the chefs” for the success of the dinner. “Andy Ticer and Michael Hudman worked with us for a number of years and are so supportive of what is our mission.”

“They brought in those other chefs from around the country to demonstrate Memphis is a city that cares about this issue.”

This isn’t a one-of-a-kind event for No Kid Hungry, Davis says. “We’re working on plans for next year. Something lead by Andy and Michael, knowing they have so many restaurants I can see them spearheading where we are. We’ll be back again with the support of Andy and Michael.”

Guests got a sneak peak at clothing made with condoms at the Condomonium preview party, held March 22nd at the home of Kathy Fish.

The big event, Condomonium, a benefit for Choices, was held from 7 to 10 p.m. March 31st at Playhouse on the Square. Twelve designers participated.

“It features daring acts of condom couture,” said Holly Calvasina with Choices, a non-profit reproductive health care center in Midtown. “It really depends on the designers in terms of how many condoms they use. We don’t have a set rule. In general, the more condoms you use, the more likely you are to win.”

Prizes include “people choice, first and second. You get a bag of 10 condoms when you walk in the door. You put those in buckets in front of designs you love the most.”

Celebrity judges vote on “best use of condoms, most radical and most fabulous.”

The preview party was a “special party for our VIPS and sponsors to come and get an up-close look at all of the designs before the event. So, a week before anyone else sees it. See the designs up close and meet the designers. It’s a special thank you to all our sponsors for making the event possible.” 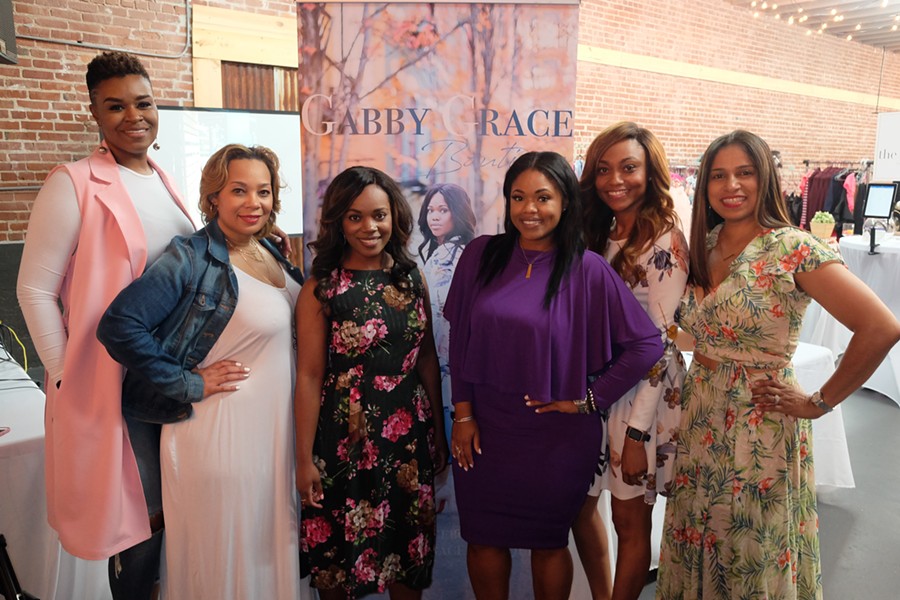 The parking lot was jammed March 25th when I visited the Sip + Shop Expo.

Odie Tolbert told me about the event, which was the idea of his wife, April Tolbert, owner of Gabby Grace Boutique, an online boutique.

“Her idea was to bring online boutiques together under one roof,” Odie said. “They don’t have a storefront. It’s hard for individuals to get in front of them.”

Fifteen boutiques, all owned by women, participated, Odie said. Between 600 and 700 people attended. It gave the boutique owners an opportunity to “be in front of their clientele to network, showcase their products.”

Sip + Shop Expo isn’t going to be a one-shot event, Odie said. “We’re going to have to do it again. Definitely annual. But we’re thinking of doing one before Black Friday. People spend their money on Black Friday.” You know a party has great potential when a Facebook announcement on the invitation reads: “I hope y’all ready to hit full freak mode.”

Aquarian Blood bass player Coltrane Duckworth was a host at a birthday celebration for Matt O’Bar and Rori Tyrell at Fort Douglass, the house where Duckworth is a resident.

Asked the name of the event, Duckworth thought a minute and said, “Spooktacular.”

It was a party for the birthday honorees, but the most popular guest was a black puppy named Lucy. 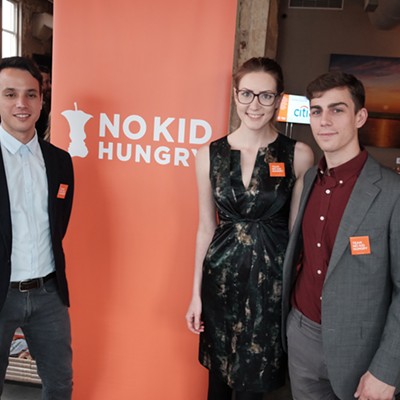