All the Food Groups: Crawfish, Steak, and Chicken.

This year’s Porter Leath Rajun Cajun Crawfish Festival could have been dubbed the “Frigid Cajun” festival. People wore coats and scarves instead of the shorts and flip flops they usually wear at the annual festival.


“We had people buying our beer cozies and using them as gloves,” says Rob Hughes, Porter Leath vice-president of development.

The festival still was fun. To me, it marks the official beginning of the spring festivals.


About 17,500 people attended, says Hughes. They raised about $50,000 net. But numbers were down because of the cold weather.


The wine and coffee vendors did well this year, Hughes says. 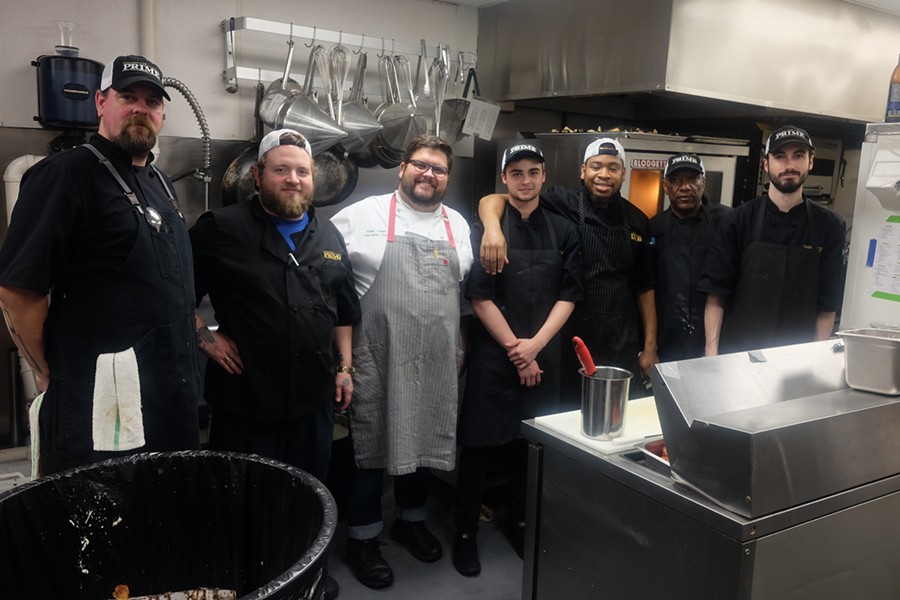 The new steak place in town - 117 Prime - opens for dinner May 4th, but guests tried steaks early at a friends and family night April 18th.


I loved my juicy sirloin strip topped with Oscar sauce. It was extremely tasty. In fact, I liked everything about the restaurant.


I asked executive chef Ryan Trimm, one of the partners of the restaurant with Roger Sapp and Craig Blondis, what makes this new venture so special. He already owns Sweet Grass and Next Door and is a partner with Blondis and Sapp of Sunrise Memphis.


“Three things, really,” he says. “One, I’d say, is moving downtown. I hadn’t made that move yet. I’m excited to join that neighborhood. A lot of good friends down there - Patrick (Reilly, The Majestic Grille), Andy and Mike (Ticer and Hudman, Catherine & Mary’s, and The Gray Canary), so it’s exciting to join that group.


“Two, I would say my partners. We did Sunrise together, which was a blast. But this is the first time we’re doing something on more of the fine dining spectrum.


“Third, it’s just doing something I’ve been wanting to do for a while. A traditional steak house. Being able to put something out that’s been a staple in this country for a long time that still attracts people. No frills to it. We’re trying to make sure we’re doing it right.”


And, another thing is “being able to play with the vegetables a little bit. Something I’ve enjoyed and adding that to the traditional steak house.”


One thing that doesn’t look “traditional’ as far as steakhouses go, is the bright interior, which was “completely a 100 percent conscious decision,” Trimm says.


He and Ann Parker of Parker Design Studios worked on the concept, which included adding mirrors to reflect light. “Make a wall of light and really clean it up. Just make it pop when you come in. I’ve always been big on clean and welcoming tones.”

Trimm wants people to “feel comfortable eating with us.”


As for that prime meat, Trimm says, “I can’t make steak cheaper than it is. Beef is expensive.”


But, he adds, “We’re going to back up the price with quality. Make sure we get it from the right people. Get the right cuts. I think we’ve done that.”

A  total of 350 pounds of chicken were sold at the soft opening of Hattie B’s, which was held on April 17th.


About 400 attended to eat and check out the new location at 596 Cooper.


The term “groaning” was appropriate for how much food was on my plate. Guests could order what they wanted from the menu. For free that night.


The chicken wasn’t free the random afternoon I drove by the restaurant to see if people were standing in line when they had to pay.


There was a line.


I bought a copy of The Shuk’s self-titled CD at the Jewish Community Partners Taste of Israel party, which was held April 19th at Memphis Botanic Garden. I’ve just about worn it out on my Toyota Corolla CD player.


“It was the culmination of our year-long ‘Israel at 70’ celebration,” Timberlake says. “And it was to create an event that everyone in the Memphis Jewish community could come to and share together. And bring Israel to Memphis.”


Memphis Botanic Garden was transformed into a Jerusalem shuk - an Israeli market. In addition to the food and music, the event featured Israeli wine tastings.


The Shuk - the band - is based in Los Angeles and New York. The group performed songs in Hebrew.


“The band went to see Dick Dale and his band at the Hi Tone after the show and thought he was real cool,” Matt says.