Herb O'Mell, Wine Down for BizTown, Frequent Flyer and More! 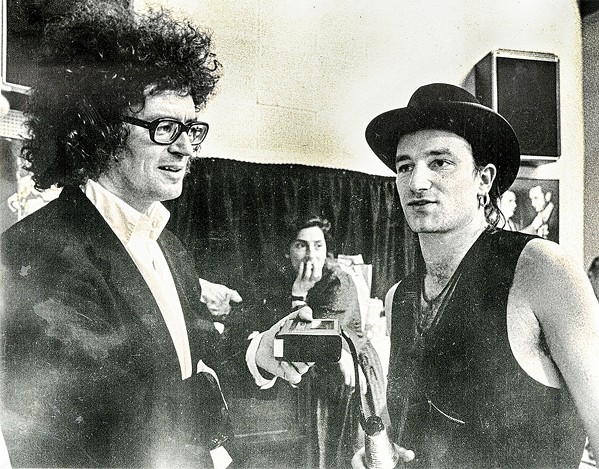 The late Herb “Herbie" O’Mell was responsible for the biggest scoop of my career so far. He told me Bono and U2 were going to record at Sun Studios. This was Nov. 29, 1987.


Like many others, I was a big fan of the genial O’Mell, who was a music promoter and manager. He always asked me, “How’s Little Red?” — referring to my old red Toyota Tacoma truck. I’m also a fan of O’Mell’s wife, Laura, and their son, Michael.

I ran into O’Mell near Beale Street while I was on my lunch break that November day. I was working at The Commercial Appeal at the time. O’Mell told me U2 would be at Sun Studios.

I somehow got into Sun’s waiting room late that afternoon.There were other people there. We could hear U2 performing in another room.


After a while, U2’s road manager came in. He asked us if anything was going on in Memphis that night, which was a Tuesday. I told him Linda Gail Lewis, Jerry Lee Lewis’ sister, was performing on Beale Street.


He thought that was so intriguing he brought me to Bono and said, “Tell him what you just told me.”


I told Bono about Linda Gail. Then Bono began to expound on Memphis, why he loved it and what he thought about Memphis music. I turned on my tape recorder, which I had with me, and got a great interview. Bono talked almost non-stop.


My story was on the front page the next day. Tom Busler, who was at the CA at the time, took the photos. He also took one of me, which he gave to me, showing me interviewing Bono. It was on my desk at home for years.


As far as I know, I was the only reporter at Sun Studios that evening. No other news organization was there. This was a dream come true. This was my story.


And I got the scoop because of the kindness of the great Herbie O’Mell, who died last week at the age of 82. 
This is how it worked: Teams of one, two, or three people brought three bottles of wine to the party. Two of the bottles were blind tasted and voted on by guests. The remaining bottle was set aside as the winning wine owner’s grand prize.


“I could not be more proud,” says the organization’s president/CEO Larry Colbert. “And that’s the honest to God’s truth.”


The event was “extremely successful,” Colbert says. “For a first-time event, it’s one of the best things we’ve done. It’s a great seed we’ve planted. Everybody who was there indicated they wanted to return. It was nothing but fun.”


And, he said, “We had a number of people who even sponsored kids for our program.”


During the party, those businesses included wine at their storefronts. “All 15 businesses had multiple bottles of wine for the blind judgings. People went through with their sipping glass and sipped and voted.”