Meatballs at Monroe Ave. Fest. And a look back at pumpkin pie. 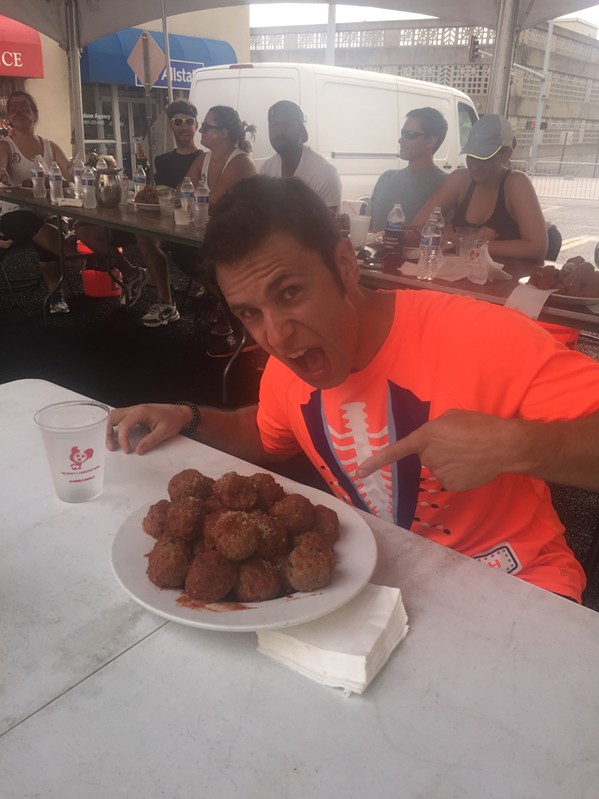 
But, on the other hand, take Brett Healey. He won his consecutive Grandma’s Meatball Eating Contest at the Monroe Ave. Festival, which was held Aug. 19th on Monroe between Front and Main. The festival also includes the Breakaway 5K. The entire event is presented by Bardog Tavern.

Healey doesn’t just win meatball eating contests; I’ve documented him devouring pizzas and hamburgers. He’s so amazing he’s earned the nickname “The Brranimal.” No one gave me a nickname.

This year, Healey consumed 40 meatballs in 9 minutes and 38 seconds. He beat his record from last year: 13 minutes and 14 seconds.


“Going in I had a pretty good idea I was going to win,” Healey says.


And, he adds, “I’ve become a better eater over the last six months.”


His 26th restaurant strategy was eating a six-pound empanada. “I ate it all. I did that in mid-July. Like 17 minutes, 50 seconds.”


To keep in shape for his food workouts, Healey consumes “huge amounts of fruits, vegetables, water. Working out a lot. You just keep working at it and you get a little bit better every week.”


This year’s meatball contest was “pretty incredible and scary at the same time. Last year, I felt pretty full afterward. I was a little out of breath. I had to strut around town and take it easy.”


This year, he was full, but, he said, “If push came to shove and I had to do 50 meatballs, that wouldn’t be a problem.” 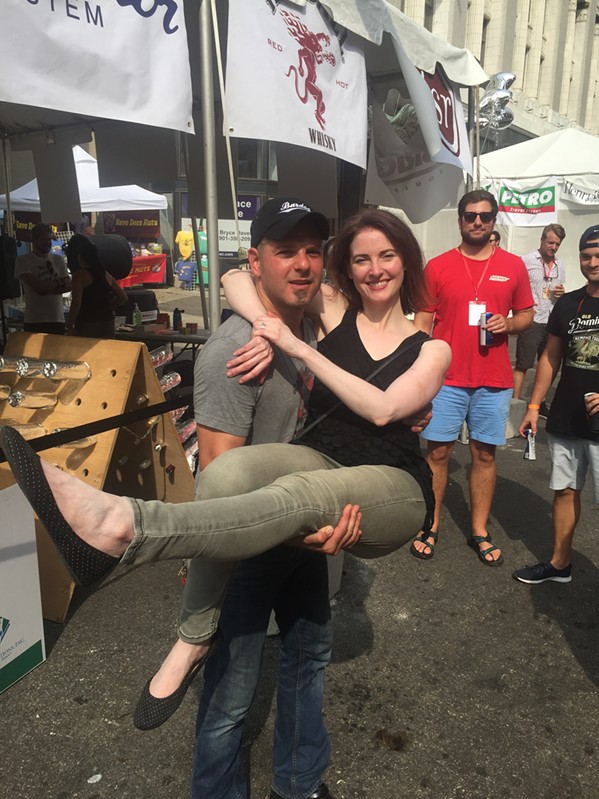 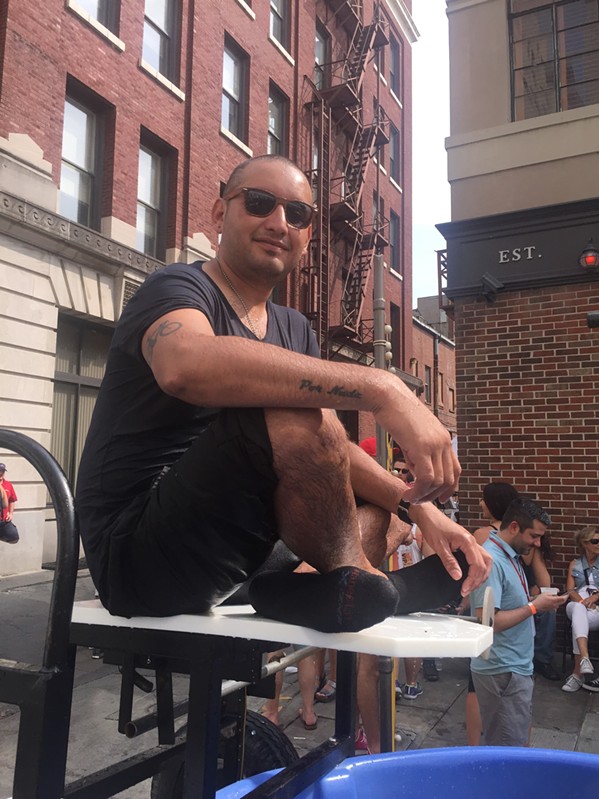 It’s a few miles or so from Brooks Museum of Art and Dixon Gallery and Gardens, but Fort Douglass also is getting in the art exhibit game.


It was Fairchild’s idea to begin holding art exhibits, which are coupled with live music. “I was in a painting class with my professor Jed Jackson and he was giving us a lecture about starting an art scene here in Memphis instead of moving to New York,” Fairchild says. “I think it was two years ago. He gave us this inspirational speech in class and I said, ‘I can do this.’ I ended up contacting everybody I knew from University of Memphis, Rhodes, MCA (Memphis College of Art) and then we started the first one.”


The idea was to “let people know what’s going on with the young artists of Memphis.”


Music has always been an important part of the art salons, Fairchild says. “We used it as a way to promote my buddies’ bands.”

Performing at the event were Wine Witch, Sky King, and Dylan Gattuso and his band. Franklin Wallace was the deejay.


The event is a “huge group effort.”


Fairchild, a studio art major with a focus in painting at the University of Memphis, included some of his paintings in the show. “I really focus on figure painting and documenting my generation and my experiences in life and sharing it with other people.”


As for his painting style, Fairchild prefers realism over abstract painting. “Putting a contemporary twist with these bizarre millennial scenarios is really an enjoyable thing for me to do.”

A total of $16,000 was raised at the annual Night at the Theatre for the Memphis Child Advocacy Center, said the center’s communications and grants manager Beryl Wight.


The theater was Playhouse on the Square, where guests saw a performance of “A Gentleman’s Guide to Love and Murder.”


The event was sponsored by the Jerry and Nina Patton Family Foundation. Proceeds benefit the children at the Memphis Child Advocacy Center.

“Thinking Cap” should have been part of the dress code for The Great Wine Performances, which was held Aug. 14th at Playhouse on the Square. Wine stations featured actors whose costume and makeup were hints to upcoming performances at the theater. Each mystery portrayal was paired with wine. Guests gathered for the Courage Through Cancer kickoff party, which was held Aug. 9th at The Brass Door. New and former honorees attended the event, which raises money for St. Jude Children’s Research Hospital.


The organization is composed of people who share their experiences with others who are fighting cancer.


This year’s Courage Through Cancer event will be Nov. 9th at Minglewood Hall.

Singer Joyce Cobb will be the recipient of this year’s Courage Through Cancer Gerry Finney Musical Courage Award.


Asked to sum up what it was like to be on the show, Mellor says, “Crazy. It is a cool show. Not for the light hearted or if you can’t think on your feet. It’s fast and furious. Everything is under a time clock. But it was a great experience. It was cool, fun, nerve wracking. Gut wrenching almost.” 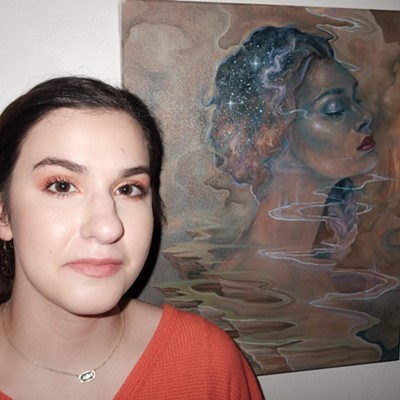 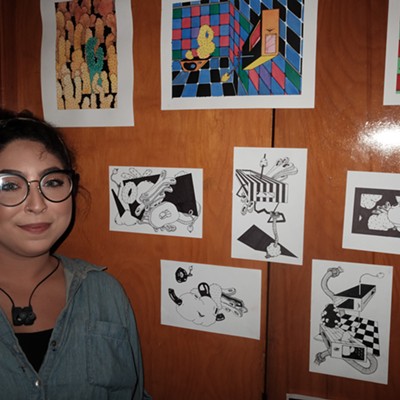 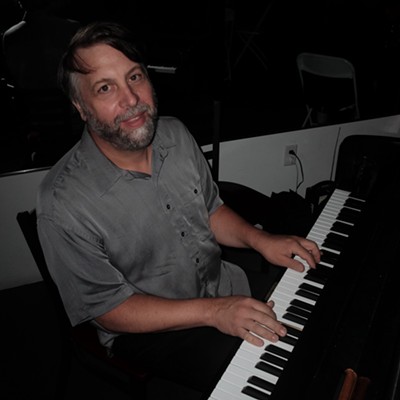 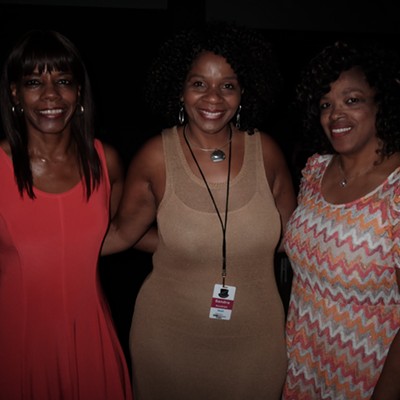 Meatballs and more!
By Michael Donahue
Click to View 190 slides