This year's Zoo Rendezvous could have been called "Zoo RAINdezvous." I've never seen so many people with umbrellas partying outside during a downpour. With thunder. And lightning.

"Strut Your Stuff" was this year's theme. Guests did just that - in the rain.

If I remember correctly, it rained at the first Zoo Rendezvous 35 years ago at the Memphis Zoo. I covered it. And I don’t believe the turnout was spectacular.

Well, it also rained at this year’s Zoo Rendezvous, which was held Sept. 8. And it still drew 2,500 people - and probably about that many umbrellas.


“This is the very first time we have had such torrential rains on my watch,” says Memphis Zoo director of events Tim Dalfiume. “This is my 12th one. The situation is if it rains the day of, the sun and the stars have aligned and it always clears up for Zoo Rendezvous.”

This year “it was torrential at its very best.”


That 2,500 attendance number is only 1,000 short of how many people usually show up for the event, Dalfiume says. “They had umbrellas, ponchos.”


For me, Zoo Rendezvous is that first big party after school begins and the pre-holidays fund-raisers really kick in. “I think Zoo Rendezvous has a great way of kicking off the fall season in Memphis,”  Dalfiume says. “It kicks of football season.”


It doesn’t matter if it rains. “People are excited about it regardless.”


And, Dalfiume says, “I thought the bands were all spectacular. And people at the end of the night were dancing all over the courtyard. They were dancing in the fountain. People had a ball. And at that point in time you just say, ‘To heck with it.’ And you let Mother Nature do her thing and don’t let it dampen your enthusiasm for a great party.”

I saw Spencer Gruber as a I was leaving and told him he was "soaking wet." He said, "That's the theme of the night."

"Only in Memphis everyone can have a good time in the rain," said County Commissioner Mark Billingsley. 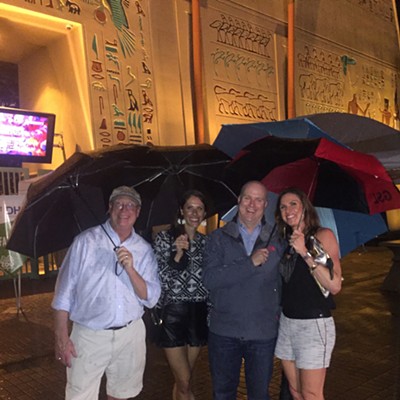