Art on Fire and more!

If getting your photo taken with Marc Gasol and Mike Conley of the Memphis Grizzlies isn’t enough to get you fired up in a good way, Art on Fire also included a giant bonfire and fire dancers, who twirled fire-lit torches and breathed fire.


Art on Fire, which was held Oct. 20, is the annual fundraiser at Dixon Gallery and Gardens. This year’s event drew more than 1,200.

The ground was damp after rain. Cory Weldon had on boots, but, he said, “It’s starting to get to my socks right now.”


The weather was pleasantly chilly. But there was fire water; guests warmed up with the appropriately named Jack Daniels Tennessee Fire. They also downed brews from Ghost River Brewing Co.


Fire is synonymous with heat, so watching members of the Memphis Fire Tribe perform with their dancing flames was enough to warm up just about anybody.


Art on Fire also included a silent auction and the Hot Off the Wall Art Sale, which featured paintings, prints, and photography by emerging and internationally-known artists.

The words to that old song, “Downtown,” easily could apply to Cooper-Young Beerfest: “When you’re alone and life is making you lonely you can always go - Downtown. When you've got worries all the noise and the hurry seem to help. I know. Downtown.”


Just substitute “Beerfest” for “Downtown.” This, to me, is one of the most fun events of the year. There’s a lot of noise and a lot of hurry as a lot of people rush to the next beer station to sample another brew.


A total of 1,075 tickets were sold to the sellout event, says Sheree Stubblefield with Cooper-Young Community Association. This year’s event, which was held Oct. 20 at Midtown Autowerks, featured 37 vendors plus two home brews, she says.


The event is a fundraiser for the Cooper-Young Community Association. Mark Morrison, the association’s president and Beerfest organizing committee chair, said, “This was our biggest in terms of number of breweries that came and the number of tickets that we sold. We’ve been pretty cautious, I would say, in growing. We don’t want it to be too crowded and lines getting too long. This is our ninth year and we’ve slowly gotten to this point. We heard nothing but good things from attendees. And brewers like to come to our event. Which makes it easier for us when we call them to invite them next year.”


So, what makes this event so much fun? “There are several ways we’ve differentiated ourselves when we started. It’s paid off well. There are so many beer festivals.”


Selling a limited number of tickets is No. 1, Morrison says. “We’re not trying to just make money here. We want it to be a good experience. Most people would agree there are hardly any lines at our event. Of, if there are, they’re pretty short. Unlike others where you stand in line all night and wait for the next shot of beer.


Finally, he said, “We’re focusing on our region of the country. We don’t invite brewers from California, for example. We want to focus on our area and, really, it’s more about quality than quantity, in general.” 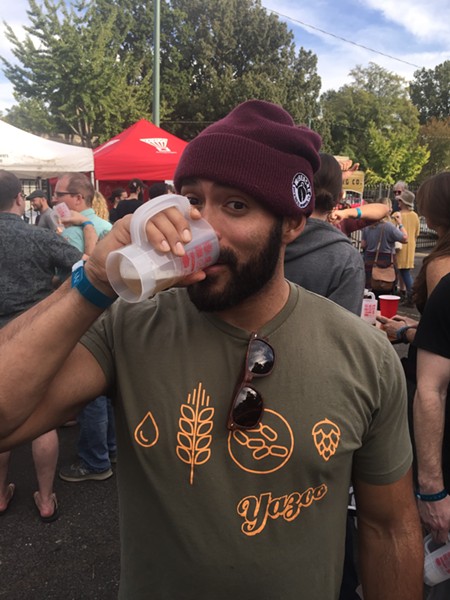 Graham Winchester released his single, “Prisoner of Love,” just in time for Halloween.


“It’s supposed to be a Halloween song,” Winchester says. “I released it as a Halloween single. I did it early - October 5 - because Christmas is celebrated all month long. Lots of people I know like Halloween more than any other holiday.”


Graham and his band, Winchester & the Ammunition, performed the song at the Lamplighter Lounge.


The song doesn’t mention black cats, witches, and skeletons, but it's got other scary stuff. “It’s Halloween in the sense that it’s got all the imagery. It doesn’t say anything about Halloween, but it makes the metaphor of being in a dungeon in a castle with the trees and the wolves and all that, but it’s a metaphor for being a slave to somebody in a relationship.”


Winchester wrote and recorded the song himself. “I released it under the band’s name, but I did the songs all late at night by myself. It was mastered by Jacob Church.”


The drums and piano were done at American Studios. Winchester “added everything on top of it in the middle of night at home.”


What time? “Probably midnight ‘till 3 in the morning.”
Midnight. The witching hour. Very Halloween appropriate.


Winchester released the song in conjunction with an art show by Justinedwords.


“It was a collaboration in a way,” Winchester says. “We just wanted to use his artwork to create a different kind of vibe for the Halloween song release. We wanted to cover all the walls of the Lamplighter with his art so when you walk in it’s an attention grabber. A different atmosphere there that night to go along with the Halloween theme. A lot of his art is psychedelic and surreal. I liked the idea of having his art in there the night I was doing a Halloween song. It kind of helped that Halloween atmosphere.”


Justinedwords describes his work as “colorful word spirals that intersect in spontaneous places.”


Calligraphy formed a big part of this process, he says. “Many of the word choices are dictated by their glyphs and curvatures. Most of the works are on paper, but they’re mixed media collage. So, it can be ink, acrylic, sometimes oil. Usually it’s pen that I use.”


His work is very spontaneous, Justinedwords says. “It’s process-oriented art. So, I’ll be doodling freehand. Usually with a calligraphy pen. A parallel pen. It’s a pen that uses cartridges. You don’t have to dip it like most pens. The line width is dictated by the angle width of the way you hold the tip of the pen. The pen looks like a little razor.


“When I first started doing this I was more focused on poetry. I’d write poetry with calligraphy. When I say ‘calligraphy,’ I wasn’t doing it as a strict, by-the-book calligraphy. I was making up fonts and making things look frilly. Really a lot of curls. A lot of things that would curl around. And I usually would use a circular pattern, which is still evident in my work.”

MIFA celebrated its 50th anniversary with a “Golden Gala,’ which was held Oct. 11 at the Hilton Memphis.


A total of 650 people attended the event, which included a seated dinner and music by the Jim Spake Quartet and The Soul Shockers.


The event included an announcement of MIFA’s anniversary gift to Memphis: MIFA Center for Community, an interactive website, which will be devoted to volunteer service. It will connect volunteers with engagement opportunities and feature educational material, training tools, and advocacy resources related to seniors, poverty, homelessness and interfaith for families, individuals, and faith groups.


Ave Maria supporters were honored at the “Gala Celebration” presented by The Ave Maria Foundation and Wings of Ave Maria. The event was held Sept. 30 at TPC Southwind.


“Our Gala Dinner is a wonderful opportunity for us to recognize and thank our honorees - Dave and Donna Nelson, Dr. Bob and Bea Wilson, and Henry Brenner who have been involved with Ave Maria as donors, family members, board members, and volunteers for many years,“ says Ave Maria Home executive director Frank Gattuso.
The recipients “have given generously of their time, talent, and treasure and are truly helping to make our community a better place for seniors to live and thrive.” 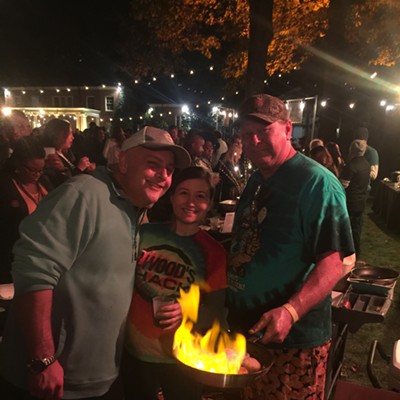 Art on Fire, Beerfest and more!
By Michael Donahue
Click to View 66 slides