I wondered if anybody still celebrated Halloween with a party on Halloween. Not the weekend closest to Halloween, but on Halloween.


So, on a whim, I asked some costume-clad revelers leaving Kroger at Union when I was in there October 27th if they knew of a Halloween party taking place on October 31st.

Sarah Thompson said residents at University of Tennessee were having a party on Halloween night in Midtown. I asked if I could cover it. She texted a few days later and said the host would love for me to attend.

On a dark and stormy night, I parked near the house. The party was at the home of Travis Kauffman and Jill Palchinsky. Spooky lights and headstones graced the front yard.


Palchinksy said she and Kauffman and most of the other guests were pediatricians.


“We’re not pediatricians,” Kauffman told Palchinksy. “Because you’re a maid and I’m a bellhop.”

He explained their costumes to me. “We’re Disney-themed characters. I’m the bellhop from the House of Terror. She’s the maid from the Haunted Mansion.”


When he got out of character, Kauffman said they all love children - obviously - and they have lots of trick-or-treaters.
This is the third year they’ve held the Halloween party, he said.


I took a photo of their great-looking front yard, got in my car and drove off - only to find out I had a flat. That was my Halloween surprise. Three nails in the tire. I called my insurance company and they sent Mow Decher with Flash Roadside Service to change my tire. Wearing a Halloween costume, Decher put on the donut. 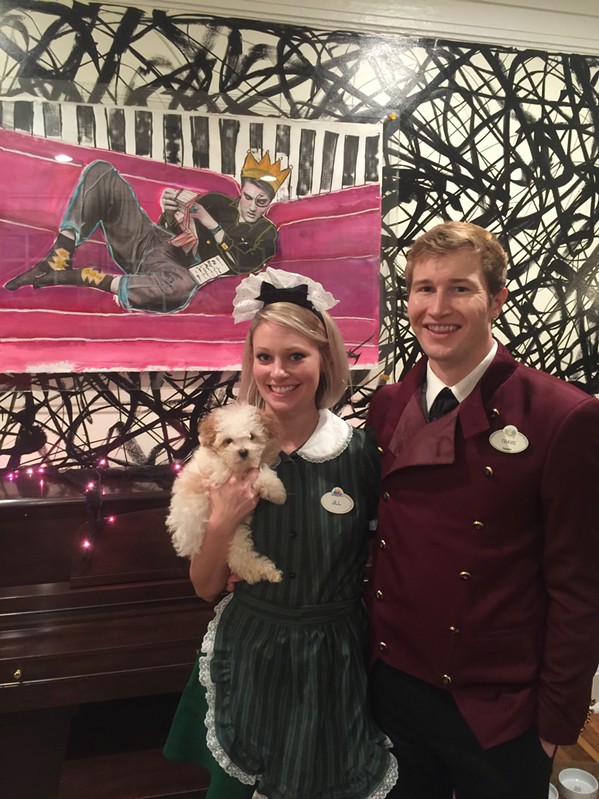 Meat Me in Memphis is an event I look forward to each year. It’s not your average party.


It’s the sole fundraising event for the Monogram Loves Kids Foundation, which was created as part of the commitment by Monogram Food Solutions to give back to the community.


Area chefs served dishes made from one Monogram Foods product as well as signature items from their restaurants.


Silent and live auctions were included. Entertainment was by the extremely talented members of Sound Fuzion from University of Memphis.


Over the last seven years of Meat Me in Memphis events, almost 90 percent of all funds went directly to the charities selected by the team members.


And, according to Monogram Foods communications coordinator Alix de Witt, this year’s event was a success: “We had about 700 attendees and we raised over $60,000.”

I’ve been a judge many times at the ASBEE Kosher BBQ Competition and Festival at Anshei Sphard-Beth El Emeth Congregation. This year I judged the brisket. I had a blast, as usual.


They had a record number of barbecue teams, says Martha Wagerman, chair of the judging tent. They had 40 this year. “That’s more than normal,” she says. “Usually, it’s around the 35 mark.”


And, says Wagerman, former executive of Anshei Sphard-Beth El Emeth women’s congregation, “As far as guest visitors there, my understanding is that it was one of the biggest crowds they ever had. They said something about 6,000 or 7,000.”

Pat Kerr Tigrett held a soiree at her downtown penthouse apartment to watch the unveiling of the new lights on the Hernando de Soto Bridge.


The invitation to the October 27th soiree read, “Please come to cocktails at sunset! To celebrate the bridge and its exciting new look.”


And, it read, “Ol’ Man River got lit - (for the first time) - 32 years ago creating a bright, welcoming iconic bridge for our great river city. This memorable evening was co-chaired by Henry Turley and Pat Kerr Tigrett.”


It was her idea to light up the bridge more than three decades ago, Tigrett says.


“It was,” Tigrett says. “I was living in London and all the bridges were lit beautifully. And Paris and all over Europe. And they’re so pretty. And that ‘M’ bridge was built in ‘73, the year John (Burton Tigrett) and I married.’”


She thought: “This is ridiculous. The only lights on the bridge at night - it was so black and dark - were the Memphians returning at 11 from the racetrack. That was it.”


Tigrett says she said to then city mayor Dick Hackett, “We really need to put some lights on the bridge.”


She also mentioned it to then state senator Jim Sasser one evening when he was visiting at her penthouse. “He walked out on the patio and he was talking about the expanse of the river and the view. It really is spectacular and it changes every day.”


Tigrett said they really ought to have lights on the bridge.


She says Sasser told her, “You know, I believe this will be a menace to aviation if we do not light this bridge.”


“He was teasing,” Tigrett says.


Hackett told Tigrett the next day, “OK. Are you ready to be in charge of this?”


He said, “Henry Turley is going to help you.”


Asked what she thought of the new, colorful LED lights on the bridge, Tigrett says, “I like this, really. They have a lot of energy and excitement about them. I just love the whole thing. I particularly like the way that they’ve left the lights where the original lights were. So, when it isn’t in colors and doing things and celebrating holidays or whatever it is - football or basketball wins - it reverts back to the simplistic, sort of charming lights like it’s been for 32 years.


“They invited me to come down to see the early rendering of it. I said, ‘I have one request."

She wanted them to put the LED lights in the same places they put the old sodium vapor lights.


They originally sold 1,000 lights at $200 a piece, Tigrett says. A plaque near the escalator at Mud Island River Park lists the names of those donors, she says. “ A couple wrote the sweetest letter to me saying, ‘I cannot thank you enough. We come down every night and sit in Tom Lee Park where it’s very peaceful and watch our son’s light come on.’”


When they began replacing the old lights with new ones, Pat asked if she could have the old ones. “What I want to do is to have something for all the people and give them back their light.”

Pittsburgh-based artist Matthew Naftzger was impressed with this year’s revamped RiverArtsFest. Instead of scattered about on South Main and its side streets, this year’s event lined up the booths side-by-side on both sides of North Riverside Drive.


“It lets the show be the show,” says Naftzger, whose paintings were for sale. "People get to fully experience the show for itself. Instead of looking at six booths and going, ‘Oh, let’s go to a restaurant,’ I felt it became a more enveloping experience - the show and the river.”


RiverArtsFest creative director/scholarships coordinator Chuck Mitchell says, “I think it went great with the new location. I’m not sure yet if it’s a record. Everybody loved it. We hated to lose our community we had grown with - South Main - all those years, but with hotel construction and trolley construction, we lost 50 or 60 booths and really had to move somewhere.”

Artists were pleased with the new location, he says. “It didn’t hurt we had great weather both days.”


RiverArtsFest will be at the same location next year, Mitchell says. After that? “We’re going to evaluate and see.”

The slider eating contest at this year’s Burger Fest, which was held October 27th at Tiger Lane, was a bit different. Memphis area high school coaches were the contestants. 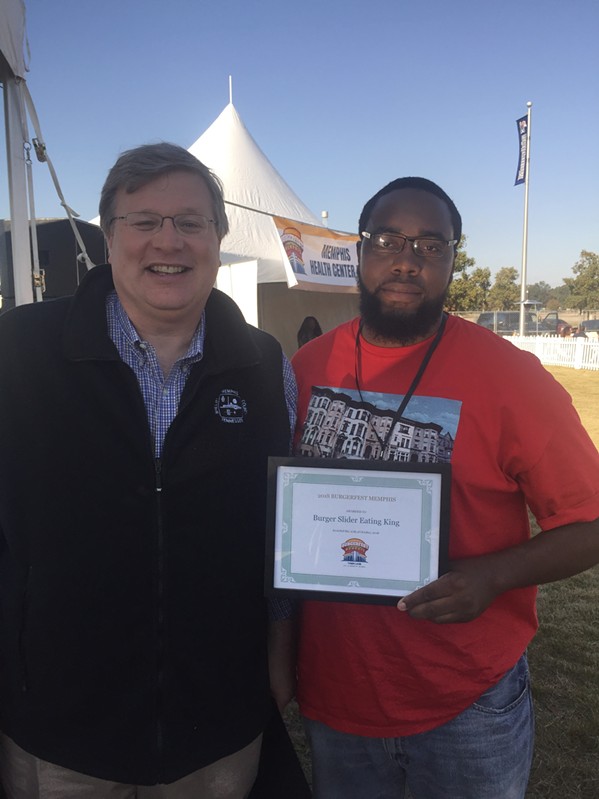 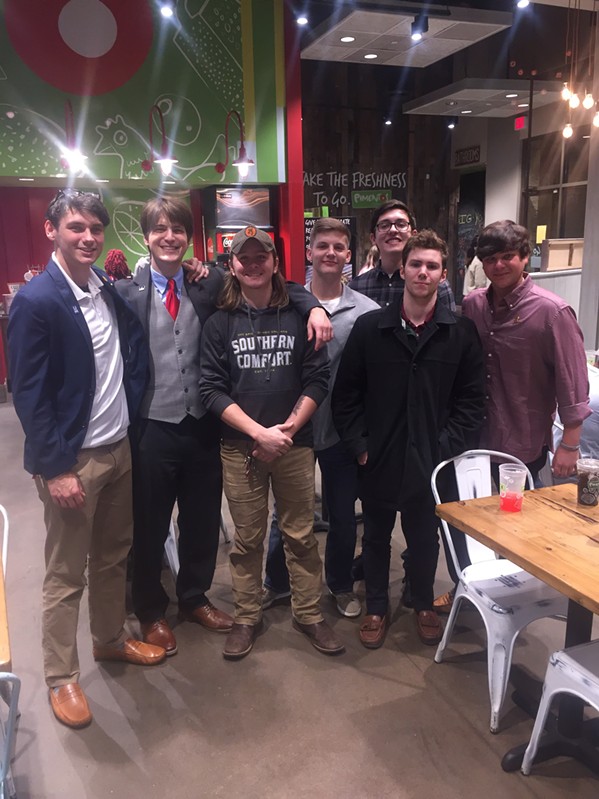 Bayley Shields, president of Kappa Sigma fraternity at University of Memphis, loves pumpkin latte and “pretty much anything pumpkin,” he says. “Anything harvest theme.”


So, it was fitting that Kappa Sigma’s fundraiser, which was held October 26th at Pimento’s, was titled “Autumn Leaves.”

Proceeds from the event went to St. Jude Up Till Dawn, says Doug McClew, Kappa grand master of ceremonies. 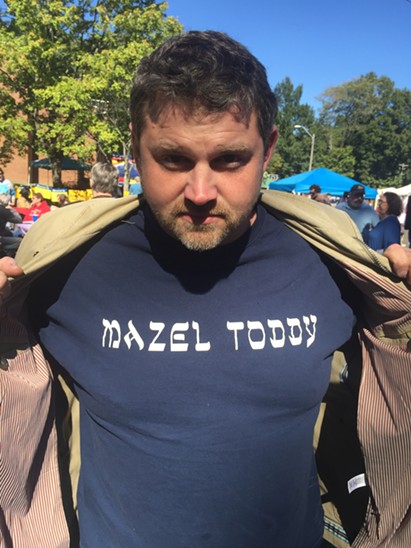