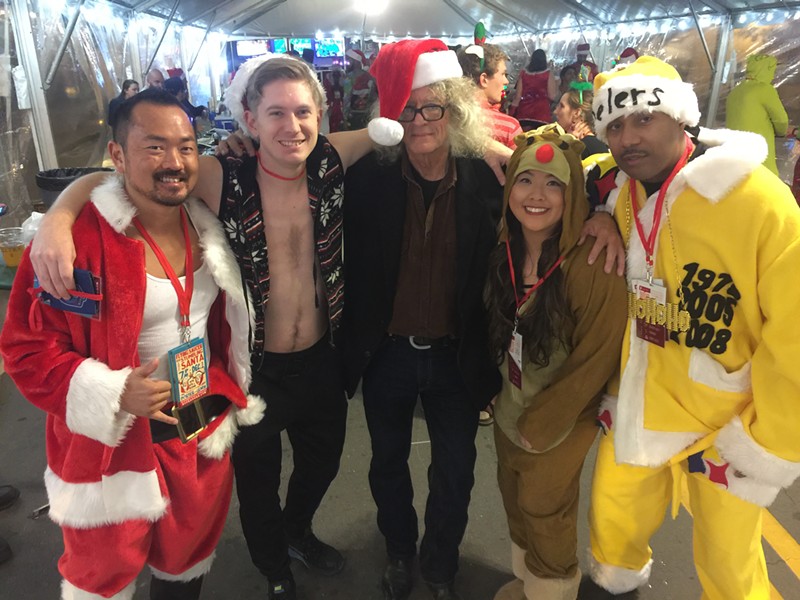 
The event, held December 1st (it’s always held the first Saturday of December), is when men and women dress as Santa, elves, reindeer, Christmas presents, and even Jesus, Mary, and Joseph and make the trek from Flying Saucer Draught Emporium Downtown to Beale Street watering holes.

Stumbling Santa was extra special for Mr. and Mrs. Santa Claus a.k.a. Bob Wilhelm and Carolyn Rock. It was their second time to participate in the event. The last time was in 2010 — the same day Wilhelm proposed to Rock.


Wilhelm popped the question after they both ran in the St. Jude Marathon. “We finished inside the ballpark — AutoZone Park,” Wilhelm says. “We walked out on the field. I bent down on one knee. She thought I was fainting and she crouches down.”


They both were wearing shorts and T-shirts. “I had the ring wrapped in tissue in a little plastic bag pinned inside my shorts.”


Later that evening, they participated in Stumbling Santa, which Wilhelm described as “fantastic. Carolyn would show her ring and somebody would buy us a drink and they would cheer for us. It was fun.”


They moved to Chicago two years ago after Wilhelm had a job change. They returned to Memphis and participated in the half marathon. They then donned their Santa outfits and did the pub crawl.

Or part of it. “We started and we went to two more places. We didn’t get to Coyote Ugly. We probably went to bed at 11. We're old." 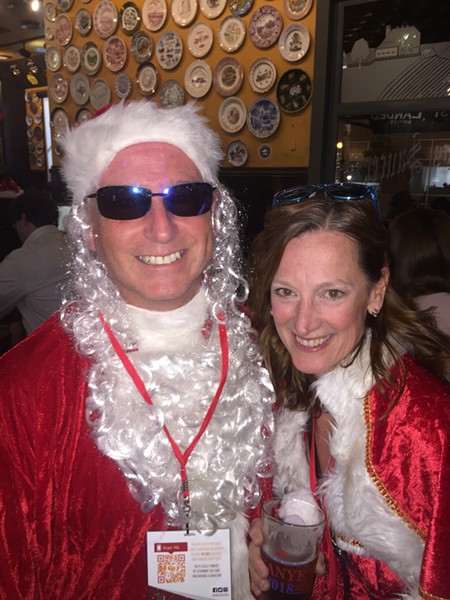 
That’s what happened November 30th during “Delight at Concourse,” the holiday lighting ceremony at the Crosstown Concourse.


Around 5:45 p.m., 7,500 lights on 76 lighting strands measuring 8,000 feet — in the shape of a Christmas tree — were turned on inside the Central Atrium. And shortly after, snow began to fall. The fake snow is called Snowbiz, says Crosstown Arts communications coordinator Bianca Phillips.


Kids played in the white stuff as if it was the freezing kind. A few children were seen making snow angel angels. Snowbiz angels.


Upstairs, the Crosstown Arts open house was held. Today & Always restaurant, the Art Bar, the galleries, and even the residency studios and the theater were open to visitors.


The open house was “a chance for the public to come out and explore all of our Crosstown Arts spaces at the same time,” Phillips says. 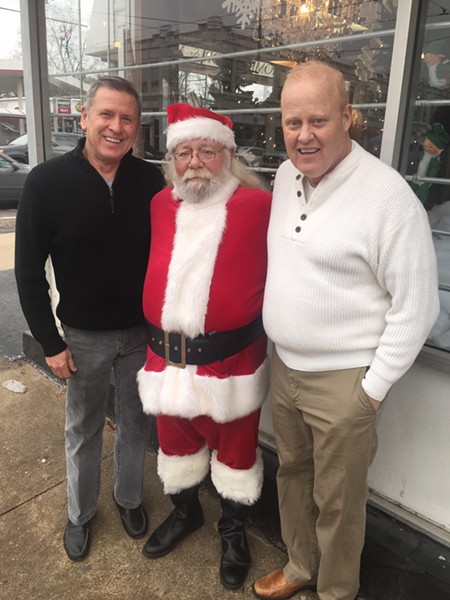 It takes a village to make a village — or an enchanted forest.


The window at Market on Madison reminded folks of the old Enchanted Forest, which was a seasonal attraction at the old Goldsmith’s department store, according to Chuck Guthrie, who owns the store with Larry Tyger.


Guthrie and Tyger put the window together at their store. Lisa Faye Veto loaned them the Christmas trees and elves. “Larry has a brother that had the car and tricycles," Guthrie says. "We went out and bought a lot of cotton. We bought some large snowflakes. Larry hung all the snowflakes. I put all the stuff in the window with his help. And it just kind of evolved.

“Pretty much everybody who came in said it reminded them of the old Goldsmith’s Enchanted Forest.”


But then came the piece de resistance. “This gentlemen already had been in the store and came in the second time. He said, ‘You know, I’ve got the original Santa and Mrs. Claus from the Enchanted Forest.’ I said, ‘No way.’ He said, ‘You guys might be interested in getting them.’ I said, ‘I don’t know know whether we can afford them, but we’d give you a place to use them.’”


The man said he’d bring them and we could “put them in the window as long as we need them.”


The window - complete with Mr. and Mrs. Claus -  is getting a lot of traffic, Guthrie says. “You definitely see a lot of cars slowing down.”


The window display will be up until the week after Christmas, Guthrie says. The store, which sells antique, vintage and retro items as well as gifts, decor, and local art, is at 1399 Madison at the corner of Cleveland and Madison. Market on Madison’s open house was held December 1st and 2nd. 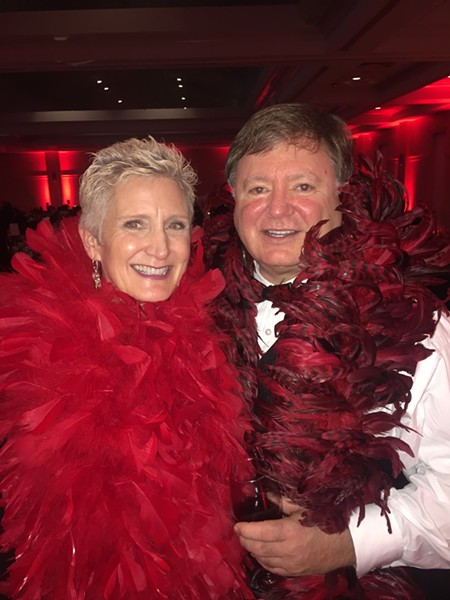 The Red Boa Ball, the annual benefit for America Red Cross of the Mid-South, was another record breaker.


“This year we broke a record on the most money raised the night of,” says Alice Higdon, who chaired the event.


A total of $150,000 was raised at the event, which was held November 17th at Memphis Botanic Garden. Three hundred and fifty people attended.


This is the party where guests — men as well as women — are encouraged to wear red boas.


Coletta’s provided the food and Jamie Baker and the VIPS, the music.

The Theatre Cafe at Playhouse on the Square was turned into a speakeasy for “Speakeasy on the Square,” a fund-raising cabaret to celebrate the theater’s 49th birthday. It was held November 17th.


More than 80 people attended the event, which raised about $14,000, says Playhouse director of community relations Marcus Cox. “The funds raised will go to repairs in our scenic and costume shops,” he says.