901 Wrestling is the new name of UCPWS (Ultimate Championship Pro Wrestling South), the wrestling matches that take place every other week at the Rec Room. The name change was announced at its January 19th event.

“It’s been on our mind for a while,” says Stephen Thompson, an owner of the independent wrestling company “We never liked the name UCPWS. It was hard to pronounce and hard to remember. So, we were just trying to look for something to change to.”


They gave it some thought. “It’s kind of a rule in wrestling where you don’t want to be too local with the name if you want to branch out. But the Memphis crowds have been so good to us. And we’ve had so much success here over the year. With the 901 craze, what’s more Memphis than 901? The whole 901 craze (of) naming things you see everywhere now, we've got to get on board. What’s more Memphis than that? When someone hears ‘901,’ they know immediately it’s Memphis.

“We want to be Memphis everything. We’ve had thoughts of transitioning all the entrance themes to local Memphis artists. And the sponsors we’re going after, they’re all local. We’re trying to be 100 percent on everything.”


“So, what I set out to do when we did the design on it, I wanted to throw in themes that were Memphis-centric. So, that’s why at the heart of the belt is the city. That’s the skyline you see at the center of the belt.”


The skyline includes The Pyramid and the Hernando De Soto Bridge. “We could put our own logo there, but, to me, this is not about us. It’s about bringing something back to Memphis that shouldn’t ever have gone away. We put the city right there at the heart of the belt.”


The side plates include a tiger for the University of Memphis Tigers and a grizzly bear for the Memphis Grizzlies, which are among the “things written into the DNA of Memphis,” Jax says. “There’s music. There’s basketball. And there’s wrestling.”


901 Wrestling currently has 20 to 25 wrestlers on the roster, Thompson says. Most of the wrestlers are based in the area. “We pride ourselves on using a lot of our own local guys and not trying to bring in big names or anything," he says. "We get big crowds regardless. We’re trying to be our own thing.” 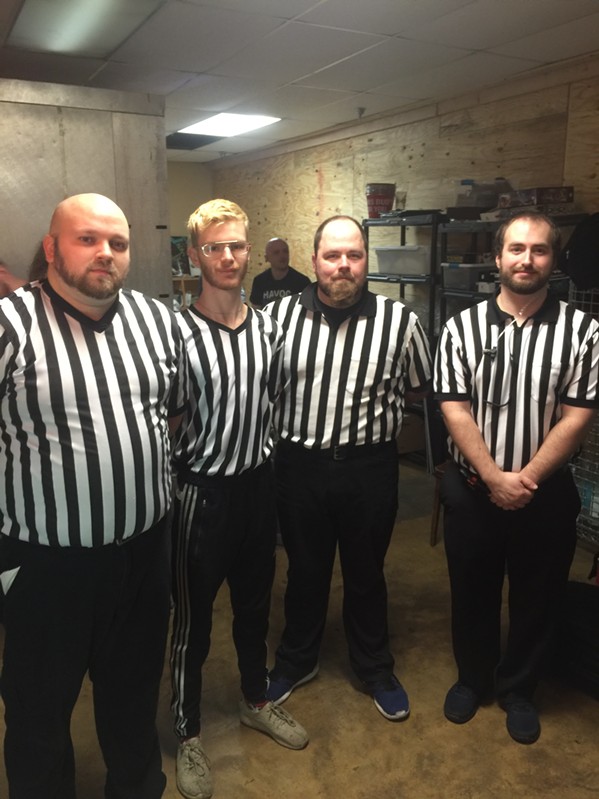 Josh ”Next Level” Matthews recently has been a good guy, but he’s been a bad guy, too.

Matthews is one of the wrestlers on the 901 Wrestling roster.


“Most of the time I’m the bad guy,” says Matthews, 28. “Recently, I’ve had a change of heart and I’m doing the good guy a little bit to see how the fans like me. And get on their good side a little while.”


What does he do to become the “bad guy" wrestler? “Choking and low blows here and there. Raking the eyes with fingernails. Scratching the eyes. Running your fingernails down somebody’s throat. Hanging them over the ropes and choking them.”


A native of Tupelo, Matthews began wrestling when he was 14. His dad, Wayne “Bad Boy Burns” Blaylock, wrestled 22 years. “I actually started wrestling illegally in Mississippi. You were supposed to have a Mississippi wrestling license and be 18 and trained and all that. But I was 14. Everybody knew me. I kind of stood on my spot. I would put on some clothes over my wrestling attire and once the commissioner left, I would have my match.”


Matthews, who weighs 190 pounds, looks leaner than some other wrestlers. “I actually started working out again. One of my friends used to call me a 'wasted piece of muscle.' I was all muscle and ripped, but I would just sit around and play Playstation and eat Baconators - the real big burgers from Wendy’s with all the bacon on it. It comes with like three patties. I’ve tried to get fat, but it won’t happen.”


He also looks like he might be in a rock band. “I can break instruments. I did break a guitar over somebody’s head.”


Asked how he got the name “Next Level,” Matthews says, “When Tommy Jax started managing me. One night we had our match and he looks at me, ‘Dude, you’re on another level.’ And he called me ‘Next Level’ one night on the microphone and the crowd just fell into it.”


Matthews, who wrestled in Indiana, Illinois, Louisiana, Arkansas, and Alabama, says, “Right now, I haven’t taken any bookings other than the 901 Wrestling.”


He’s a fan of the wrestling company. “I like 901 Wrestling because we’re going with the change wrestling is going through, but we still have that old school mentality.”


They believe in “keeping it traditional” at 901 Wrestling, Matthews says. “Like keeping wrestling the way it should be and still having moves they may have not done in the ‘80s and ‘90s. Climbing on the rope and doing a 450 splash. One front flip and a half of a flip and you splash your opponent.”


Splash? “Going for the win. You splash somebody, you land on them belly to belly.” 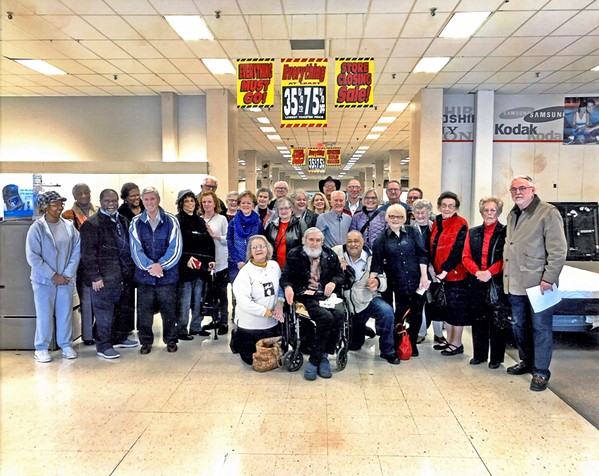 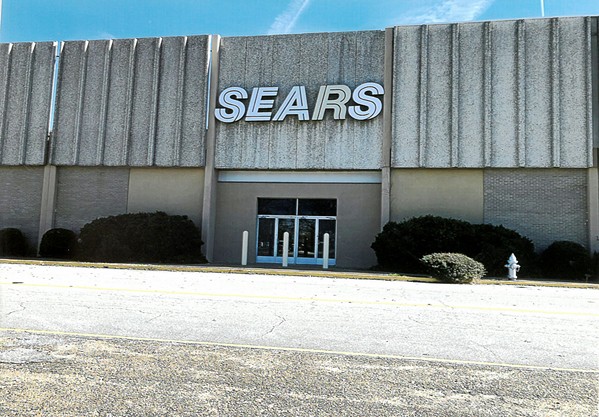 The closing of Sears Southland Mall on January 27th will mark the end of an era for the once retail giant. That’s the last Sears store in Memphis.

Frank Sampietro, who worked for Sears for 43 years, organized a reunion of former employees. About 60 retirees met at noon on January 21st at Sears Southland Mall. They took a final walk through the store, touring the sales floor and offices they used to work in.


“It’s been coming and we all knew it for a long time,” says Sampietro, 79. “But we were all happy and sad. Happy to see each other. Some we hadn’t seen in years. But sort of sad ‘cause we remember the good times. We were all together. All full-time employees. We were one big family.”


Sears at one time was “the largest employer in the city of Memphis with as many as 11 stores/units,” Sampietro says. About 4,000 people worked for Sears “during its heyday in the ‘60s and ‘70s.”

The smaller Sears stores in the Memphis area are "independently owned franchise stores. As far as we know, they will remain open."


A graduate of Christian Brothers High School, Sampietro went to work at the old Sears Crosstown in 1959 after he got out of the Air Force. “I started working in the old customer service behind the original furniture department. And I was working part time there going to Memphis State.”


He met his wife, Jo, at Sears Southland Mall. “She worked in the candy department. I was the manager of the sporting goods department. We’ve been married 47 years.”


Sampietro, who retired eight years ago, first retired as appliance manager from Sears Laurelwood, but, he says, “They called me back and I worked six years as district manager for the home improvement side of the company.”


He didn’t get a gold watch when he retired, but, he says, “I got a gold pin with a little diamond in it. That was about it.”


Sampietro described the years he and his co-workers spent at Sears at “just an unending journey from the time we started to the time each of us individually retired. As we retired, we noticed things were changing.”


For instance, they put in center aisle cashiers. Previously, individual departments had individual cash registers with people manning them.


People hated that and, after a time, they put the registers back in the departments, Sampietro says.

“There were the nights when Elvis shopped

We were ordered ‘stay put, do not leave’

He bought his shirts, jeans and underwear

When he left us, how we grieved.” 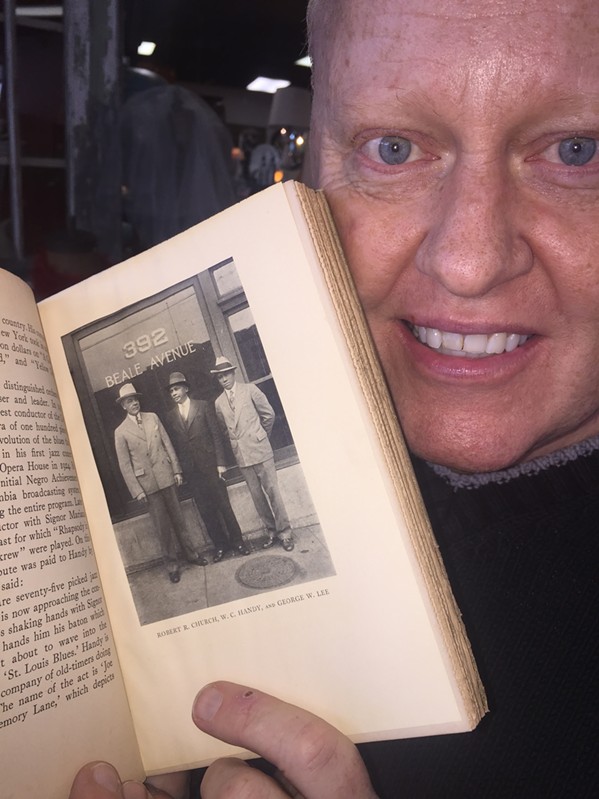 Chuck Guthrie wants to know “what are the chances” of him discovering a circa 1934 book, Beale Street - Where the Blues Began the same week the International Blues Challenge takes place in Memphis.


It was sitting in his showcase at Market on Madison, which he owns with Larry Tyger, but he never looked at it until recently. “Several times during the week someone will come through and say, ‘Hey. I’ve got such and such. Will you give me a few dollars for it?’ It may be a piece of art, might be a book, little antiques.


“This has been half a year ago. A gentleman came in and he had a few knick knacks and a couple of books. He said, ‘I think that one book [the Beale Street book] might be something. But everyone who comes in says, ‘It really is old and it’s an antique.’ I usually give them two or three dollars to give them lunch or bus fare.”


He put the Beale Street book in the showcase without putting a price on it. “I never looked at it. Then Sunday afternoon, I decided I was going to make things in the case look better.”


He started to arrange the books. “I picked up the book and it said, ‘Beale Street. Where Blues Began.’ I said, ‘That’ll be interesting.’”


The book, which was was written by George W. Lee, includes a forward is by W. C. Handy.


Guthrie went on line and found a copy of the book that was selling for $1,550.


If anybody wants to look at the book and talk to him about it, Guthrie says to come on down to Market on Madison at Madison and Cleveland. He still hasn’t put a price on it. 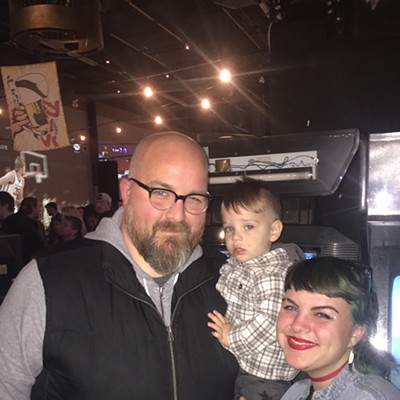 Michael Donahue's We Saw You Slideshow