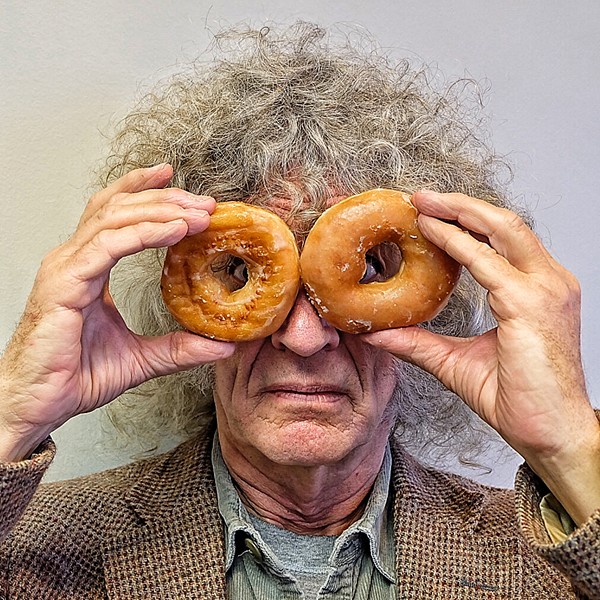 Everybody likes to eat a dozen glazed doughnuts after they’ve run 2.5 miles, right? And then immediately run 2.5 more miles?


That was the premise of the Krispy Kreme Challenge, which was held February 2nd on Beale Street.

“We’re doing the unofficial Krispy Kreme Challenge that takes place annually in Raleigh,” says organizer/participant Brett Healey. “It’s a fund-raiser in Raleigh and, fortunately, we’ve turned it into a fund-raiser in Memphis for Breakaway Running.”


Participants had to run, eat a dozen doughnuts, and run some more — all under an hour. That was the challenge.


“I don’t mind the running, but eating a dozen doughnuts in the middle of the run is going to be a challenge,” says Richard Murphy, who wanted to run to “support the local running community.”


He ended up winning the run. He came in well under an hour.


“We, actually, went to breakfast afterwards,” he says. “We went and grabbed brunch. Had some fried chicken and waffles.” 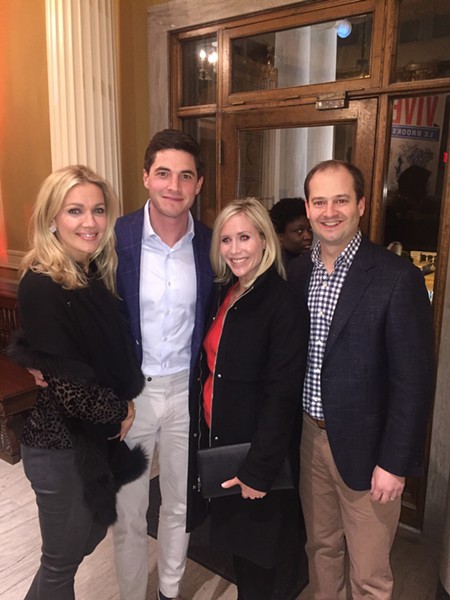 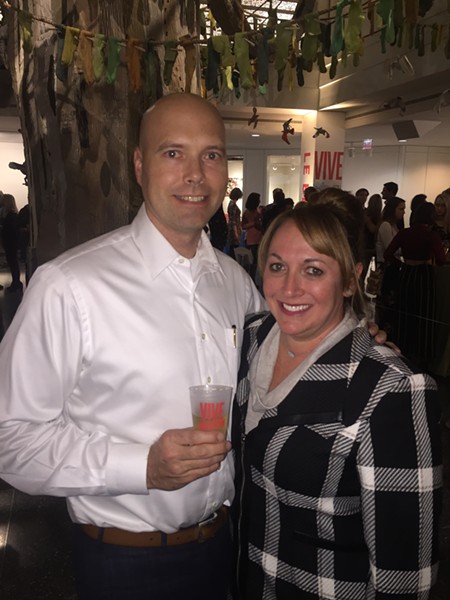 Under the “shade” of Federico Uribe’s towering tree sculpture with its multitude of dangling socks on clotheslines in the Memphis Brooks Museum of Art rotunda, guests dined on cuisine prepared by chefs from Andy Ticer and Michael Hudman restaurants, sipped wine, and listened to David Thompson talk about the agenda for “Vive le Brooks!” at the Vive le Brooks! Launch Party. Thompson and his wife, Sara, and Emily and Bradley Rice are the 2019 Vive le Brooks! chairs.

About 200 people attended the launch party, which was held January 31st. The series of parties with new names is the rebranded Memphis Wine + Food series for 2019 for Brooks.


The series will include several events, which will be held at the Brooks: Meet the Winemaker on March 23rd, Vive le Smash March 24th, the Grand Artisan’s Dinner May 17th, and The Grand Auction on May 18th, all at Brooks.


VIve le Brooks! is the premier fund-raising endeavor of the Brooks. Proceeds will make the arts accessible to children and adults across the Mid-South. The series contributed more than $5 million in net revenue to the Brooks over the past 27 years. The money directly supports the museum’s educational and community-outreach programs. 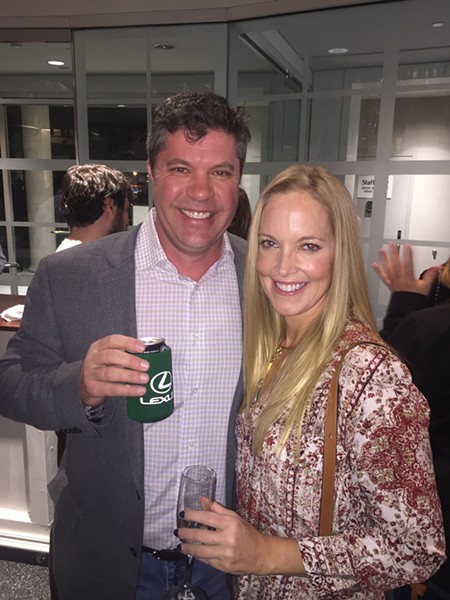 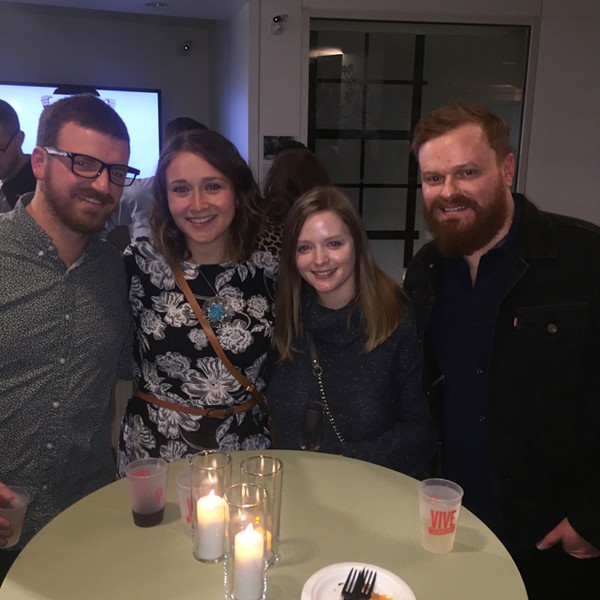 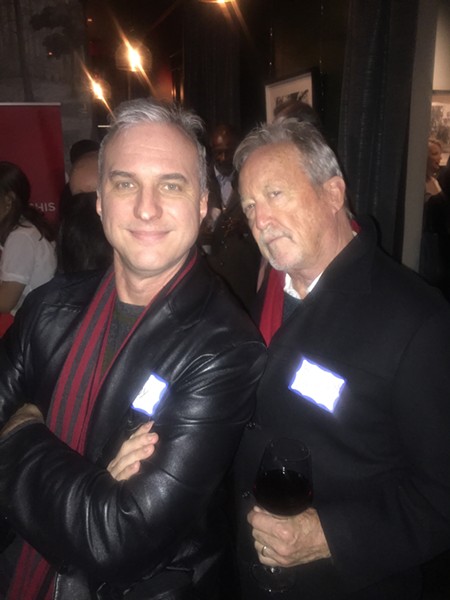 Twenty-one honorees were included in this year’s “20 Under 30” Memphis Flyer issue.

This year’s “class of 2019” were the guests of honor at a reception, which was held January 23rd at Restaurant Iris.


About 150 people packed the house at the event, which was co-hosted by the New Memphis Institute and Northwest Mutual.


Flyer readers were asked to nominate exceptional Memphians under the age of 30.


Most popular photo spot at the party? Beside the blow-up of the January 24th Memphis Flyer cover, which pictures all the honorees. 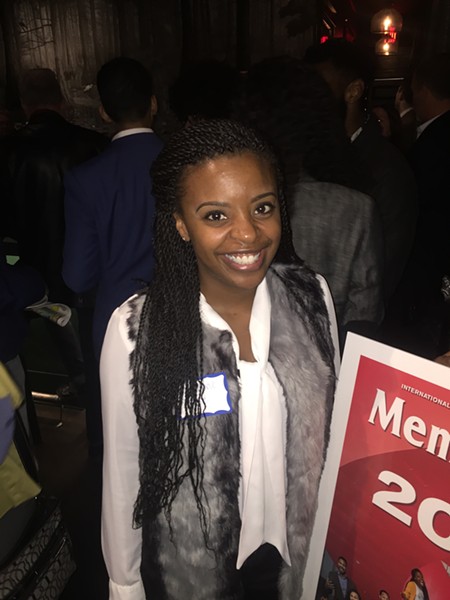 When you’re at the Incognito art show, The person in costume standing next to you might be the artist who painted the picture you’re bidding on.

The premise is simple. Artists exhibit their works but they don’t put their names on the piece. Someone bids on the artwork because they like the work, not because of who executed it. “Our theme has been — since nothing is signed on the front — ‘Bid for what you love, not who you know,’” says Phyllis Boger, former president of Artists Link, which puts on the show.


This year’s event, which is sponsored by Artists Link and Memphis Botanic Garden, was held January 25th.


They encouraged the artists to dress up when the show began in Memphis years ago, Boger says. “Thinking it would be fun for the artists to come incognito. Some go way out there. Just go crazy. And do a great job.”


Some, she says, just “wear a mask and come a little incognito.”


And then, she says, “Some people don’t like dressing up.”

Boger started the show when she was president of Artists Link. Originally, the art was just by members. Today, other artists participate. In past years, Jerry “The King” Lawler was one of the contributing artists.


Incognito now features the “quick bid.” People can come in and “buy something off the bat for $250. They don’t have to go through the bidding process.”


WKNO’s Kacky Walton has been the emcee for the past three years.

Jesse J. Holland, author of "Black Panther: Who is the Black Panther?," was the Star of Hope honoree at the Crystal Ball, the annual event presented by the Community Foundation of Northeast Mississippi. The event was held January 19th at the Southaven Arena.

Holland is a native of Hudsonville, Mississippi, in Marshall County. His book was based on the comic book superhero, who also was portrayed in the 2018 movie, Black Panther.

Obviously, "superhero" was the theme of the event, which was chaired by Emily and Patrick Johnson.

About 500 people turned out for the opening reception of the “Enough: Me Too Exhibit,” which was held January 25th at Memphis College of Art.


Tawny Skye curated the show and also was one of the 25 artists who exhibited work. She is owner of Femme Pots, where pottery is sold to raise money for the Rape, Abuse & Incest National Network (RAINN).


“This is the second one I’ve done in the last year,” Skye says. “I’ve been making my art work about rape culture about four years. [It’s] basically a culture that facilitates and perpetuates the idea that rape is okay.


“For instance, I did a series — my ‘Weapons’ series — to talk about how women are being used as weapons of war. Way back, when armies would infiltrate countries, they would rape women and impregnate women so it would taint the culture. By their standards.


“I decided I wanted to make work that would talk about how strong survivors are and how coming together will help us. And finding the beauty in pain.


“I made these vessels that resembled fertility figures to kind of change the definition of women’s role. In these vessels, I fermented in wine clothing I wore when I was raped. So, they became vessels that took on my pain with me.


“From 7 to 11 my family member was molesting me. And when I was 18 I was raped. And I started remembering my childhood.”


One purpose of the “Enough: Me Too Exhibit” was to give other artists a voice, Skye says. “I was really angry and fed up with the art community not separating the art from the artists. There are some artists in the community who have assaulted women and galleries are aware of it and they’re still showing their work. And I think it’s wrong. There are so many artists out there who haven’t done those things who need exposure. As someone curating, I should be someone providing platforms for people who deserve it.


“The purpose is to provide a platform for people who deserve it, but also to help other survivors know they’re not alone in their struggle.”


Women, she says, “are sort of shunted into the ‘uncanny valley’ in terms of what is expected of them physically and emotionally. Like you’re almost expected to not be human.”


Another song, “Paw in the Honey,” also was relevant to the show, Page says. “It expressed the feeling of frustration about being constantly sexualized.”