Parties given by Eugene Phillips are a part of Memphis music history many people don’t know about.


I began attending birthday parties given by Phillips for Rufus Thomas about 30-plus years ago. My birthday is around the same time as Thomas’s, so my birthday was celebrated, too.

They were amazing when I think back. Carla Thomas, Rufus’s daughter, was there and other music notables or relatives of music notables.


Phillips hasn’t stopped giving parties with music guests. In addition to celebrating Rufus’s birthday back in the day, Phillips celebrates his own birthday. I attended his recent birthday party, which was held February 10th at his Germantown home. His long-time friend Anita Ward, whose 1979 recording of "Ring My Bell" was a hit song, was among the guests.


I asked Phillips to tell me the history of his parties.


“Over 40 years ago, Sandy Lewis, who was on the board of St. Jude, took me on a tour of the hospital and I was so impressed,” Phillips says. “And, I remember, on my birthday people were always giving me a lot of gifts. Things I didn’t need.”


He told Ward, who was his next door, “I was thinking. I’ve got a birthday coming up. I’m going to ask them to take that money and donate to St. Jude. And they started doing it.”


The birthday parties for Rufus also began about 40 years ago, Phillips says. “I gave Rufus a birthday party. And Rufus told me, ‘I don’t care what’s going on on my birthday, what other people plan, I want my birthday dinner at your house.’ This is what he told me years ago. That’s why every year I always held Rufus’s annual birthday dinner. ‘Cause Rufus always enjoyed being in my home and with friends. People he felt comfortable around.”


Rufus had “two birthdays,” Phillips says. “The way that happened was he always celebrated on the 26th, and found out in later years his birthday was on the 27th.”


I remember the lavish spreads at Rufus’ birthday parties at Phillips' home. “Baked turkey and dressing and candied yams. Rufus liked real food. We had a variety of salads and vegetables and wine. We just had everything.”


Rooms in Phillips’s home are named after his friends. He’s got the Rufus Thomas music room, the Bobby “Blue” Bland room, the George Nichopoulos room, the Pat Vanderschaaf room, and hallways named after Ward and attorney Jocalyn Wurzburg, and rooms named after Kelly and Dr, Greg Hanissian, Vera and N. J. Ford, and the children of the Church of God in Christ founder, the late Bishop C. H. Mason.

I asked him to save the garage for me.


Photos of his friends line the walls upstairs and downstairs in Phillips’s home.

“It is so nice to have memories,” Phillips says. 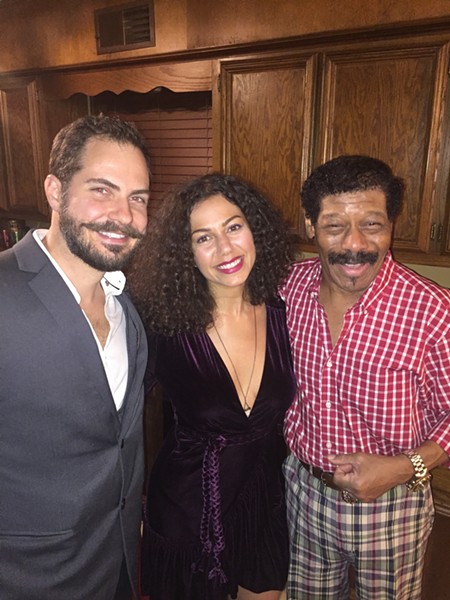 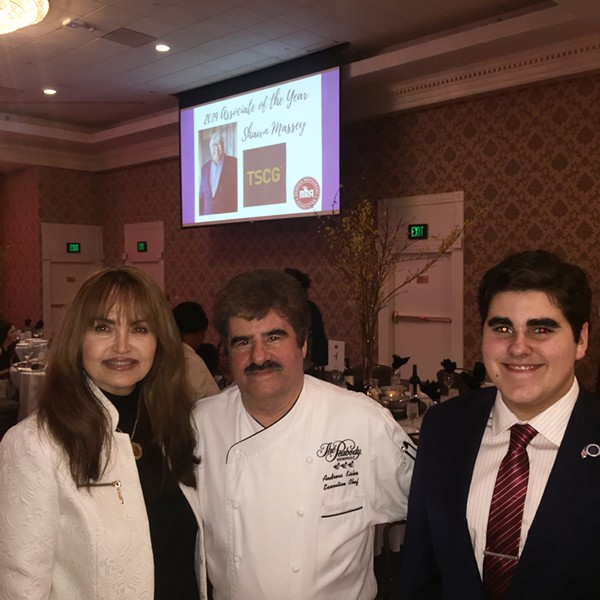 Chefs Andreas Kisler and Patrick Reilly, and non-chef (at least professionally) Shawn Massey brought home the bacon this year at the Memphis Restaurant Association’s 55th annual banquet, which was held February 24th at The Peabody.

Kisler, executive chef at The Peabody, was named Chef of the Year. Reilly, who, along with his wife, Deni, own The Majestic Grille, is Restaurateur of the Year. And Massey, a partner in the Memphis Office of The Shopping Center Group (TSCG), was named Associate Member of the Year. 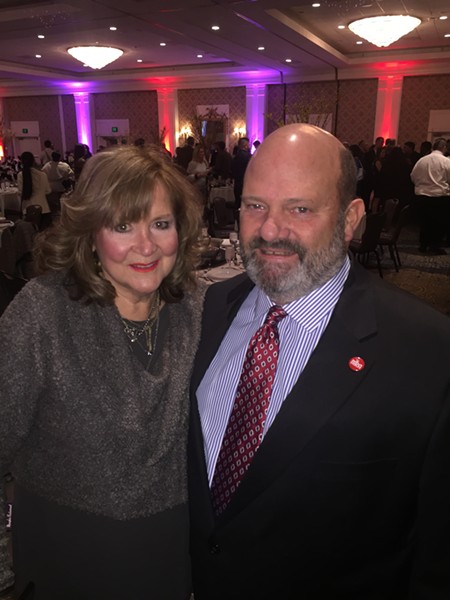 
More than 350 attended the event, which was held February 22nd in the Domino Event Center at St. Jude Children’s Research Hospital. 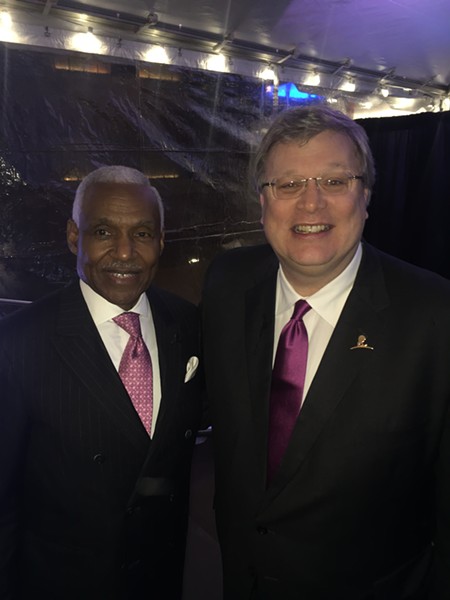 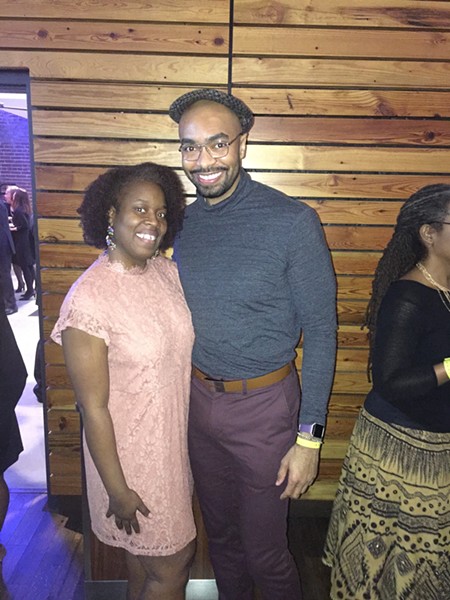 It’s not every fundraiser where most of the audience sticks around for a live auction that ends around 10:30. But that’s what a lot of people at the Madonna Learning Center Annual Gala and Auction did.


More than 900 people attended the event, “A Night of Reel Fun,” says the center’s development director Carrie Roberts. The party was held February 23rd at the Hilton Memphis.


The live auction raised more than $72,000. And, Roberts says, Light Up the House, where “people donate money to help support us” during the event, raised an additional $40,000.


“We’re very happy with our numbers this year,” she says.


As for this year being a record, Roberts doesn’t yet know. But, she says, “We’re neck-and-neck with last year, which was a record.”

Guests were asked to dress in snow skiing attire for the third annual Memphis Garden Gala, which was held February 23rd at Teton Trek at the Memphis Zoo. “Apres Ski” was the theme.


But that day was one of those crazy February Memphis days when the weather was in the 70s.


That night, the weather still was balmy, but most people — even those bundled up — didn’t seem to mind.


The event, which drew 200 people, was a fund-raiser for Big Green, a nonprofit founded by Kimbal Musk and Hugo Matheson dedicated to building a healthier future for children through a nationwide network of Learning Gardens and food literacy programs.


The first Big Green Memphis Learning Garden, where students are exposed to life cycles of fruits and vegetables, was built in 2015. Now, 122 more have been built and another six more are slated to be built by July, 2019. 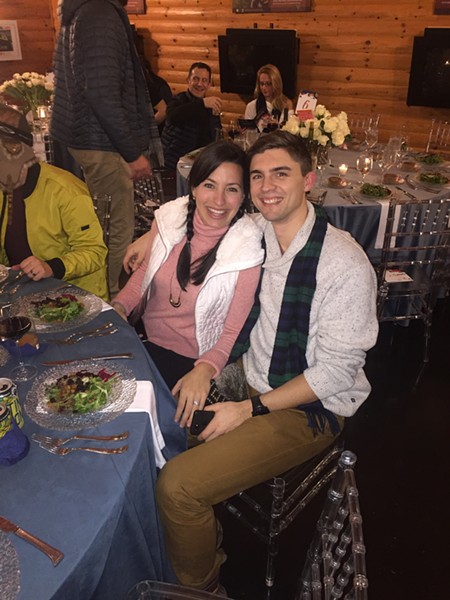