Guests who wanted to get in the act at Tennessee Shakespeare Company’s 10th annual Broadway Gala, got on stage with company actor Nic Picou and read lines with him.

Picou, who was dressed in Shakespearean attire, was part of the event’s Elizabethan Midway of games and fun.


More than 300 people attended the gala, which was held March 30th at the Hilton Memphis. Dinner, open bars, live and silent auctions, and a performance by Alton Fitzgerald White, who played the record-setting “Mufasa” in The Lion King, were featured.

The gala raised $120,000, which, says Dan McCleary, Tennessee Shakespeare Company founder/producing artistic director, “met our goal to increase the number of our trained Memphis teachers to reach 10 percent more Shelby County students, adjudicated youth, and our military veterans next season with our Shakespeare Education and Outreach Program. We currently achieve 35,000 points of contact a year.”


The gala was sponsored by Tennessee Shakespeare Company’s board of directors, which is led by president C. Cato Ealy. 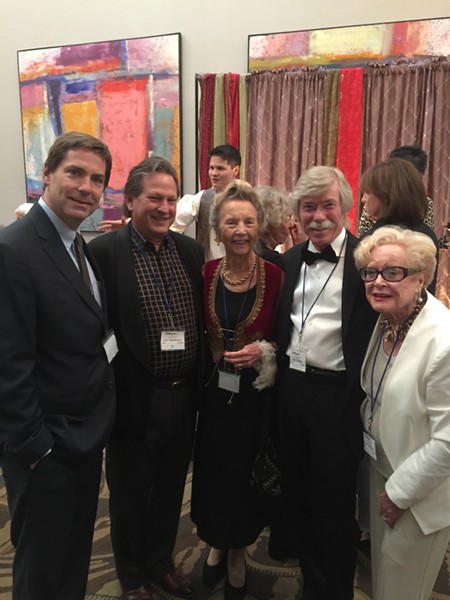 More than 600 people attended this year’s Black Art Experience, which was held March 23rd at the Agricenter International.


That’s quite a few more than the number of people who attended the first Black Art Experience event in 2016. About 100 attended that year, says event founder Jennifer Peete.


They only had six artists at the first one, she says. This year, including Peete, they featured 19 artists and 23 vendors.


Peete, who was born in Louisville, describes herself as “a Memphian by choice.”


She’s only been painting a few years. “I started in the summer of 2015 after I broke my ankle. I was trying to find something to do and I started painting. I’ve been drawing all my life. I was like, ‘I wonder if I can paint?’ I started and I turned it into a business.”


Peete primarily paints black women and girls. “I try to paint a different narrative of black women in a positive light. For example, I show black women with their natural hair. Sometimes I do darker skin tones to let them know you don’t have to be a certain skin shade to be beautiful. Everyone is beautiful.”


She plans to broaden her subject matter. “I want to start doing boys and men, but I haven’t entered that realm yet.”


Kendra Burchett, one of the artists in Black Art Experience, did some of her painting during the show. But she used people as her canvas.


“A few of them were friends, but they’re all fitness trainers, so they all kind of know each other one way or another,” Burchett says.


She only painted the arms of the men and women at the Agricenter show. “Usually, I paint them topless - my male models. I cover the female model in the back and I do designs in the front.”


Burchett paints almost the complete body. “I do everything except the private areas. That’s the only thing I don’t do.”


As for the paint, she says, “I mix my own paint. It’s acrylic based, but I mix my own colors.”


She doesn’t just paint people. “I do canvas, murals. I just built a vanity for my wife for her birthday.” 
“Love” is a tennis term, but it also applied to how guests at “A Serving for Tennis” felt about the party, which was held March 23rd at the Red Barn at Agricenter International.


“It was the most successful event they’ve had in the six years it’s been in existence,” says Murray Lace, accounts executive for Obsidian Public Relations, which handled the event.


And, she says, “Sponsorship donations were more than ever before.”


A Serving for Tennis is the largest fund-raiser each year for Tennis Memphis, a nonprofit that provides sport, mentorship, and education to young people. 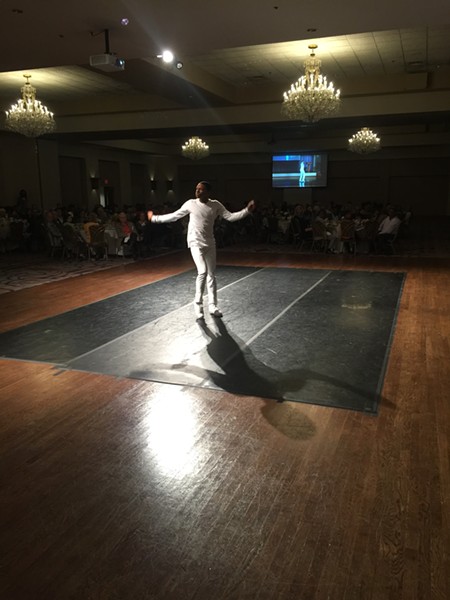 Guests got acquainted with New Ballet Ensemble & School at the school’s “Building Brighter Futures luncheon, which was held March 29th at the Holiday Inn at the University of Memphis.


“Elevating Unity” was this year’s theme.

There was dancing: “African Dancing and Drumming” and “La Derniere Danse,” which featured New Ballet student dancers, and  “The Swan,” which was performed by New Ballet dancer Jeremy Bowers.


There was a student testimonial, which was given by Asya Miles.


And a video: ‘Building Brighter Futures.”


About 360 attended the event, which raised more than $190,000 in gifts and pledges, says Julie Goebl, New Ballet director of administration and philanthropy.


Asked the importance of the luncheon, New Ballet founding CEO/artistic director Katie Smythe says, “It increases our capacity for all that we do. And, for us, the most important capacity is teaching in public schools and the professional development of our teaching artists. It makes us less reliant on grants and balances our contributions income so if one grant goes away that program doesn’t have to end. If we’re balancing grants with individual donations we know, in the instance a grant doesn’t work out or one goes away as they will from time to time, the contributions from individuals help us sustain those programs.”


Among the guests was New Ballet alumnus Charles “Lil Buck” Riley. He and his manager, Jai Armmer, are opening the Memphis Jookin’ Academy at the Cossitt Library. Armmer will be executive director of the academy. “I’m not sure it will be a daily program, but it will be an ongoing program,” Smythe says.

The goal of the school will be “to train dancers in the art of jookin, which is original to Memphis.” 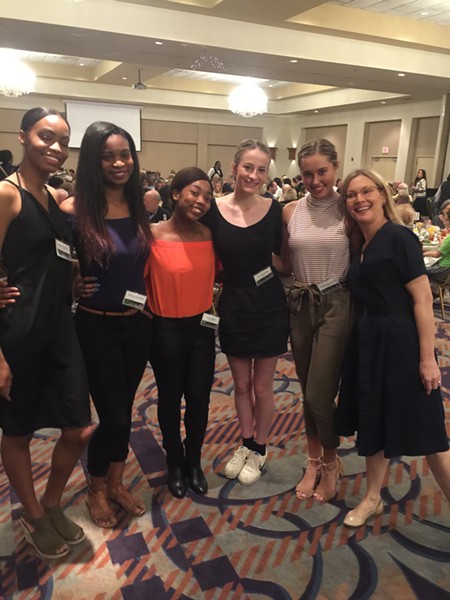 Launch Pad held its launch party - so to speak - on March 21st.


Launch Pad, which is on the third floor of Toyota Plaza next to AutoZone Park, consists of 37 private offices. “A lot of these people who come through our doors don’t have offices and they’re tired of working out of Starbucks. They’re tired of having professional clients at Starbucks or the library.”


Launch Pad held a soft opening on October 1st, but they wanted their grand opening later, when they could showcase people already working in the space. They now have between 22 and 24 offices booked, Shelton says. 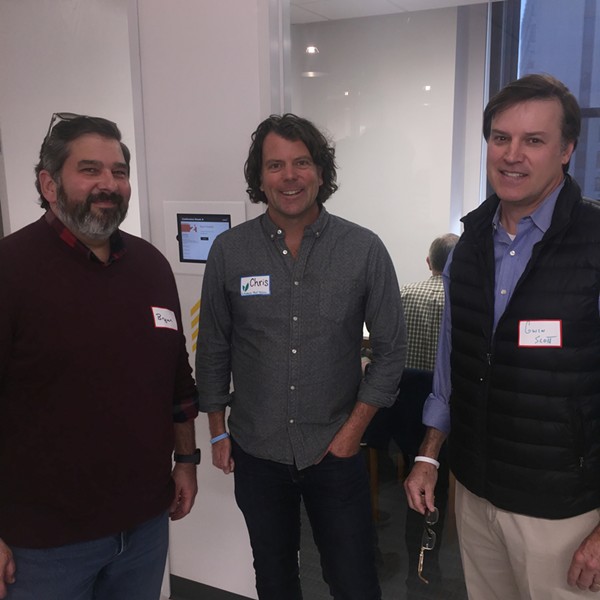 
The Memphis Flyer’s second annual Whiskey Warmer was a sell-out with more than 800 people. The event was held March 22nd in Overton Square.


The event, presented by Orion FCU and Crown Royal, featured whiskeys from more than 40 distillers, luxury autos from Mercedes Benz of Memphis, cigars from BeLeaf, and food from Second Line, Cousin’s Maine Lobster, and Laura’s Kitchen. 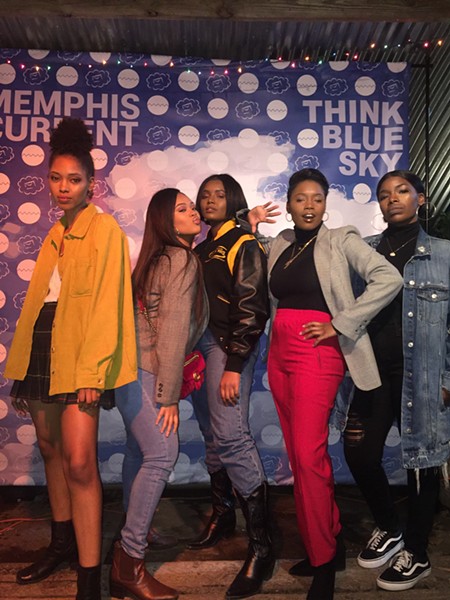