If you think you recently saw Alexis Grace around town, you’re right. The Memphis singer, actor, and “American Idol” finalist who moved to Los Angeles with her husband, Thomas Bergstig, in 2017 is back in Memphis. For a while.


“We’re here temporarily,” says Grace. “We came back because of family circumstances.”

Her daughter, Ryan Zabielski, 12, was injured in a car accident. “We did a Go Fund Me (and raised) $15,000 in four days for us to move back so quickly so she could go to rehab.”


Zabielski is “fully recovered from her accident,” says Grace, who says she and Bergstig plan to be in Memphis “right now until December.”


A native Memphian, Grace was a finalist who came in 11th place on season eight of TV’s “American Idol.” For eight years, she was a Memphis deejay on Q-107 FM.


Bergstig, who is from Sweden, is the former music director at Playhouse on the Square. He and Isaac Middleton are the tap-dancing-musical-instrument-playing performers in Swedish Jam Factory.


Grace is working with film productions in Memphis. She played Kellie Pickler’s stand-in in the Hallmark Films production of Christmas at Graceland and she played the part of Pickler’s wedding cake baker in Hallmark’s Wedding at Graceland. “Here’s the funny thing: Kellie is also from ‘American Idol.’ So, we have a lot of similarities in our career and stuff.”


Grace is excited about the film and TV opportunities in Memphis, including the Bluff City Law series, which is filming in Memphis.


She’d love to be a part of that series. “I know a lot of people in town are happy that happened because now they have work. I think it’s really important the city knows about these productions providing work for artists and people who work in the industry right now.

"Take me, for example. I moved out to Los Angeles because I needed to find more work as an artist, as an actor, as a singer. It’s very hard to find work here in the city that sustains a whole family. It really is. Unionized type of work.


“So, the fact that a lot of people who work in the film industry in town travel to work in other cities when they want to be a part of big productions to make money and things, the fact the series and Hallmark are coming here I know so many people who are like, ‘Thank you.’ It’s a really big deal.”


Grace loves living in Los Angeles. “It took about a year. I hated the first year. Well, I miss my family. I’m a big family person and it was weird to not be able to run to my mom’s house if I want to see her. And family get-togethers.”


It’s more expensive to live in L.A., but, she says, “The opportunities that are there are endless in any line of work ‘cause it’s such a big city. But especially entertainment. If you work hard and you’re talented and creative and you’ve got a go-getter personality and you put yourself out there, it will work itself out. It just takes time.”


Grace did a lot of background singing for TV shows in L.A. “And that was thanks to ‘American Idol.’ Because I was a contestant on that show I made a lot of contacts with musicians and vocalists and arrangers. When I moved to L.A. I let them know I was in town. I did a gig with Katy Perry at the Hollywood Bowl, just singing background.”

Will Grace and Bergstig stay in Memphis? “You can act and perform anywhere, but if you want to do that for a living, it’s very helpful to live in a place where you can make a living by doing that. Plus, the weather is amazing.You do miss thunderstorms every now and then.”


But will they remain in LA? “Seriously, I feel like at my age and the career that I chose it’s still a little hard to say I’m going to stay in one place forever,” Grace says. “You never know where you’re going to. You never know what your next phone call is going to be.”

FreeSol is back in Memphis. He has been living in California since 2012.


He’s lead singer of the alternative soul band also known as FreeSol, which formed in 2003.


“Soon as we got dropped from this record deal — Interscope and Tennman Records, Justin Timberlake’s label — I bounced to Cali,” says Free. “‘Cause I always wanted to be in Cali. You know me and Cali have something special. I really wanted to be out there. I went out there to re-find myself.”


He was “let down by the whole record deal.”


“We received a call on a Monday that we were No. 1 priority of Interscope. By that Friday

were dropped. Just some political stuff.”


And, he says, “FreeSol wasn’t a free soul. I had to escape out West. I felt trapped”

In California, FreeSol says he’s been “learning how to breathe. Meditate. Calm down and not chase things so much. It’s like a ‘finding myself-type situation' right now. I felt like I learned more about what I am. And who I am.”


Now, he’s “chasing a lifestyle and philosophy rather than finance, riches, and fame.”

He’s been able to “live in the moment with happiness.”


FreeSol learned about the marijuana industry while in California. “I just recently got a company called Sweet Cali. A partner and I took it over. It’s been a business since 2014. We’re slowly building that up.”


Sweet Cali is “an edible line. We’re focusing on turning it into more of a lifestyle brand from clothes to CBDs, anything related to marijuana.”


FreeSol never stopped performing, but he says, “I feel like I want to make music again. I want to to do it here. There’s an energy pulling me back home. A lot of love for me. I feel something coming in this direction.”


And, he says, “I’m happy to see so much excitement. So many people doing cool things. So many artists being supportive. I want to be a part of it.”


If you were at the Hear 901 festival back in April at The Bluff, you probably noticed Smith, 25, who moved from instrument to instrument on stage. He backed Bailey Bigger on her set at the show, which featured University of Memphis music students.


“I was playing electric guitar on a couple of songs,” says Smith. “I switched over to lap steel. It was funny. When we made the set list I was thinking of all the changes I had to do, flip flop every single song. It was fun, man. Her songs are great. Her songs are super cool. She’s really talented.”


Smith isn’t a U of M student; he’s a 2015 graduate of Visible Music College.


“I haven’t really been playing lap steel that long. I got a lap steel for my birthday back in November. I locked myself in my room and tried to learn songs and basic chords I could play with my friends. I played a show around Christmas time with Ben Callicott. Old News. With Kyle and Harrison Neblett. All of those guys are so good.”


Smith, who is from Kansas, began playing guitar when he was 10. “It was because of the iconic scene in Back to the Future when Michael J. Fox grabs that red Gibson 355 and just rips out ‘Johnny B. Goode.’”


He knew it had to be guitar for his first musical instrument. “I knew guitar was way cooler than piano or whatever. I was a little kid. You think like that. I wanted to be [Marty McFly]

in 'Back to the Future’ and play guitar.’”

Why the Nashville move? “No kids. No mortgage or anything like that. We just wanted to have a little bit of adventure.”


He plans to make trips back to Memphis. “We both have family back in Memphis and definitely will be coming back and forth. I actually still am part of the band I play with called ‘Junior Year.’ Josh Maze, worship pastor at Highpoint, is the front man. We’ll continue to do shows in Memphis as they come up.”


It was “bittersweet to leave Memphis.” But, Smith says, “I’m definitely not going to be a stranger to the 901.”


Fans showed Sushi Jimmi some love, and loved them some sushi at the grand re-opening at the restaurant at 2895 Poplar.


Gustavo Gomez, 20, didn’t know it was the grand re-opening. He didn’t know the restaurant was, again, open for business.


“I just got off work,” says Gomez, who delivers pizzas for Little Italy restaurant. “I was passing by going home and I saw people there. I knew it was closed. Man, so sad. Then I see lights and I see people there. I was like, ‘Oh, why don’t I just stop here and see what happened?’ ‘Cause I used to go there a lot.”


He went twice a month before the restaurant closed May 23rd, Gomez says. The rolls are big and the prices are reasonable, he says.


And, Gomez says, “It’s just a cool place to hang out with friends and stuff.”


The Big Boy is Gomez’s go-to sushi roll. “It’s crab and some type of fish and it has this spicey sauce. It’s one of the big ones. I’ve tried other ones, but I always go with that.”


Jimmy Sinh, former owner now head chef, planned to close the restaurant and move to Florida, but his family didn’t want to let the place go. And Sinh already put a lot of money in the restaurant.


Jimmy and his brother, David Sinh, the new owner, and the staff toasted with champagne. Everyone gathered at the front of the restaurant for the bubbly and good wishes. 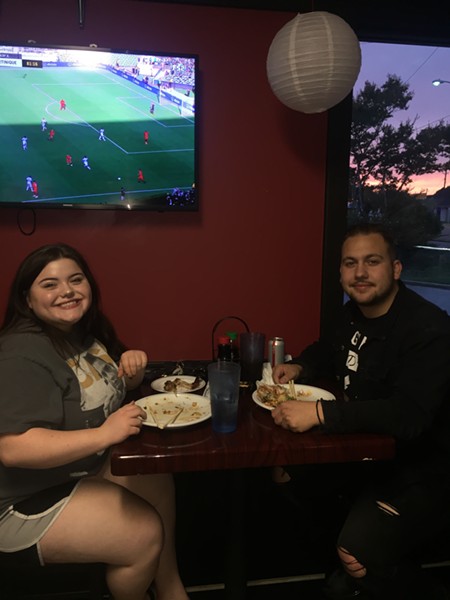