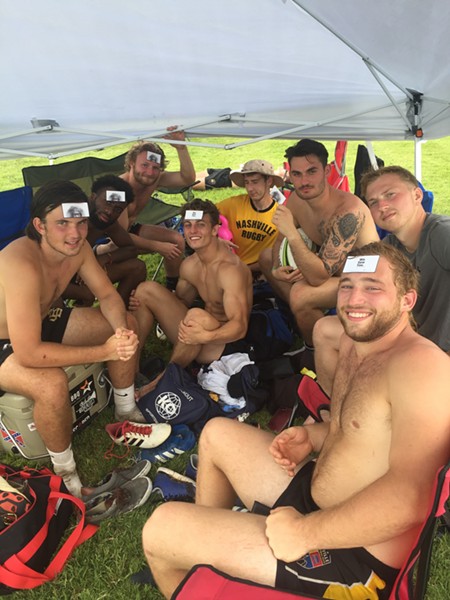 Instead of giving him the shirt - or the cape - off his back, Larry Magdovitz, dressed as The King, gave the patent leather belt that accessorized his white jumpsuit to John Elmore. That was after Elmore won first prize in the Mr. Sideburns contest at the Elvis 7s rugby tournament.

The rugby event, which has been called the unofficial start of Elvis Week, is when ruggers grow sideburns just for the tournament. They play rugby against a background of Elvis songs. This year’s tournament was held August 3rd at USA Stadium in Millington.


Players taking part in the Mr. Sideburns contest competed for the best sideburns and sang an Elvis song of their choice.

Elmore, a member of Memphis Blues Rugby Club, was the first place winner with his  burns and his rendition of “Stuck on You.” 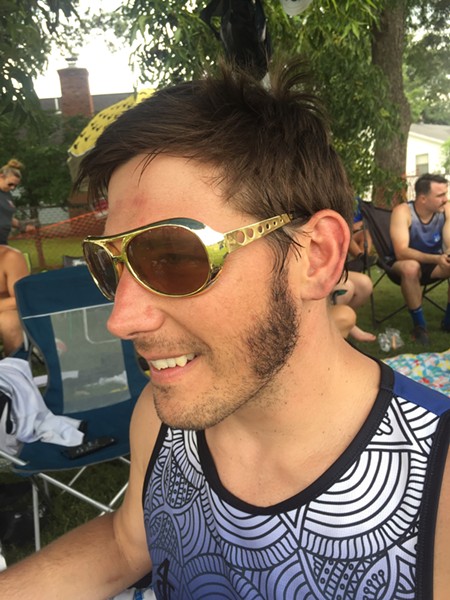 Jay Etkin Gallery at 942 South Cooper was packed for the August 7th opening of Cole O’Keeffe’s exhibition of works, which he titled “God is Real and Other Perceptions.”


About 120 people attended the event, where Cole also did a reading of some of his writings.


Jay says he told the audience, “What you have here in front of you is a youthful visionary.”


“What he’s doing,” Jay says, “is coming to the public - in this case - without any pretension, without any agenda. The work is raw - in a good way. It’s not fussy. It’s just what he’s in the moment of, whether written word or making a painting. There is no forethought of ‘I have to make this one way or the other.’ It’s just spontaneous and intuitive. But his value is the rawness of it.


“This is not commercial fine art. This is very raw fine art. And I’m saying this as a compliment because I’ve seen too many people who think about the market when they’re making art.”


Cole, Etkin says, puts his heart on his sleeve, which he also demonstrated in his readings. Cole “read very intimate things in front of all these people that night.”

"God is Real and Other Perceptions" is on view through August 10th.


“I did not know it was going to come,” Brooks says. “I was surprised. I was ecstatic. I was very grateful.”


He wanted the exposure for the film. “It’s such a powerful story. And collaborating with Abby Meyers was such a beautiful thing.”


A Night Out, which stars Rosalyn R. Ross, is about a woman who goes to a nightclub to cheer herself up after a bad breakup. All the action takes place in one continuous 10-minute shot in and around Mollie Fontaine Lounge.


What’s next? “I have a feature film I’m hoping to get funding for next year. That’s my goal.

I really want to do a big film. My goal since I was six years old. Now is the time to take advantage of the resources I have in my life and the people who supported me to make this happen.”


What’s he going to do with his share of the prize money?  “Put it towards the feature, hopefully.”


And, Brooks says with a laugh, “Try not to party too hard.”

The inaugural Summer Cocktail Festival, which was held August 2nd in Overton Square, was a success.


The event, hosted by the Memphis Flyer and Captain Morgan, was an advance sellout with 750 guests.


More than 30 spirit brands were featured along with a wide variety of custom cocktails.


The danceable music was provided by DJ Jordan Rogers.


“Rooms and Relics” was the theme of Hotel Indigo’s grand opening celebration, which was held August 1st. Visitors toured the hotel and its 3rd & Court diner. About 125 people, including Mayor Jim Strickland and other dignitaries, attended.

Guests dined on hors d’oeuvres from chef Ryan Trimm and listened to the music of the Stax Academy Ensemble.


Guests also took part in a “scavenger hunt;” they were asked to answer questions, including:

1. Jukebox: Name the musician on record /CD 07 on the jukebox.

2. Lobby: What year was the blue cement wall built, and what was it originally a wall for?

3. Which photographer is featured near the front desk, and what is significant about this photo gallery?

6. What is the name of the meeting space at Hotel Indigo?

7. Which nonprofit will receive funds from this room's reservation?

Here are the answers:

6. "Court Room" because it faces Court Avenue and the hotel is near law offices.

7. Stax. Room No. 813 is dedicated to Stax and is decorated in Stax decor and posters. If someone stays in this room, the hotel will give Stax 10 percent of the revenue. A check will be presented at the end of each year.