All you see of dancer Brandon Ramey in his Stay Inside video, are his feet. But he’s not wearing ballet slippers; he’s wearing a pair of Saucony sneakers.


His wife, Virginia Pilgrim Ramey, does the dancing. The Rameys are veteran members of Ballet Memphis.

Describing the video, Brandon says, “It’s just an idea of what happens to a dancer when they’re stuck in quarantine. Everyone else gets to telecommute, work from home, do their jobs. But, obviously, a ballet dancer — that’s not an option.”


They don’t have an enormous home studio, where they can practice their dancing. The question, Brandon says, is “What happens to a ballet dancer when you’re stuck in rooms that are 12 feet by 12 feet?”


Which is exactly what he and Virginia and their 20-month-old daughter, Louellen, currently are doing.


They’ve been stuck at home since Ballet Memphis closed because of COVID-19 precautions. “Our last day of work was March 16th.”


Brandon didn’t waste any time making the short dance video, which he posted on Facebook and Instagram. “Our last day was on a Monday, and I started it on Tuesday, March 17th.”


He made the video “just out of frustration of the fact that the rest of our season was cancelled and Cinderella wasn’t going to happen.” 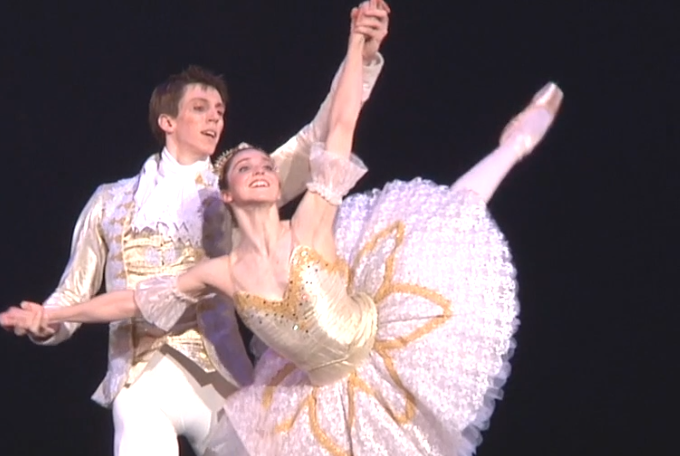 “The last day of work we weren’t preparing for the show. We were recording everything, to bring it back maybe next season. We were all feeling glum about not going to perform.”

Brandon wanted to figure out a way to make their art form “relevant and helpful in this current situation.”


The video lasts two minutes. “It starts with me walking down the street. You see my sneakers on the sidewalk. I’m walking by our house. It’s a dark night. Everyone is inside, but the lights are on. I walk up to the house just to see what’s going on and — boom! — Ginny appears and starts doing a dance about, basically, being locked in for the foreseeable future.”


He shot the video through the large glass window set in their front door. “It frames the shot perfectly. It emphasizes there’s this separation of the inside world without obstructing the view of the dance choreography.”


Virginia dances to the song “Stay Inside” by Raleigh Ritchie. “It really sinks up well to the times and the idea of being in quarantine.”


The video begins with Virginia dancing in clothes she would wear to go out someplace. It ends with her in pajamas. “The choreography is mine. I did the editing, but she’s my muse.”


Describing her outfits, Virginia says, “Basically the equivalent of skinny jeans and a nice blouse and a jacket and sneakers. Not like a fancy outfit. Still something I could move in. Obviously, I’m dancing in it. Kind of stretchy pants. We wanted it to have the look of ‘I’ve been out in public.’ But by the end of the video I’m just in a big, fuzzy, pink robe and a shower cap with a look of having been in the house or planning to be in the house for a good, long time. Kind of resigned to not caring at all.”


She and Brandon viewed the video as humorous, Virginia says, “But responses we’ve gotten from people are, ‘Oh, it’s so sad.’ People are feeling the depth of it. Everyone is like, ‘That’s exactly how I feel.’ It’s reaching people in a deeper way than I think we originally expected it to. Dance can always touch the heart of a subject quicker than words can. That’s my opinion being a dancer. I think Brandon really captured the way people were feeling in a way neither of us expected in two minutes.”


As for real life, the Rameys have created their own dance “studio” in their home.

“We have kind of moved some furniture around in our front room,” Virginia says. “We have a little area rug. We pulled that up. And so now we have just the hardwood. And we had a daybed in that room. So, we flipped it around so the headboard could be like a ballet barre. We’re really working with a makeshift studio.”

But, she says, “With the two of us side by side we kick each other or the window. Not to mention we have a toddler running around at our feet. Which we don’t normally have at our feet.”


The Rameys continue to be disciplined about their dancing. “Every morning at 9 we just do what we’d do if we’re going to work,” Brandon says. “Go in our little dance studio and give us a class up until we run out of room. We don’t know how long this quarantine is going to stretch on, but we want to come out of it keeping our instruments in the condition we need them to be for our professional dancing careers.”


Brandon also is filming ballet classes “and putting them on the internet so ballet students can stay in touch with us.”