By this time, I’d have sampled barbecue from a few teams, partied until after midnight at the Cadillac Grillz booth, and taken zillions of Instagram photos of revelers at the Memphis in May World Championship Barbecue Cooking Contest.

The contest, which would have taken place in mid-May, has been postponed. Now all we have are memories. But #BBQfestONLINE on Facebook is helping to keep those memories alive.

Ryan Joseph Hopgood from the Memphis Sandwich Clique Facebook group came up with the idea. “We just started looking at some barbecue posts,” he says. “On my Facebook, going through old Barbecue Fest and Music Fest memories, in my mind I was like, ‘How do we keep the spirit alive?’ And I just came up with #BBQfestONLINE.”

It’s not a Facebook group; people just follow a hashtag, Hopgood says. “No one has to be a part of any group to see the pictures. You don’t have to be part of a team to see the photos, to keep track of the barbecue. All you have to do is search in the search bar ‘bbqfestonline.’”

People post photos of succulent barbecue. “#BBQfestONLINE does take away from the fact that you don’t get to taste the barbecue, but we get the esthetics and the energy behind the barbecue because the teams are still able to promote their barbecue and keep their skills sharp on their backyard smokers until barbecue fest comes back."

The photos aren’t limited to meat, Hopgood says. “My favorite posts have been posts and videos from the tents last year and previous years from the teams. Someone was posting a video they had of DJs and all this stuff. They’re able to post their videos of their crowds in their tent. The thing about Barbecue Fest is it isn’t just about the barbecue, it’s about the party.” 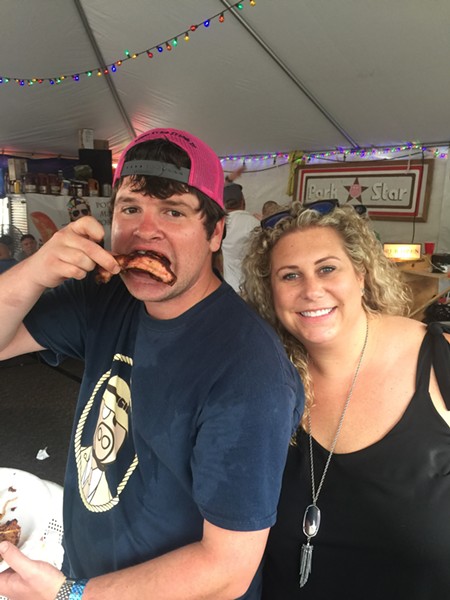 Hopgood’s favorite part of the annual festival is “getting wrist bands and trying different tents and seeing different styles of barbecue from different parts of the country.”

#BBQfestONLINE brings together the pages of individual barbecue teams that feature their barbecue. “So we can judge it on esthetics, how it looks, since we’re not able to taste it. Leave our mouths watering for barbecue.

“Anybody can be a spectator and witness some beautiful Memphis barbecue. And get to try it next year. This is just subliminal messaging for Barbecue Fest.”

Tim Bednarski, owner of Elwood’s Shack, is a #BBQfestONLINE contributor. A member of the Pigs in Space barbecue team, Bednarski would be out on the river cooking if it wasn’t for the pandemic. “This week is barbecue week,” he says. “Everybody is geared up for it.”

Instead, he can enjoy and participate with #BBQfestONLINE. “It’s cute and fun to see it and be a part of it. And reminisce a little bit. I just posted a picture of our ribs we sell here in our restaurant. I posted some ribs we cooked in our smoker at Memphis in May a couple of years back.”

Another favorite time is “competition morning,” he says. “Definitely, Saturday morning. The excitement and getting geared up for it. And the nervousness of it, too. Making sure everything goes right and trying to avoid catastrophes, which seem to happen every year.”

Another #BBQfestONLINE contributor, champion competitive eater Brett Healey, says the Memphis in May World Championship Barbecue Cooking Contest is “the crowning glory of Memphis in May” for him even though he’s not on a team. “I’m strictly a spectator. I love getting the chance to taste championship barbecue not just from the Memphis area, but all over the world.”

Healey contributed a post of a sandwich he created. “Crockpot-made pulled barbecue chicken, topped with with bread, butter, pickles, red onions, cheddar cheese. And the real wild part was the homemade churro bun. That was dusted with cinnamon sugar and Anjo chili powder. It was a sweet and spicy blend on bread.”

Healey actually will be in a barbecue competition May 16th in Southaven. It’s a “five-pound barbecue nacho platter. That’s the challenge tomorrow. My first public challenge before March before all this went down.”

And he says, “I’m showing up a little bit over-prepared. You can’t be too cautious these days. I’ll be bringing gloves and my face mask to the event. Pretty much keeping it on at all times except when I’m eating.”

Healey plans to “get out there and get back home as soon as possible.”