The Little Tea Shop is closed for now because of the pandemic, but, thanks to Molly Wexler and crew, fans can visit the iconic Downtown restaurant on film.

The Little Tea Shop, Wexler’s documentary on the restaurant owned by Suhair Lauck, will air at 7:30 p.m. July 10th, 3:30 p.m. July 11th, and noon on July 12th on WKNO-TV. “This is the first time anyone will be able to see it,” says Wexler, founder of Last Bite Films. “Technically, this is the premiere. This is the half-hour version. The short version is 16 minutes long. The one we submitted to film festivals.”

As for the patrons in the documentary, Wexler says, viewers will “see a lot of Memphis favorites like Henry Turley and Charlie Newman. And Pat Mitchell Worley, Mayor A C Wharton.” 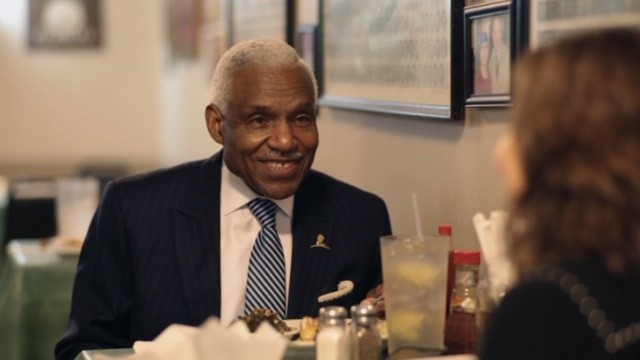 Then there are people like Matt Dellinger, author of Interstate 69, a book about the history of the highway. “He’s a really engaging guy from Brooklyn who we interviewed because we wanted someone who wasn’t from Memphis.”

Dellinger’s story with Lauck is “incredible,” Wexler says. “About 10 years ago he was down in Memphis doing research for a book he was writing and he stumbled into The Little Tea Shop. He wasn’t feeling well. And the way Suhair and some of the other people took care of him, he made life-long bonds with people from here. Because of The Little Tea Shop.”

Asked how the documentary came into being, Wexler says, “I actually got the idea when I saw Suhair out one night and it got me thinking about the Tea Shop and how I went there with my dad when I was a kid. He was a lawyer and working Downtown. I couldn’t believe the restaurant was not just still open, but thriving. I thought, ‘That’s kind of unique. I’m curious to learn more.’”

The Little Tea Shop was founded in 1918 by Lillie E. Parham and Emily A. Carpenter as a place for their friends to eat lunch when they were Downtown. Vernon Bell bought the restaurant in the 1940s. Lauck’s husband, the late James Lauck Sr., bought it in 1982.

Lauck, who was born in Bethany, Palestine, moved to Memphis in 1967 after marrying her first husband, who lived in Memphis. She later married James Lauck, who owned The Little Tea Shop, and began her career at the restaurant.

After she got the idea for the documentary, Wexler began visiting the restaurant, but not telling Lauck what she was up to in case she didn’t pursue the project. “Before I ever was even going to film it, I was doing a bunch of research. Just talking to people who ate at the restaurant to find out if there was enough material there to make the documentary.”

She got together with Newman, John Malmo, and Ken Neill at the restaurant. “Matt was in town. And his relationship with all those people and Suhair was so interesting we arranged to film another day when he was back in town to get him on camera. He adds a lot to the story, I think.”

That “shows how special” The Little Tea Shop is, Wexler says. Someone like Dellinger from Brooklyn “can come in and make these amazing connections. It feels like home here.”

That’s “the root of the story,” she says. “Why is the 102-year-old restaurant so important to so many people as a connector? I think it’s the fact that it feels so comfortable. You feel so welcome.”

And, she says, “You might have a conversation that changes Memphis.”

Wexler is executive producer and co-director of the documentary. Joseph Carr is producer and Matteo Servente is co-director. “Without Joseph and Matteo, the movie wouldn’t have been made because they brought years of expertise and they were very patient with me.”

As for the documentary-making experience, Wexler says, “I learned that I love making films. I hope I get to do this again. And I love getting  to know people and getting their stories. When you give people this platform to share, you learn about the best of people.”

Wexler says she “probably met 50 new friends. We connected through The Little Tea Shop. There are so many neat things about people that are inspirational. There are a lot of exciting and interesting people living in Memphis whom I had the honor to meet.”

After the documentary premieres on WKNO, the station is “going to offer it up for other PBS stations in Tennessee and maybe the region to show it if they want to. Ideally, we’d love to get distribution for it. There are a few networks that could be a good fit.

“If it wasn’t for the pandemic, then WKNO would have had a big watch party and everything, but you can’t do that. What I’m hoping is that since people can’t go to the restaurant and everybody is missing that sense of community and all that great food, maybe this will bring them a little bit of happiness and remind them. It might make them a tad bit sad, but, hopefully, it will also make them happy. It will make them remember the good times there and, in kind, make them want to go back. They’ll feel that sense of missing that restaurant a little bit more.”

For her next project, Wexler says, “Joseph and Matteo are tossing around a few ideas, but the pandemic kind of makes it challenging. It’s a good time to brainstorm. We have one idea we’re excited about, but it’s a little challenging to move forward now.”

The new project, Wexler says, would be “very different, but still Memphis-centric.”