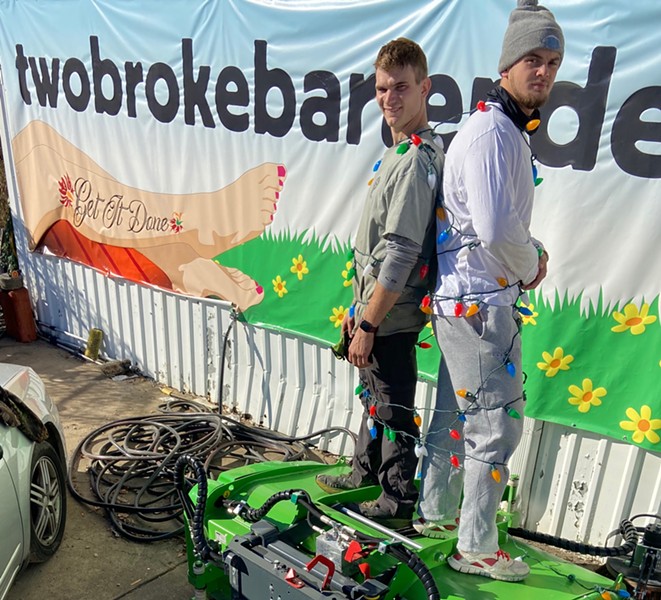 It was in the darkest part of the pandemic when just about all businesses were shut down and people were sheltered in place.

I wrote in part that laid-off bartenders “are now yard tenders. Or handymen and women who do all types of chores around the house. Same goes for out-of-work cooks, servers, and other restaurant men and women.”

It was started by Taylor Berger, who also is an operating partner in the group that owns Railgarten, Loflin Yard, Rec Room, and Bounty on Broad, as a way to help his former employees.

Two Broke Bartenders, which began with a handful of people, now includes two dozen former restaurant workers who decided to remain with the business and not to return to their old jobs.

The company grew to include moving services, junk removal, home repair, outdoor building and full-service landscaping and building as a licensed general contractor.

They now have their own headquarters in County Glass, which is in the old Skateland roller skating rink at 5137 Old Summer.

For the holiday season, Two Broke Bartenders is taking on a Santa’s helper role. They’ve partnered with The Shops of Saddle Creek to gift wrap and deliver merchandise to the doorsteps of the homes of customers who ordered the items.  Customers who just want the gift wrapping service can visit Two Broke Bartenders’ “Holiday Wrap Headquarters” between Talbot’s and Sephora. They can wait or have the gift delivered.

The Holiday Wrap Headquarters will be open daily beginning November 23rd and will run through December 24th. For more information, visit twobrokebartenders.com or text them at (901) 450-5990.