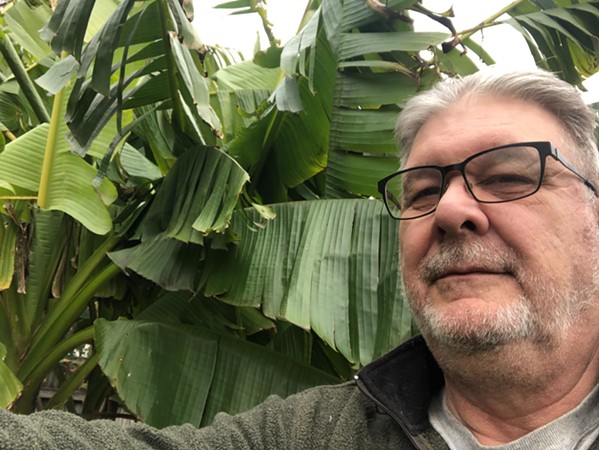 While many people currently have evergreens — the kind with twinkling lights — on their minds, Clark Hooser is in more of a tropical frame of mind.

Before the recent frost, Hooser, 62, had some 70 banana trees growing in his yard off Central between Hollywood and East Parkway. “I went out there and kind of told them goodbye Monday night,” he says. “It got down to 20 or something. They’re still standing, but it hit them pretty hard. I call them my ‘friends.’”

Though he’s been growing them for more than 30 years, Hooser continues to learn more about banana trees. “I’ve just learned that you let them die back and fall on top of each other. That kind of insulates them.”

You don’t have to leave the part that dies back over the plants during the winter. “They do come back, but it takes them longer to get taller.”

Some of his get more than 20-feet-tall, Hooser says. “It goes to the top of my house. I know they’re twice as tall as me. In the summertime, I notice from 1 to 8 I’m covered. No sun hitting my house at that time. It made a big difference in my electricity bill, too."

He got his first plants around 1987, but he doesn’t remember where he got them. “There was a person on the other side of the circle that had a bunch of them. I remember seeing those, and I may have gotten two or three from him.”

Hooser originally planted them on the West side of the house to “help with cooling in the summer time. I think that was my strategy. Then they got so many there, I had to, of course, transplant them.”

He now has four groups of trees in his yard. ”It’s almost like the less you mess with them, the better they do. At least that’s been my experience. Even in your little drought periods, I never had to water them. They’re usually fine. I got out there and check on them and make sure they’re nice and firm.”

He’s noticed some of his trees can make another plant each spring. “They reproduce by putting out what I call a ‘tuber.’ It’s a little offshoot. It’s a small plant and it doesn’t have roots for awhile. You have to let it grow big enough to let it develop roots. It starts to be a little tree.  After a while, you can cut them off because they develop their own little roots.”

Hooser likes to transplant the medium-sized trees. “Where you can handle them real easily. The roots are not real big. They’re like worms, I guess, is the best way to put it. Like a circle of little worms. The roots are not deep and wide. They’re fairly close in. So, you can dig them up pretty easily and just move them. As long as you get up under them and pry them up a little bit to see what  you got. Just take that clump of dirt with them and transfer them over.”

He advises people to plant them in full sun.”They are not shy about the sun.”

After they die down, you cut the banana tree to where the trunk is still firm. “You’ll see a little tip. That’s where the leaf is going to start to roll out.”

There also will be a “mushy part” over that spot, Hooser says. “It’s like a growth plate, I guess you’d say. It’s got a lot of nutrients in there to help it get going.”

Does Hooser ever get bananas? “They have the banana stalk. And they’ll get to be about the length of your finger and that's about as big as they get and they fall off. I don’t know whether you need male trees and female trees to reproduce. I haven’t figured that out yet.”

He shares his extra banana trees. “I’ve given away I don’t know how many. A lady stopped by one day and asked if she could have some and I said, ‘Of course you can.’”

Hooser, who doesn’t mind being called a “tree hugger,” is a member of the West Tennessee Urban Forestry Council. “They have a class every year at the [Memphis Botanic] Garden. And then you get a certificate. You go once a week for four hours for about six weeks and that entitles you to volunteer to do forestry things. Like go out and plant trees.”

One of Hooser’s forestry projects was at Elmwood Cemetery. “They have an arboretum where you identify and label trees. Where people can go and look and say, ‘Oh, there’s a walnut tree,’ or whatever. Elmwood has about 105 trees in its arboretum.”

Hooser was part of a group that made sure all Elmwood’s arboretum trees were correctly labeled. He came up with the idea to get GPS coordinates for each tree so people can more easily find the tree they’re looking for.

In addition to his banana trees, Hooser has several types of other trees and bushes on his property. “I just have always liked trees.”

And, he says, “Trees, especially oak trees around here, can attract up to a few hundred species of bugs that like to be on them. Which, in turn, attracts birds. So, we need focus on having native trees.”

Gingko trees, which are native to Japan, are not one of Hooser’s favorites. “They’re pretty in the fall for about 15 minutes. All the leaves come off in two days. They don’t support our bugs around here. We need to have more native bug-friendly/bird-friendly plants.”

So, what about banana trees, which aren’t native to America? “Well, you know, the lady bugs love them. ’Cause I have lots of lady bugs around here. They’re small and cute, but they’re deadly to thrips and all kinds of bad bugs. I’m kind of proud of my lady bug population around here.”

One tree that won’t be brightening up Hooser’s place this season is a Christmas tree. “If I got a Christmas tree, it would last 15 minutes. Between the dogs, I also have two cats. And the inside cat is about two and a half years old and wouldn’t leave it alone for a second. So, I don’t do Christmas trees.”