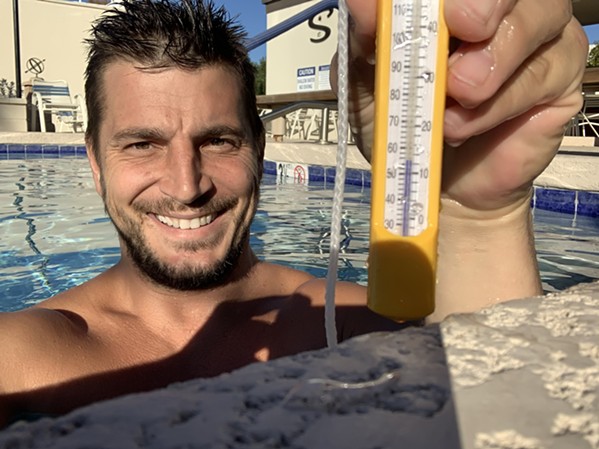 Not that it was scary, but it was just that feeling of being very, very cold. Brrrrrr.

Giesinger, 39, a former Memphian now living in Phoenix, Arizona, where he’s in the luxury real estate business, takes a plunge in his pool every day. Even if the temperature is below 50 degrees.

“I know the pool is there and it’s cold,” he says.

He begins his daily dips in his cold swimming pool in November.  “A lot of people talk about health benefits, but, to me, it’s purely psychological. I don’t want to do it, but after I do it, I’m happy I did it. I enjoy going to the gym to work out, but I don’t enjoy jumping in cold water. They both give me satisfaction when I’m done. The water is literally something I hate doing, but it makes me feel great when I’m done.”

Growing up, Giesinger and water didn’t mix. He almost drowned and had to be rescued three times, he says. “I didn’t know how to swim until I moved to San Diego and learned how to surf when I was 20.”

He’s now a member of Cold Fusion, a Facebook group of like-minded cold plunging people “from around the world” who like cold plunges.

Culhane, who taught Giesinger about cold plunges, began getting in the icy water as therapy after he broke his hip.

Giesinger doesn’t do it for his health. “I do it to face my fears. Everything in your body tells you not to get in the cold water. Nobody likes to do it. But everybody enjoys the feeling you get afterwards. When you get out, it’s a tingly feeling and you almost feel hot.”

Giesinger was at a health retreat when he experienced his first chilly dip. Instead of a swimming pool, he was in an  “ice plunge,” which is “literally a freezer you put food into. Instead of food, you put in water. It was probably 35 degrees. It was iced over. You had to break the ice on top.”

Just wearing a bathing suit, Giesinger stepped in. “I was hyperventilating. And I had everyone around me talking me through it. After 15, 20 seconds is when you start to calm down and sink into your zone. I think I stayed in there for a minute.”

He was a new man after he got out. “That’s when you’re pure red, and your internal life fire is like an adrenaline rush and you’re addicted.”

This isn’t something you should literally jump into, Giesinger says. “There are health risks involved. Talk to your doctor before you try any of this.”

Some people stay in three or four minutes, but Giesinger stays in two minutes. “Usually, you sit in there and you want to get your shoulders below the water. And then focus on breathing. Focus on your breath to calm yourself down.”

That may be difficult because your body is “freaking out. It wants to get out of the water.”

When you do get out, go to a “a sauna or go to warm place to get your body temperature back up.”

Giesinger’s pool now is warming up to between 58 and 60 degrees, but, closer to home, I talked to Daniel Crawley in Collierville. He gets in that icy water, too. He was in his pool on February 10th, the day the ice hit Memphis.

“I got in this morning,” Crawley says. “Did my quick one this morning. I’ll get in this afternoon for five or 10 minutes.”

Crawley, 39, who is with Jennae Realty, began his icy plunges to deal with his autoimmune disorders and extreme inflammation.

“I used to be a fitness trainer,” Crawley says. “I’ve always been into sports. An athlete. I got into liquor sales about six or seven years ago. About that time, or not long after, I started developing all this tightness, inflammation, and pain. I was working out hard, but spending so much time in the car and the road. It continually got worse over the next few years.”

He went to a holistic wellness practice. “They worked on the pain in my feet and ankles and shoulders and hips.”

Crawley knew what he was dealing with “wasn’t normal wear and tear.”

He has numerous autoimmune issues, but the main one is musculoskeletal sarcoidosis. “It restricts your blood flow. It causes the muscles to knot up. I’ve been going to a chiropractor for years and getting massage therapy. When they worked on me, they said they never treated anybody like me. My body is just tense and so knotted up from this autoimmune thing. And being that I’ve always been into fitness and that has always been my outlet, it was really affecting me mentally and emotionally. And just kind of taking away from who I really am.”

He began taking CBD oil, fasting, and doing deep breathing. Then a year ago last Thanksgiving, he took his first cold plunge. “I jumped in my pool for maybe 30 seconds.”

Crawley then upped it to 90 seconds the next day. The more he did it, the more he saw the health benefits. “It dramatically helped with the inflammation, but it’s great for good blood flow and circulation. It’s also great for gut health, helping your body release all your natural hormones. And that makes us function at optimal level.”

By January and February, Crawley was in his swimming pool for 10 or 15 minutes at a time. He wanted to buy a deep freezer and fill it with ice so he could continue his routine in the summer. “But I couldn’t find a deep freezer anywhere because of the coronavirus. Everybody was sold out.”

So, Crawley bought a horse trough at Tractor Supply Company and began doing his ice baths.

He now gets in his swimming pool for about three minutes every morning. He gets in again from five to 12 minutes when he gets home from work.

“Part of what I try to do with it is this deep breathing therapy. So, I’ll just kind of slide in. Get neck deep. And I’ll just keep moving around and try to just absorb the cold water. And get to where I can stand up, do deep breathing, move arms in and out, and get cold water in my rib cage.”

His afternoon cold plunge has another benefit. “My later cold plunge is more for recovering from my day.”

But, he says, “People that have certain health issues shouldn’t do it. If you have heart issues, I would say consult your doctor.”

For him, Crawley says, “It’s always hard to get in, but once you’re in that first minute, you kind of welcome it.”