2015: A Year of Change in Memphis Politics 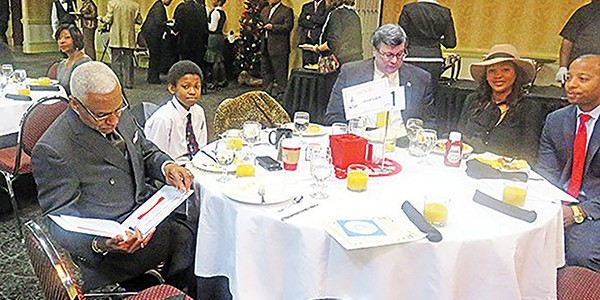 The year 2015 began with a bizarre New Year's Day event in which Memphis City Councilman Jim Strickland was asked to stand up by a reigning figure in city politics, whereupon said official, council chairman Myron Lowery, basically called Strickland out for his presumption in considering a race against incumbent Mayor A C Wharton.

The year will end with the selfsame Strickland preparing to stand on a stage on New Year's Day 2016 and take the oath as mayor, while both Wharton and Lowery exit city government, and Mickell Lowery, the latter's son, wonders what went wrong with his own failed bid to succeed his father on the council.

On the national stage, similar head-scratching must be going on at the Bush family compound in Kennebunkport and in other establishmentarian councils where the old reliable form sheets seem to have gone suddenly and sadly out of date.

Everywhere, it would seem, the representatives and figureheads of things-as-usual are hearing variations on "You're fired," which is how it might be put by Donald Trump, the real estate billionaire and political eccentric whose out-of-nowhere surge to the top of the pack among Republican presidential contenders is one of the obvious indicators of the new mood.

One of the most trusted end-of-year polls of the GOP race had Trump at 42 percent and Jeb Bush at 3 percent. Less extremely, back in our own bailiwick, the formerly invincible Wharton, whose two earlier mayoral races netted him victory totals of 70 percent and 60 percent, finished his 2015 reelection effort with a woeful 22 percent of the vote, a full 20 points behind the victorious Strickland, in what was essentially a four-person race.

It takes no crystal ball or soothsaying skill to see that there was discontent against traditional management — again, what we call the establishment — in all the public places: locally, nationally, and even statewide. Governor Bill Haslam, a pleasant, well-intentioned man with a little sense and sensibility, was spurned by the leadership and rank-and-file of his own Republican Party in the General Assembly in Nashville.

His prize proposal, a home-grown version of Medicaid (TennCare) expansion called Insure Tennessee, was just different enough from the semantically vulnerable Obamacare to pass muster with the state's hospitals, medical professionals, and — according to polls — the Tennessee public at large. It was opposed by the GOP speakers of the two legislative chambers in both a special session in February and the regular session later on and kept thereby from ever getting a vote on the floor of either the House or the Senate.

As Haslam noted in a barnstorming expedition across the state later in the year, the state also had a serious need for upgrading of its roads, bridges, and infrastructure in general, but — once burned and twice shy from the rejection of Insure Tennessee — he dared not advocate a gasoline tax or any other specific plan to raise revenue for infrastructure purposes. He was reduced instead to voicing a hope at each of his stops that an aroused public itself would clamor for such remedies. No such luck.

Meanwhile, the once-dominant Democratic Party had become such a shell of its former self that it was powerless to suggest anything of its own legislatively or to oppose any initiative of the Republicans, who owned a super-majority — and a Tea Party-dominated one — in both houses.

What the Democrats could do, in Shelby County and statewide, was outfit themselves with new leaders. Mary Mancini, a veteran activist from Nashville, became the new state party chairman, while Randa Spears was elected in Memphis to head Shelby County Democratic Party and to impose overdue reform on what had been some serious mismanagement of the party's finances.

The local Republican Party elected a female chair, too,  Mary Wagner, suggesting the existence of a trend and the possibility that, as confidence in the old order continued to erode, political folks were increasingly looking to the women in their ranks as a source of new leadership.

• City and county politics were crucially affected by budgetary matters during 2015.

In the case of the city, austerity measures approved by both Mayor Wharton and a council majority — specifically pension reform and reduction of health benefits for city employees — would taint public confidence in city government and shape the resultant four-way mayoral race to the incumbent's disadvantage.

Even such seeming talking points for the mayor as the new Electrolux and Mitsubishi plants failed to diminish local unemployment to the degree that had been expected.

Mayoral candidate Harold Collins was telling with his mockery of the $10-an-hour jobs for temps he said prevailed at both locations. Memphis Police Association president Mike Williams embodied resentment of lost benefits for first responders in his mayoral bid.

And, most effectively, the aforementioned Strickland hammered away at a triad of issues — public safety, blight, and a need for more accountability on the part of public officials — that his polling suggested were winning themes among voters of all ethnicities and economic classes.

Some considered these mere housekeeping issues, but as poll-derived distillations of the Memphis electorate's concerns about the here and now, they were evidently on point — enough so that Strickland, in many ways a generic white man, would eventually capture 25 percent of the city's black vote, pulling his mathematical share against African-American candidates Wharton, Collins, and Williams.

On the council front, six new members were chosen in open races, and in each case it was the most business-friendly candidate who won. This was undeniably the case with candidates such as Philip Spinosa, a young FedEx executive who raised a prohibitive $200,000 in an at-large race, avoiding public forums with his five opponents or much public contact of any kind except for a forest of yard signs bearing his name along the major traffic arteries of central and East Memphis.

Another financially well-endowed council newcomer, Worth Morgan, advertised himself similarly, but was willing to confront the rest of his field — and in the runoff a well-regarded Republican activist — in open debate, where he held his own.

Along with Strickland's nonstop emphasis on public safety, there was an abundance of pro-police rhetoric among the winners of city races. The question — one that achieved the level of irony — was how all this public empathy, short of restoring lost benefits, could arrest the ongoing fallout from the ranks. Some 200 to 300 cops had already responded to benefit cuts by going elsewhere.

The general sense of rebellion that, in one way or another, seemed to characterize the political scene in 2015 may have found its fullest fruition in Shelby County government, where, after enacting various expected rituals of partisan rivalry amongst themselves, the county comissioners began to mount a coordinated campaign as a body against the administration of county Mayor Mark Luttrell. This development was a direct outgrowth of the budget season, during which commissioners on both sides of the party line convinced themselves that they were being spoon-fed half-truths about money available for public purposes and at year's end were attempting to assert their own authority as superceding that of the mayor.

As with so much else on the political landscape in 2015, the accustomed way was under challenge. The new year of 2016 will presumably have to come up with some answers.