901 FC Battles the Legion to a Stalemate

Tim Mulqueen sprung a few surprises to earn a point in Birmingham.

There was a slight sense of trepidation as the fourth official held up the electronic board after 90 minutes in Alabama. Nine minutes of stoppage time meant that Memphis still had it all to do against a Birmingham Legion side desperate for a late equalizer. A stout defensive performance had seen Memphis control the match for long stretches, but it ultimately had to settle for a point after a 2-2 draw in a game that clocked in at over 100 minutes.

Last weekend, 901 FC blew a two-goal lead to Charlotte in the space of 16 minutes, having suffered a 0-1 loss at home to North Carolina FC the week prior. Something had to change, so Coach Tim Mulqueen reached into his bag of tricks and sent out a new-look lineup. Out came captain Marc Burch (injury), Duane Muckette, and Brandon Allen. Liam Doyle, who had been riding the bench after a few shaky performances to start the season, came in at centerback alongside Triston Hodge, while Raul Gonzalez finally made a full start in midfield. Meanwhile, the industrious Cal Jennings replaced top scorer Brandon Allen up top. 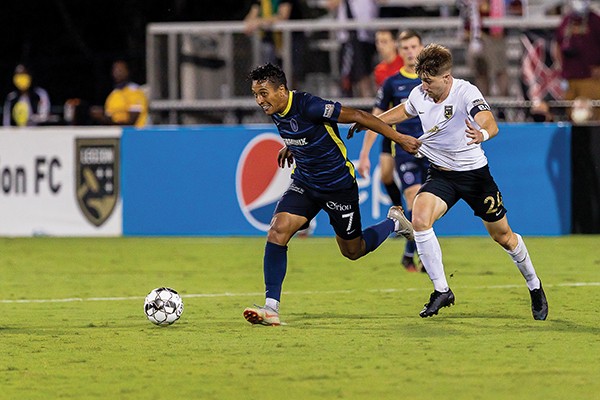 Beyond personnel changes, Mulqueen deviated from his usual 4-3-3 formation to shift to 4-4-2. It proved to be the right call; this season, we've seen 901 FC try to control the game through possession, but on the road against a strong Birmingham side that had swept Memphis away 3-0 earlier this season, the situation called for more grit. Mulqueen had his men relinquish possession this time around, with two banks of four staying compact to limit any Birmingham chances. Unfortunately, the Legion struck first in the 12th minute, Bruno Lapa collecting the ball with plenty of time to settle and fire past Memphis goalkeeper Jimmy Hague and into the roof of the net for 1-0.

But this changed Memphis side wasn't fazed, and it was the Bluff City's turn to flip the script. Just a few minutes later in the 18th, Legion keeper Matt Van Oekel spilled the ball after a corner, and Rafa Mentzingen pounced on the rebound to make it 1-1. In the 27th, Jennings embarked on a solo run from inside his own half and drew a penalty. Keanu Marsh-Brown, his body language exuding self-confidence, kept Van Oekel frozen on his line as he dispatched the penalty low into the bottom corner to make it 1-2 in Memphis' favor.

It was comeback complete, but there was still plenty of time left on the clock. Memphis continued to control the game through defensive organization, but continued to create some chances. Gonzalez showed off his crossing ability with a few sweet deliveries into the box, while Mentzingen continued to showcase his game-by-game improvement. One such display came in the 52nd minute when the Brazilian started a run from his own half and slipped in Jennings for a 1v1, but the Central Florida graduate saw his shot smothered by Van Oekel.

Defensively, Memphis was much improved from last week's second half against Charlotte. Liam Doyle, especially, performed with renewed vigor. Whenever Birmingham did work its way into dangerous positions, I continuously found myself remarking that it was Doyle who was in the right spot to cut out the danger. He was unfortunate to concede the 98th minute penalty, but overall, it looked like a step toward his form from last season's home stretch.

Was the final result disappointing? Yes, but only because, away from home, Memphis was in charge of the game for most of regulation against a top-class opponent (remember, you don't have to have large possession numbers to be in control of a match). Mulqueen made some bold changes and was vindicated by some excellent individual performances. However, if these good performances don't start bringing results, that elusive playoff berth will keep edging farther out of reach. For now, focus shifts to next Saturday's match against North Carolina.