For about five minutes after 901 FC scored at the Mike Rose Soccer Complex, the crowd went wild and pandemonium ensued across Shelby County. Memphis, a USL team, had put the ball in the back of the net against Major League Soccer’s Orlando City and showed that it could compete with a top-level team. City officials, utterly enraptured after forward Elliot Collier headed in the equalizer, allegedly moved to quickly rename an eastern Memphis suburb after their new hero (sources have yet to confirm this rumor, but why else would it be called Collierville?). But, despite a motivated performance from the lads in blue, 901 FC eventually fell 3-1 to the Lions of Orlando. 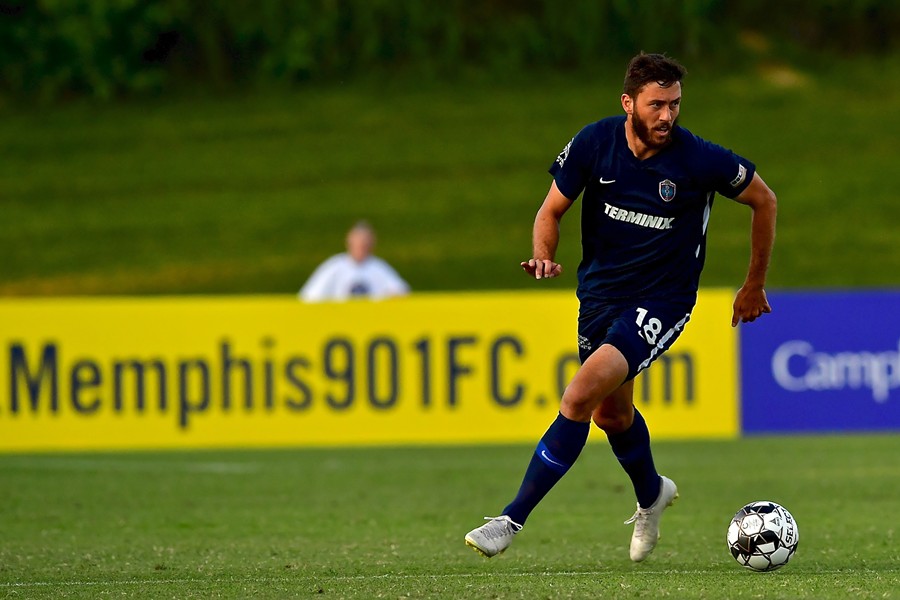 There was a sense of anticipation when 901 FC learned of its fourth round opponent for the Lamar Hunt U.S. Open Cup. Chances to face top-level opposition don’t come around very often, especially a squad boasting the likes of former Manchester United superstar Nani. With their sights fixed on an upset, 901 FC players came flying out of the blocks. For the first five minutes, you could be forgiven for wondering which team played in the USL and which played in the MLS. Memphis flew into tackles, played with aggression, and constantly looked to play around Orlando’s high-press. Jochen Graf had a presentable chance to score after good work by recent loanee Lagos Kunga, but couldn’t make appropriate contact with the ball. While the home team’s early efforts were solid, visiting Orlando’s quality eventually shone through as it took control of possession.


Disappointingly, big names like Nani and Dom Dwyer weren’t included in Orlando’s matchday squad, but players like former MLS All-Star Sacha Kljestan were on the field to wreak havoc. Memphis held its own in the first half and made a few promising forays toward Orlando’s box, but Bluff City’s resistance was eventually undone by a rash challenge. Abdi Mohamed barged into the back of Shane O’Neill to concede a penalty, which Kljestan duly dispatched past backup 901 FC goalkeeper Scott Levene.


From there, the MLSers didn’t threaten too much, and Memphis answered back in the best way possible after halftime. Collier met Adam Najem’s dipping corner-kick delivery and headed the ball past Orlando goalkeeper Adam Grinwis. For the next five minutes, the game opened up, and each side looked capable of scoring the go-ahead goal.


Unfortunately for Memphis, the Lions roared louder and seized on a refereeing error to score the winner. After a blatant trip in the midfield, the ref inexplicably waved on play and allowed Orlando to surge down the field, where Kljestan was on hand again to slot home for his second of the night and make the score 2-1.


Orlando sealed their victory with a scrappy set-piece goal by Robin Jansson, and the whistle blew for full time with Orlando ahead 3-1. 901 FC certainly had cause to feel aggrieved after the defeat, and players voiced their complaints post-game. It’s all the more frustrating, considering that on the balance of play, the contest was fairly even. Sure, Orlando had more possession, but the three goals came off a poor penalty concession, a referee non-call, and set-piece chaos. Memphis had some good moments going for it, with Ewan Grandison having a deflected shot miraculously saved by Grinwis, Collier looking incisive up top next to Jochen Graf, Levene making some good saves, and captain Marc Burch sliding in with some necessary defensive efforts throughout the 90. Plus, Memphis played the game without two of its best midfielders, Duane Muckette and Cam Lindley, who are away on international duty.


Instead of hanging their heads, 901 FC players should use the frustration to fuel their competitive fires as the team travels north tomorrow for an Eastern Conference matchup against 7th placed Ottawa Fury. The Canadians haven’t lost in their last five USL matches, so Memphis should expect a hard fight. A good performance would ensure that 901 FC has momentum going into matches against Charlotte and Hartford, two teams below it in the Eastern Conference standings. A three-game winning streak would put Memphis up to 19 points and back in the hunt for a USL playoff spot.