901 FC Ends on a High Against Birmingham

That’s a wrap, folks, as one of the weirdest sporting seasons in memory came to a close for 901 FC. Despite not having much left to play for, an action-packed 90 minutes at AutoZone Park saw standout performances from the Memphis squad, including a certain red-hot striker. When the dust settled, 901 FC watched the curtain fall after dismantling Birmingham Legion 3-1.

And as early as the 10th minute, 901 FC was setting the tone for how the rest of the game would play out. After a Birmingham turnover, the ball made its way to midfielder Jose Baxter, who quickly turned and played a ball over the top for Cal Jennings to chase. The striker’s left-footed shot stung the palms of Birmingham goalkeeper Trevor Spangenberg, but the blueprint was clear: Jennings would have spaces to attack.

That same duo was heavily involved as Memphis took the lead on 36 minutes. Baxter danced his way around the top of the box before slipping in fullback Rece Buckmaster down the right, whose first-time cross was poked home by the outstretched toe of Jennings.

The Legion equalized shortly before halftime, Bruno Lapa having a second bite of the cherry after collecting his own shot’s rebound off the post and slotting it past Jimmy Hague. But after the break, normal service resumed. On 54 minutes, Keanu Marsh-Brown seized on a poor cross-field pass from JJ Williams and headed the ball into Jennings’ path. After a few deft touches, the attacker made no mistake and made it 2-1 to Memphis.

At this point, it seemed that every time the ball fell Jennings’ way, Memphis would score. Baxter duly obliged this school of thought again in the 86th minute, cleverly backheeling a pass in front of the goalscorer, who brushed off his marker as if it were nothing and buried the shot to complete his hat trick.

The whistle blew at 3-1 in Memphis’ favor, the team’s second win in a row, both by the same scoreline. At the heart of it all? Cal Jennings. The University of Central Florida grad has dispelled any notions about who should be starting up top for 901 FC next year, with a ludicrous eight goals in his last four matches (nine goals for the season in 14 appearances). Along with signing a new head coach, retaining Jennings should be top priority in the offseason. 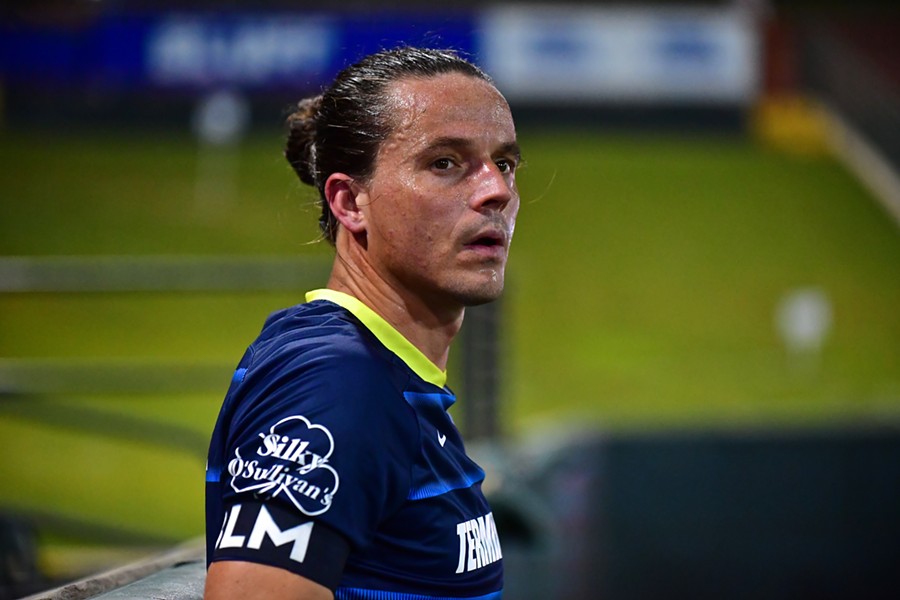 Behind the attack, Memphis’ midfield looked impressive for the full 90. Tommy McCabe has been an astute acquisition on loan, while Baxter put himself at the heart of every good move. They rotated seamlessly alongside Duane Muckette; every time one played a pass, there would always be two other passing options, creating triangles all over the pitch and allowing for quick ball circulation. Most intriguing, however, was the return (in my opinion) of peak Muckette. At his best, the Trinidadian international is a constant outlet, capable of breaking pressure and playing penetrative passes. He looked a bit off-color for most of the year, but reminded us of the immense quality he possesses.

Focus now shifts to the offseason, where the organization will have to make some big decisions on player acquisition and retention, including figuring out how to replace retiring captain Marc Burch.

For some deeper musings on how this season unfolded, be sure to pick up next Wednesday’s issue of the Flyer.