901 FC Loss to Indy Puts a Crimp in Playoff Hopes

The trip to Indianapolis held so much promise: 901 FC's recent string of results positioned it to take a crack at playoff qualification down the home stretch. And with the Indy Eleven having lost its last four games, high-flying Memphis was well poised to bag three more points. Alas, one of this season's Eastern Conference powerhouses managed to regain its mojo and beat Bluff City's best efforts. After a 3-0 loss on the road, Memphis' hopes of reaching the postseason seem grim.

Coach Tim Mulqueen put out a strong starting 11, as expected, and the boys more than held their own throughout the 90 minutes. However, Indy showcased a ruthless efficiency that spoke to its experience as a franchise. Memphis conceded opportunities early and dug itself into a 2-0 hole within 22 minutes. What rankled was that rather than concede from sharp attacking play by a superior opponent, 901 FC fell apart on set pieces twice in quick succession. 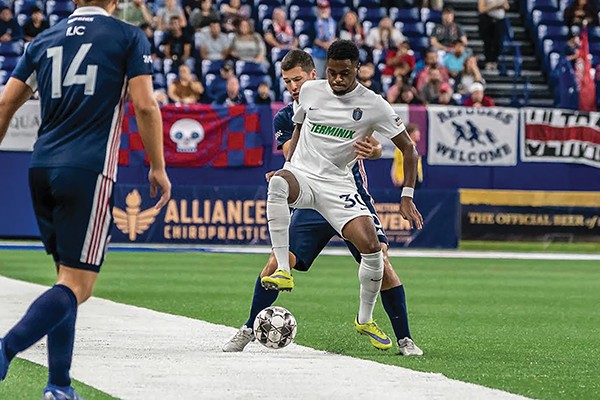 Down two goals on the road is always a tough proposition, and it put the onus on Memphis to make something happen. Indy was able to sit back a little more without leaving its defense open. And the longer Memphis went without a goal, the more it felt inevitable that Indy would wrap it up with a neat little bow.

Sure enough, Memphis conceded a third goal on the break with less than 15 minutes left to play, creating what might seem like an insurmountable gap between 901 FC and the last playoff spot. But the roster that Mulqueen has organized isn't one to give up without a fight, and even after letting in two early goals, the team continued to grit its way through a tough matchup.

Earlier in the season, 901 FC relied on Elliot Collier's magic to make things happen on the field, but Memphis' possession game has markedly improved since Mulqueen finished constructing his new-look squad. Even when Indy pressed high, the midfield circulated the ball quickly. Cam Lindley and Dan Metzger buzzed about providing outlets for teammates and looking for options to move the ball forward.

On the attacking front, Marcus Epps came to the fore, constantly driving forward with purpose and precision to create opportunities for himself and others. Two of his strikes accounted for Memphis' three shots on target, and he was unlucky not to find the back of the net on this occasion. Brandon Allen, on the other hand, was effectively marshalled by the opposition defense. Indy held him to just one touch inside the box in 90 minutes, essentially neutralizing his goal-scoring threat.

Losing 3-0 doesn't look good, but it doesn't mean Memphis was comprehensively outclassed. Indy scored on three of its four shots on target, a usually unrealistic conversion rate. This weekend's opponent likely won't pose such a threat. The visiting Charlotte Independence sits two spots below 12th-placed Memphis in the Eastern Conference standings (although it has won its last two games). 901 FC is a different prospect since Charlotte won the reverse fixture 1-0 back in July, so the game should be manageable at AutoZone Park. Mulqueen has to mark this game as three points, which would bring Memphis back within touching distance of a playoff spot.

Birmingham Legion narrowly holds the final qualification place, in 10th, but is tied on 40 points with 11th-placed Charleston Battery. Memphis sits six points behind at 34, but the Legion's next game is away at Hartford Athletic, the worst team in the United Soccer League this season. Meanwhile, the Battery hosts the iffy Loudoun United. Both playoff contenders can reasonably expect to win their matchups, which means Memphis would need to win six points in its final two contests while both of its rivals lose their remaining games. It's unlikely, but 901 FC didn't come this far just to give up. The desire and tenacity on display in recent weeks shows how much the team cares, so there's nothing for fans to do but buckle up and enjoy the ride.