No man is an island, but Brandon Allen probably felt like he was marooned on one for much of 901 FC's match against Loudoun United. But that's the life of a central striker; sometimes, there's naught to do but run around gamely up top as things struggle to come off. It might be understandable that his head dropped after missing a golden opportunity to equalize early in the second half, but Allen didn't hide, instead meeting Lagos Kunga's cross to poach the winning goal in a 2-1 victory on the road.

There's still a gap between 901 FC and the last playoff spot, but the team is playing with confidence down the home stretch after picking up three wins in a row.

Memphis came into its matchup against Loudoun in good form, having won two on the bounce, but the potential for calamity was there with captain Marc Burch missing through yellow card accumulation. And 901 FC fans surely started to bite their nails when the normally imperious goalkeeper Jeff Caldwell raced out of the box to gift Loudoun's Kyle Murphy an easy 30-yard lob into an empty net only five minutes in. Perhaps earlier in the season, that would have been the catalyst for another poor showing, but Memphis is now a team that clearly enjoys the taste of consecutive victories, so why not make it three in a row? There was certainly a fortuitous development when the opposing Nelson Martinez received a red card for a reckless challenge, but Memphis piled on the pressure to snag an equalizer. 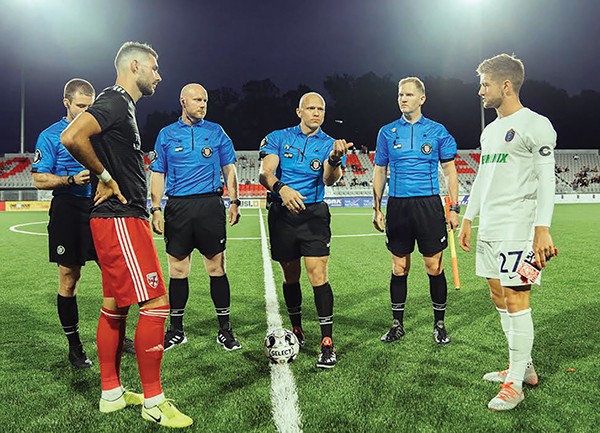 With a man advantage, 901 FC controlled the flanks, and attacking the right channel proved effective when chasing the game. Ewan Grandison, filling in at right back, played a line-breaking pass to Elliot Collier, whose cross from the byline produced an own goal to tie the game. Later, substitute Kunga surged to the byline and cut the ball back. Allen ghosted past a helpless Loudoun defense to meet the ball at the near post and score the winner. Another goal, and another three points for the victory.

For all their qualities, no other player on the roster has Allen's predatory instinct in the box. He is now Memphis' leading scorer for the season with six goals. Recent signing Marcus Epps surges upfield with drive and purpose, but is yet to display any composure when taking a shot on goal. On another note, Collier's recent return from injury shows just how valuable his play is to this team. His dribbling ability remains unparalleled throughout most of the league.

It's all finally starting to click for Memphis. Each of its three consecutive victories has been won after initially falling behind, speaking to a newfound grit and character. Allen's ruthlessness in front of goal will be crucial as 901 FC chases a playoff spot. His conversion rate is currently sitting at an impressive 26.9 percent, so if his teammates continue to find him in the box, he'll put away chances.

When Memphis comes up against top teams, it will be harder to consistently find Allen, so the onus will be on the rest of the attack to create opportunities. The winning streak couldn't have come at a better time. 901 FC's next three games are at AutoZone Park. Top-10 opponents St. Louis FC and the Pittsburgh Riverhounds will be tough, but the third match is against a direct rival for that last playoff spot, Bethlehem Steel. With only seven games left in the regular season, it's time for team leaders to step up and carry the franchise over the line.