I think A Bigger Splash could represent a turning point for my career as a critic: It's the moment when I get to identify, and hopefully lend a name to, an emerging genre.

Hear me out: The last few years have seen a slow trickle of films produced in Europe that, despite their outward differences, share certain structural similarities. A group of people, usually white but always unusually rich and privileged, travel to an exotic destination for fun and relaxation. Fine wines are consumed, and lots of sex is had. But their attempt to outrun their personal demons is short-circuited by an unexpected visitor, and soon paradise comes to seem like an expensive prison. Call them First World Problems (FWP) films. Last year's Youth, an Italian film starring Michael Caine and Harvey Keitel, sequestered the aging actors in a resort in the Swiss Alps where they are driven to despair and then rediscover the joys of life while looking at a nude Miss Universe. It was one example of the genre, which seems to be driven financially by Italian tourism department tax credits.

Italian director Luca Guadagnino's A Bigger Splash follows the FWP template by sending Tilda Swinton to the Mediterranean island of Pantelleria. Swinton plays Marianne Lane, a Bowie-esque rock star who has retreated to the sunny little island to recover after surgery to remove vocal cord polyps. She's happily napping in the sunshine with her boyfriend Paul (Matthias Schoenaerts), a filmmaker trying to stay sober after a drug-induced suicide attempt a couple of years ago, when trouble arrives in the person of Harry (Ralph Fiennes) and his daughter Penelope (Dakota Johnson). Harry is a freewheeling rock producer who has only recently acknowledged that Penelope is his daughter. The reason for his Mediterranean sojourn is ostensibly to get to know his progeny, but since his chosen itinerary is a visit with his ex-girlfriend, Marianne, it soon becomes obvious that his real motives are different from his stated mission. Penelope is initially starstruck, but that doesn't last long as she sees that the glamorous folks her dad keeps company with are just flawed human beings like the rest of us. 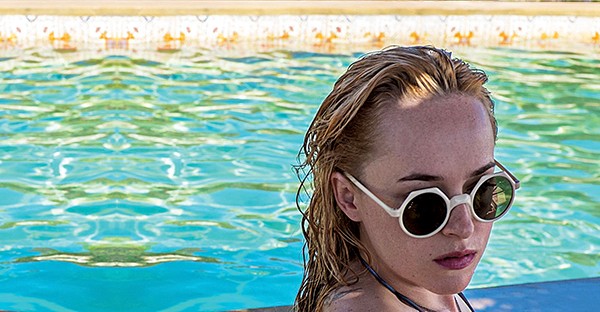 When Swinton rolls out of bed, she already has the gravitas to play a rock star trying to do the right thing, so for an added degree of difficulty, she plays Marianne as practically mute. If she speaks, she risks undoing the healing her voice sorely needs, so when she does get worked up enough to speak, her words come out as a feeble croak. Swinton is able to conjure more emotion with simple and subtle pantomime than most actors can manage with a full script. Fiennes gets to play essentially the opposite of his fastidious Gustave from The Grand Budapest Hotel. Unlike Marianne, Harry hasn't accepted any of the responsibility that's supposed to come with age, but where he and his ex once had wild partying in common, now he's trying to keep the party going on his own, and it's getting a little pathetic. Their slowly building emotional tug of war is the film's heart and soul.

Just as all four main characters have backed themselves into a corner and things are about to get really interesting, Guadagnino and screenwriter David Kajganich cop out. Instead of resolving the converging tensions, they try to raise the stakes, but succeed only in breaking the spell of fermenting decadence. A Bigger Splash is not a bad film, per se, it just never lives up to the early promise of its crackerjack cast. But since these FWP films are financed by tourism-promoting tax credits, it did succeed in one respect: I really want to go to Italy now.