A Debate of Grilling Bratwurst

Do you soak ’em in hot beer or not?

People from Wisconsin are generally a congenial, easygoing lot. Those Cheeseheads love their Green Bay Packers, their Friday Fish Frys, and their beer and bratwurst, and they aren't big on drama. Until Scott Walker came around, there wasn't much to argue about, except, well, beer and bratwurst.

Wisconsin's largest ancestry group is German, and the original immigrants brought their bratwurst with them. Today, bratwurst are a defining characteristic of the local cuisine. And while brats — which rhymes with "pops," not "rats" — are beloved by all Sconnies, there is quiet discord with respect to the purely Wisconsin ritual of bathing brats in beer. They disagree, for the most part politely, not only over when to do this, but also why.

The dominant sentiment among beer soakers, within and beyond Wisconsin, is that the brats should soak in hot beer before going on the grill. There is, however, a small but highly knowledgeable contingent of brat scholars, centered on the shore of Lake Michigan, that puts its brats in warm beer after cooking, not before.

Bratwurst is a raw, pork-based sausage that must be thoroughly cooked before serving. The idea behind soaking bratwurst in hot beer prior to grilling is that they cook all the way through ahead of time, so the grill master needn't worry about serving an undercooked sausage. The pre-cooked brats spend a brief amount of time on the grill to get browned, and are then served. Less time on the grill makes the brat less likely to dry out, and some pre-soakers believe the brat soaks up enough beer to influence the flavor and juiciness. The beer also makes the sausage casings more pliable and less likely to split.

Once, when I told a bartender from Milwaukee that I wanted to try the beer bratwurst thing, he preached to me about the holy trinity of beer flavorings: garlic, onion, and black pepper. And before he would agree to fill my growler, he made me promise to pre-cook in Old Milwaukee, not the fancy microbrewed IPA he was pouring.

But in Sheboygan, Wisconsin, widely considered to be the capital of the bratwurst belt, many locals politely shake their heads at this pre-soaking business.

Chuck Miesfeld is a fourth-generation sausage maker and owner of Miesfeld Meat Market in Sheboygan. He agreed to speak with me about when to soak a brat in beer, and why, in hopes that it might help "straighten those people out."

By "those people," Mr. Miesfeld was referring to his countrymen in Milwaukee, Green Bay, and Madison, as well as further-flung wannabe Sconnies on the internet, who believe that pre-cooking brats in beer before grilling them is proper.

"The whole deal with soaking them in beer," Miesfeld told me, "is about keeping the brats warm until you put them on your hard roll. If you're cooking brats on a charcoal grill, which is the only way you should be doing it, and there's nobody standing there with a hard roll, there has to be a way to keep them warm."

The hard roll of which Miesfeld speaks, the only Sheboygan-approved brat holder, is the antithesis of the soft hot dog buns upon which brats are too often served. Even at Miller Park in Milwaukee, the only baseball stadium in America that serves more brats than hot dogs, brats are served on those "squishy buns," as Miesfeld calls them with disdain. If you don't live within striking distance of a Sheboygan bakery, your best bet would be a German or Austrian bakery that makes a hard-crusted white dinner roll. In Sheboygan it's customary to pack two brats into a single hard roll.

As for the idea that the pre-soaking results in a juicier brat, Miesfeld isn't impressed. He says if a brat dries out on the grill, it was either overcooked or a sub-par product.

But while the primary purpose of a post-grill soak in beer is to keep the brats in optimal shape for serving, Miesfeld concedes that the submersion adds more than heat. 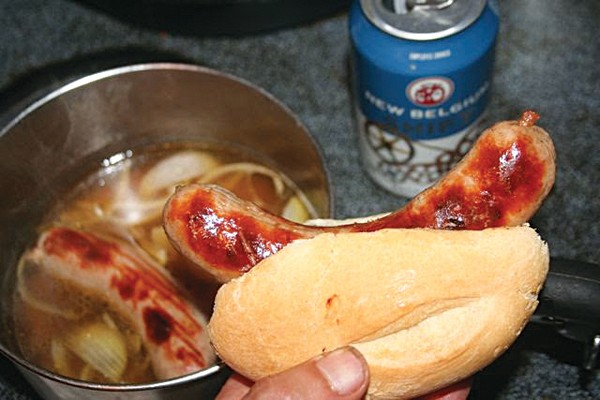 Miesfeld's post-cooking brat bath includes butter and onions in the beer. And as the bartender from Milwaukee had advised, Miesfeld urged me not to use good beer. It should be kept at around 170 to 180 degrees, he said, which is not quite simmering. And there is no place for black pepper, despite what the bartender from Milwaukee says. "If you have to add black pepper, you've got a shitty brat."

While he isn't a pre-soaker, Miesfeld does drop the brats into cold water for five minutes before grilling, which softens the casings, making them less likely to split.

The key to the proper grilling of brats is to not have the fire too hot, he told me. Control any flare-ups with water and turn them often. Skilled brat chefs can determine with a squeeze of their fingers when a brat is cooked, but a meat thermometer, poked into the end of just one brat will do. When the internal temperature reaches 180 degrees, it's done.

I followed Miesfeld's instructions, mixing a can of cheap lager with a tablespoon of butter and half an onion, sliced. And against everyone's advice, I couldn't help making another beer bath with a high-quality IPA. I don't cook with wine I wouldn't drink, and I figured the same applied to beer, though it hurt to pour such good beer into the pan.

I compared brats that were pre-soaked in each of my two beer baths with those that were immersed after grilling. I also made a brat that was simply grilled, and without any exposure to beer (except in my mouth).

The brats placed in beer after grilling were noticeably juicier, with the first bite exploding awkwardly in my face. They had more of a beery flavor, and I'm sure the butter didn't hurt. I preferred them. The pre-soaked brats were closer in flavor to the non-soaked brat but juicier, but they were less juicy than brats soaked after cooking.

As for any difference between the fancy IPA and the cheap lager, I couldn't detect any. At least, on this point, we can all agree.