Southaven Pontiac GMC dealer Henry Ware is known for his commercials boasting "Always right on the corner, right on the price." Even for a troubled brand.

Ware was the last dealer in the region to receive the prestigious Pontiac Select Leader Mark of Excellence award, just days after parent company General Motors Corporation announced the end of Pontiac. 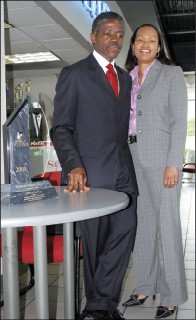 "The GM Mark of Excellence will still be given out in the future, but not for the Pontiac brand," said Joe Cossman, the regional zone manager for GM who presented the award to Ware in a modest ceremony at the dealership last week.

Ware is one of 14 dealers in the South-Central region to receive the award despite GM's announcement that it will close 13 plants and half of its dealerships and cut 21,000 factory jobs.

The changes are part of GM's effort to restructure in the wake of the Big Three automakers' recent economic troubles. GM has manufactured Pontiacs since 1927.

Though some Pontiac dealers are being forced to close, Ware said his dealership will remain open since he also sells Buick and GMC vehicles. At least 30 percent of his lot is made up of Pontiacs, however, and he'll continue to sell that existing inventory.

"We'll also have Pontiac parts available for up to 10 years," Ware said.

Ware said he isn't very worried about the end to the Pontiac brand. He and Cossman agreed that Pontiac's end could mean improvements for GM's other vehicle lines.

"As Pontiac shrinks, I think Buick will see a renaissance," Ware said. "The Buick line will be what it was when I started selling cars 20 years ago. People were proud to drive a Buick back then, and I think we'll see some unique new Buicks coming out."