“A Kind of Confession" at the Metal Museum.

Almost a gun, almost a microscope, Senescopia by David Clemons

There is nothing creepier than a useless machine. I don't mean an obsolete or a broken machine. I mean a machine that clicks and whirs pointlessly, full of complex mechanics that achieve nothing. We count on our machines to provide simple solutions to clear problems. A pointless machine unsettles both question and answer.

Metalsmith David Clemons, a medical illustrator-turned-craftsman, is expert at creating functionless machines. His sculptures, on view now as part of the Metal Museum's "A Kind of Confession," are threatening and oblique in equal measure. Works such as 2007's Sensoscopia draw from the visual index of antiquated medical devices and futuristic weapons. Senescopia is almost a gun, almost a microscope — true to form but completely neutered of purpose.

Clemons, who is black, places his artistic concern in "things that deal specifically with racial identity and construction," whether that identity is formed from within or without. Sculptures such as Blood (2004) and Polyps (2013) deal with identity on multiple levels — not only African-American identities forged around a long history of brutality, but also to the industrial history of steel and wood. Clemons' materials are not a casual footnote in his work; he uses steel's material vocabulary to pose an ontological question. Taken apart, the shiny joints and levers of Senescopia mean nothing, but imagined together become an identifiable (if purposeless) system. Clemons' machines ask: At what point do we identify a series of isolated characteristics as a definite something? Or someone?

Metal is an apt material to communicate America's violent history of racial injustice. The artists in "A Kind of Confession" use the tropes of metal (its association with jewelry, weapons, medicine, farm tools) to re-envision the history and meaning of the material's use. "A Kind of Confession," curated by Grace Stewart, presents work by 11 black metalsmiths, divided into three categories: work that addresses African roots, colonial history, and contemporary issues. The title is drawn from a James Baldwin quote: "All art is a kind of confession, more or less oblique. All artists, if they are to survive, are forced, at last, to tell the whole story; to vomit the anguish up." As featured artist Helen Elliott puts it, these works are an attempt to "tell the truth and shame the devil." 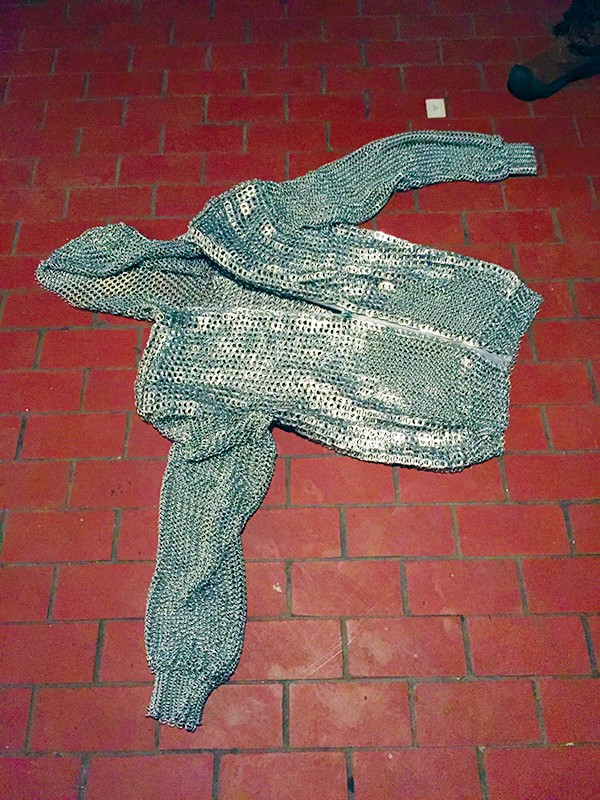 Shani Richards' Bulletproof, a chainmail hoodie made out of soda tabs, references teenager Trayvon Martin's death at the hands of George Zimmerman. It is displayed spread across a low pedestal, sleeves slightly askew. It is a clear memorial, simple and moving. Richards communicates, in one piece, something that a million photographs, news blips, and think-pieces couldn't: Violence is quiet and senseless. We are left trying to make up the difference in hoodies and soda tabs.

Other stand-out works from the exhibition include Tanya Crane's Which Side Do You Pick, a chain made out of a hair pick and plated gold; Joyce Scott's beaded statuette of a woman, titled He's My Husband and He's My Baby; and Sonya Clark's Roots & Branches (In Hair and Copper). In a time when much contemporary artwork feels tone-deaf to political and social realities, these works are tuned in. Their success is immediately related to the way that the artists consider their materials.

Taken together, the work in "A Kind of Confession" is the most challenging contemporary art Memphis has seen in recent memory. I'll follow critic Ben Davis in saying that we need a "more organically political character for contemporary art" and that this can only be achieved through artists focusing on our country's complex history of injustice. We need artists and curators who can see the pointless machine, piece for piece.