The University of Memphis’ decision to raise its minimum wage is a good first step, but there is more work to be done. 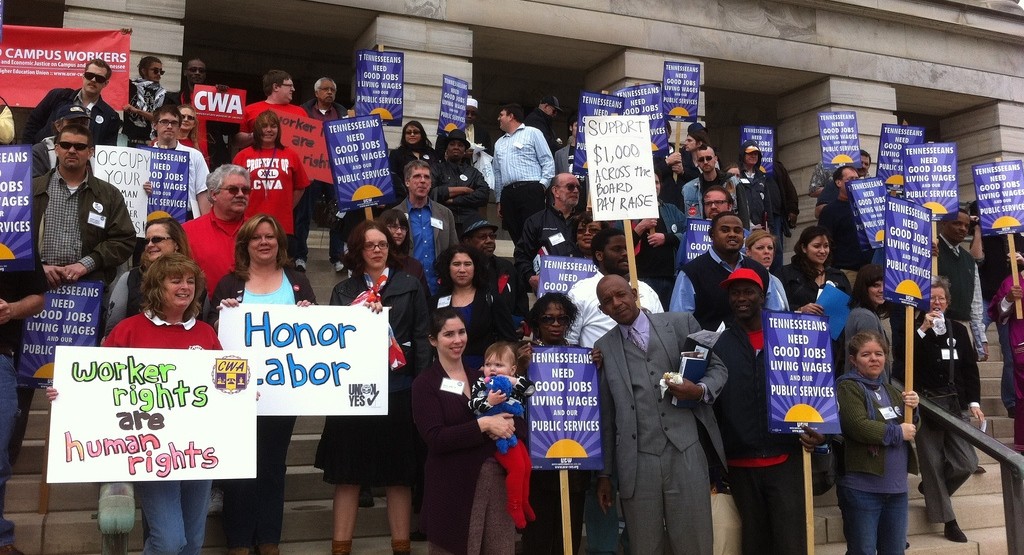 Memphis has the second-highest unemployment rate among large metro areas, and the highest poverty rate of cities with less than one million people. Nearly half of all children here live in poverty, and average wages are 11 percent under the national mean. In this bleak setting, efforts to raise wages are particularly important. So it was a significant victory last week when the University of Memphis affirmed plans to raise employees' base pay to $10.10.

Nationally, economists have raised concerns that income inequality and low wages pose serious threats to economic growth. Some cities have responded to these concerns, and to growing public pressure, by hiking minimum wages significantly. Those that have are seeing some of the fastest job growth in the country.

Not so in the Volunteer State. In 2012, Tennessee's legislature passed a bill barring local government from raising minimum wages or setting any number of community-benefit employment standards. The law preempted efforts to raise Memphis' minimum wage. It also overruled a 2006 Memphis city ordinance, which required that city employees and workers at city contractors, be paid a living wage — a level that meets the cost of living. In 2014, ballot initiatives to raise state minimum wages passed in four red states, but Tennessee was not one of them. Governor Haslam has stood firm by an economic policy that has given our state the highest rate of minimum wage jobs in the country.

It is in this hostile political environment that the University of Memphis, bowing to protracted pressure from a grass roots movement, raised base pay to $10.10. The increase affects about 130 workers and establishes a pay floor 40 percent above the federal minimum wage. The new policy is a bump for Memphis' economy and a testament to what committed grassroots organizing can accomplish.

Four years ago, three groups came together to launch a living-wage campaign at the University of Memphis. United Campus Workers is a union of higher-education workers. Progressive Student Alliance is a group of active and concerned students. Workers Interfaith Network (WIN) is a faith and labor community organization that led the broad effort in 2006 to gain a city living-wage ordinance. The three united around the idea that a job should keep you out of poverty, not in it; and that the University of Memphis needed to do better.

The campaign kicked off with a campus speak-out to shine a light on U of M's wage policies. More than 75 percent of workers in facilities services made less than the cost of living; scores of custodial employees were paid less than $8 an hour, even after years of service. Two U of M custodians in the union, Emma Davis and Thelma Rimmer, shared the story of their personal struggles trying live on poverty wages.

The next year Davis, Rimmer, and I, and 1,500 other working people from Tennessee went to Nashville to meet with legislators and rally for living wages. Later that day, 50 workers took over the legislative chamber where senators were voting on anti-worker bills, and seven of us were arrested in an act of civil disobedience. We returned to the capital every year after that and continued to rally on campus. Last year, we were joined by fast-food workers, and the national movement for $15 and a union. We continued to organize, write articles, hold demonstrations, and send postcards, petitions, and letters to the governor, the legislature, and to the president of the University of Memphis.

And then, almost suddenly, U of M made its announcement: Base pay would rise to $10.10. Despite an adverse political climate, we won. Our lessons — organize, connect to national politics, and apply pressure to a leader with executive authority — will need to be applied elsewhere. Even $10.10 is still below the cost of living, and the raise excludes part-time employees, adjuncts, and subcontracted workers. And there are still tens of thousands of low-wage workers making less with other employers in Memphis.

We need to pressure more employers to raise pay and force the city to require that companies receiving tax breaks commit to pay their workers fairly. And ultimately, we need to build a fair economy, united in the idea that everyone deserves a job that keeps them out of poverty, rather than in it.