To celebrate the Flyer’s 25th year, we’ll be using this space each week to look back on stories from past issues.

In the January 23, 1997, issue of the Memphis Flyer, Phil Campbell detailed a struggle between a tree and a writer's statue in Oxford, Mississippi.

The proposed statue would be a tribute to William Faulkner, the Nobel Prize-winning author from Oxford, who penned Southern classics such as The Sound and the Fury and As I Lay Dying, among many others. The writer was born in New Albany and bought a home in Oxford for his family in 1930 that he called "Rowan Oak." Despite this, however, the town had not done much to pay homage to him, according to the article.

"Even Square Books, the town's popular bookstore, displays more photos of one-time Oxford resident John Grisham than it does of Faulkner," the story read.

The statue was set to be built with $70,000 raised by businesses and the Oxford Board of Aldermen, one that would show Faulkner "standing with dignity, with a pipe in his mouth, looking off into the distance, sporting his signature tweed coat and baggy britches."

Faulkner's oldest-living relative at the time, his nephew Jimmy Faulkner, gave his approval for the project until Oxford residents became upset with how the project began to unfold. 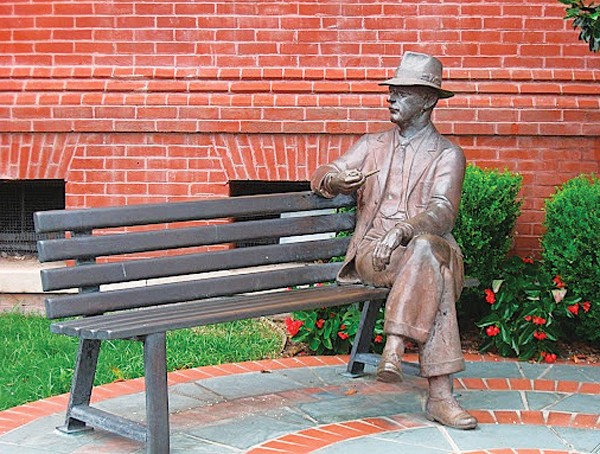 On the plot in front of Oxford City Hall, where the statue was to be raised, sat a magnolia tree. The mayor during that time, John Leslie, privately told the city's electric department to cut down the tree because "the board of aldermen hoped to pass an ordinance creating a 'tree board' that would effectively have prevented the tree from being removed," Campbell wrote.

Residents wrote letters against the mayor's actions and two dozen showed up to the tree stump on one particular day, even laying a wreath on the dead tree. The Faulkner family pulled its support of the project after the writer's daughter, who lived in Virginia, spoke out against the tree being cut down. The nephew originally believed the project had the daughter's blessing but ended up speaking out against it, even going in front of the board of aldermen.

"Jimmy Faulkner appeared before the board of alderman, with dozens of other people in tow, to protest the mayor's decision the week after the tree was felled. His presence made a strong statement, given the family's affection for privacy and general apathy for politics," the story read.

Some people felt "manipulated," and the convoluted situation surrounding the fallen tree involved many parties. Joseph Blotner, who wrote a biography on Faulkner, was quoted in the article in favor of the statue.

"In 'Go Down, Moses' and other works, Faulkner deplores the disappearance of the big woods in the Delta," he said in the story. "However, there are many, many magnolia trees in and around Oxford. There is only one native son that brought honor to his town, his state, and his country."

Despite the controversy, the statue went up as planned. The bronze statue now sits in front of City Hall in Oxford, depicting Faulkner on a bench with his legs crossed and holding a pipe.