A Look Back at the Memphis Tams

This Sunday, the Memphis Grizzlies will don throw-back Memphis Tams uniforms for a home game against the Utah Jazz. Memphis writer Sherman Willmott sent us this story about Memphis' ABA franchise and we thought we'd share it with Flyer readers.

On January 26, 2012, the Memphis Grizzlies debuted their throwback ABA Memphis Tams uniforms on the road. The basketball and fashion worlds have not stopped talking about them yet. And not in a good way. How could the Tams uniforms have been so ugly? Retrowear, nostalgia, and old-school uniforms have become an extremely popular fashion industry - especially when it comes to NBA uniforms and the free-ballin' '70s of the ABA -usually for a good reason. People want to relive that wild, over-the-top look. Unfortunately, the Tams never had that. Their predecessors the Pros and their next of kin the Sounds both had a much better look and design.

In 1972, Charles O. Finley was on top of the baseball world with his Oakland Athletics. In December, after winning the World Series with the A's that fall, he won Sporting News Man of the Year Award.

In the summer of 1972, the Memphis Pros were insolvent and gasping for air. After two financially unsuccessful seasons in the ABA, a deal for Langdon "Zip" Viracola to buy the Pros fell through. A phone call was placed to the eccentric, irascible, and unpredictable Mr. Finley. On June 17, 1972, Finley told a friend, "Yeah, I think I'll buy a team tomorrow."

Memphis Pros chairman of the board Buddy Leake said Finley was the last person they called. Finley came up with $110,000 to cover the Pro's debt to the league and approximately another $100,000 to buy them from the thousands of Memphis Pros stockholders, most of whom were Memphians who had ponied up anywhere from five dollars to a few thousand dollars. In exchange for selling their stock to Finley, they only received the opportunity to buy their tickets at a discounted price. Upon buying the Pros, Finley said, "The ABA has the right idea-this ball, the zesty uniforms, and the colorful shoes." He then immediately threatened to move the team to Minneapolis and proceeded to forget all about the zesty uniforms and the colorful shoes. An Oakland radio announcer asked him why he bought the Pros and Finley replied, "I don't know. I don't know. I don't know."

Finley, famous for such A's promotions as Hot Pants Night (6,000 sexy ladies in the house!) and Mustache Night (where he paid his baseball players $300 each to grow mustaches), did not like the Pros name and began a name-the-team contest for the fans to come up with a new name. Finley offered what certainly was the bulk of his marketing budget as a prize to the winner, a relative king's ransom of $2,500. Thousands of fans sent in their ideas.

The Pro's uniforms were destined to be changed regardless of the name of the team. As far as the team's color scheme, the die was already cast. Kelly green and gold were the only colors Finley liked. Besides the A's, Finley also owned the NHL's California Golden Seals. Finley had been obsessed with the color scheme years before that. Explaining why the green and gold was inevitable for his ABA team: "My baseball team wears kelly green and gold, my hockey team wears kelly green and gold, and I wouldn't want my basketball team to feel bad, so they'll be in kelly green and gold too." In the 1960s, even before Finley moved the Athletics from Kansas City to Oakland, he considered moving them to Louisville and began touting the colors as Fort Knox Gold and Kelly Green. When he moved the Athletics to Oakland, he changed the pitch to "California Gold and Kelly Green."

Finley told The Commercial Appeal his obsession with kelly green and gold began with his children: "Our two daughters are red-headed with brown eyes, and my wife would always dress them in green and gold. I saw so much green and gold when those kids were babies that I cultivated a love for those colors. I just think it's the most beautiful color combination of them all." While the color scheme had been criticized through the years, Finley was not one to truck with aspersions. Speaking about the A's uniforms: "I don't care what these writers think about my uniforms. I could care less. The main thing is my wife and I designed the uniforms, and we like the uniforms and we own the team, and my players love the uniforms, and what do I care whether anybody else likes them or not?"

In July 1972, Finley declared William Barrett of North Mississippi the winner of the name-the-team contest (including the $2,500 bounty) for coming up with one of the worst names in sports franchise history - the TAMS. Considering the runners-up for the contest: Cottoneers, Mockingbirds, Balers, Tenns, and Pharoahs, which later became the name of the indoor arena football team in 1995, the TAMS was not so bad. The explanation for the name was an acronym for Tennessee-Arkansas-Mississippi, an appeal to the team's regional fan base. While this might have worked as a Chamber of Commerce slogan, it failed miserably as a professional sports league name and logo.

The other, far more relatively interesting if not hard to fathom, thesis for the TAMS name offered by Barrett was that Tam o' Shanter was a character in a Robert Burns poem and a Tam was a woolen cap of Scottish origin. The rationale for this extremely tentative connection to Memphis was that many early Memphis settlers were of Scottish origin. Finally, Barrett opined that a Tam was in fact on top (of the head), which of course the TAMS never managed to be in their two years of existence. Nevertheless, the Tam, to this day, is one of the most farcical promotional aspects of the wild and wooly ABA, where truly almost any promotion occurred. Finley must have been thinking positively of the fashion royalties about to come through the cash registers when he told The Commercial Appeal, "People can't walk wildcats down the street. But Tams- there's something. We'll want everyone wearing one."(On February 12th at FedExForum, at least 5,000 people will be.)

As long as Finley owned the Tams, the focus was less on the team's play and more on the unorthodox manner in which he ran the team and how much longer the team would continue to exist. Instead of signing star center Wendell Ladner when he was holding out for a $17,000 raise, Finley rescinded his $5,000 raise offer and let him stay at home as one of the longest holdouts in the history of the ABA. Notoriously cheap, Finley would not bid up for college talent, did not pay salaries in the off-season, and only had one person on salary a week before exhibition season began - trainer Don Sparks. In their second season, Finley finally hired coach Bill Van Breda Koff four days before the first exhibition game. The Tams defined a "seat of your pants" operations. From one season to the next, no one knew if the Tams would return. 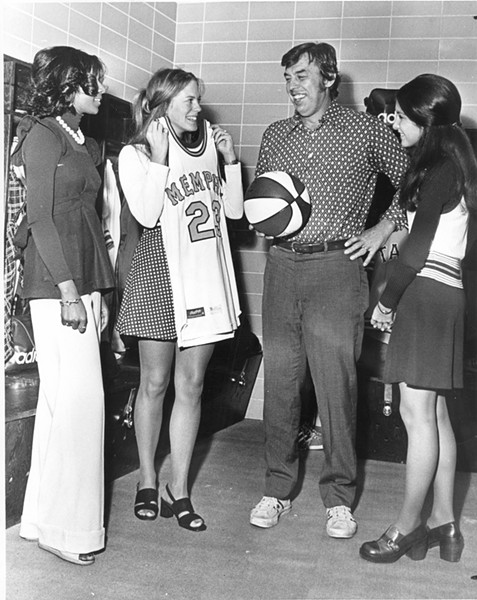 Considering Finley's marketing budget (or lack thereof) and unwillingness to focus on details like hiring employees or hiring a uniform designer, it is not a stretch to assume that when it came time to suit up the players, Finley had his trainer run out to Dowdle Sporting Goods the day before the season began and had them affix "M E M P H I S" to the front of the jerseys. That was pretty much the extent of the TAMS uniforms. Compared to the Pros' and the Sounds' relatively stylish outfits, the Tams uniforms were nondescript and would have been acceptable in any church-league game in Memphis.

Come game time, Finley had all of his Mid-south Coliseum employees Tam-med up! The cheerleaders wore tams. The ushers wore tams. The band wore tams. In a deal only a frugal owner like Finley could love, the Tams hired the Hillcrest High Norsemen to be the official live band for the games, mainly because their green school colors meant they already owned green blazers and Finley would not have to pay for them!

This Sunday, after the Grizzlies' game, the Memphis streets will no doubt be teeming with kelly-green-and-gold Tams and Charlie Finley's dream will finally come true -- 40 years later.