A Most Violent Year

A Most Boring Movie

During a screening of A Most Violent Year, I had a revelation: I'm sick of movies about New York gangsters. I like The Godfather and The Godfather 2 as much as the next guy. Francis Ford Coppola's twin masterpieces are rightly held up as some of the best American films ever made. I understand that a generation of filmmakers was inspired by them. But come on, people! That was 40 years ago! Can we maybe find some other group of people besides the Mob to represent the economic, social, and moral struggles of Americans reaching for the dream?

If you asked Abel Morales (Oscar Isaac) if he was a gangster, he would say no. He's in the heating oil business, and he's got a plan to expand. When the film opens, he's in a real estate deal with a Hasidic Jewish family who may or may not also be gangsters. It's 1981 in New York City, so apparently everyone is a gangster: Abel's wife Anna (Jessica Chastain) comes from a mob family and keeps a close eye on the heating oil businesses' second set of books. As you might expect from people who may or may not be gangsters, the terms of the real estate deal are not particularly good for Abel. But the plot of land is on the Hudson River, and it's got some disused oil storage tanks on it that Abel plans to use as a basis for a new oil terminal that he can use to build his completely legitimate heating oil business into an empire. 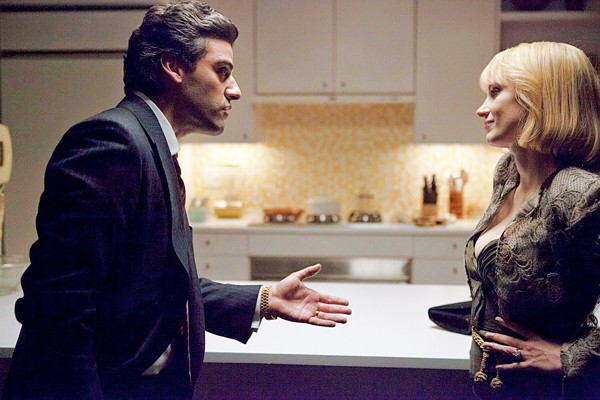 Excited yet? Maybe you will be as Abel winds through meeting after meeting with the bank and potential investors in his attempt to scrounge up enough financing to pay off his creditors and avoid losing his down payment on the vital plot of land. Because as anyone who has ever seen Star Wars Episode 1: The Phantom Menace will tell you, a string of endless boardroom meetings where people talk about arcane trade and finance issues always makes for riveting cinema.

Abel and Anna, accompanied by their trusty lawyer Andrew Walsh (Albert Brooks), are beset on all sides by mysterious opponents trying to sabotage them. The district attorney Lawrence (David Oyelowo) is investigating their company for ... well it's never quite clear, but it has something to do with the second set of books Anna is hiding in their fancy new house that looks like somewhere Al Pacino's Scarface would have flopped. Anna looks great in the New Wave nightmare of a home, styled as she is after Michelle Pfeiffer's cocaine-crazed Elvira. But at least Tony Montana and Elvira were doing something more interesting than late-night accounting.

There's also a shadowy bunch of gangsters hijacking the company's oil trucks before they can get to market, which provides the movie's sole interesting sequence, a running gun battle across the Queensboro Bridge. So you see, A Most Violent Year is not a very violent movie. It would probably be better if it were. Instead, it's mostly a bunch of men trying to look intimidating while eating Italian food.

And yet, as The Godfather proves, it is actually possible to make a good movie about intimidating people eating Italian food. That gets to the heart of the problem with A Most Violent Year: It's a cargo-cult movie. It has all of the trappings of a gangster epic without actually understanding how to use those trappings or why they work. Take The Sopranos, for example. James Gandolfini was a guy who could really eat intimidatingly. Isaac, on the other hand, just looks lost. And the writing isn't strong enough to keep those mealtime conversations interesting. The dialog is flat, the story flabby and incoherent right up to the part where writer/director J.C. Chandor throws up his hands and craps out a deus ex machina ending. I'll leave you with the final note I took during the movie: "The sideways gun is just icing on the shit cake."

A Most Violent Year