A Sense of Place

For the past 15 years, photographer Maude Schuyler Clay has been driving Mississippi's back roads photographing the Delta. In the darkroom of her 100-year-old family homestead in Sumner, she has developed hundreds of images of eroding architecture, misty bayous, small stands of woods, endless rows of crops, and dogs eking out existences from this hardscrabble landscape.

Thirty-five of Clay's black-and-white photographs make up Perry Nicole Fine Art's current exhibition, "Delta Dogs." Miniscule canines run beneath kudzu-choked cypresses and become characters in a play in which the drama of everyday life is dwarfed by what looks, at a distance, like majestically draped cathedrals.

A young muscular black lab standing in ankle-deep bayou water in Clay's most famous work, Dog in the Fog, also graces the cover of Barry Hannah's novel Yonder Stands Your Orphan, the title of which was appropriated from lyrics in Bob Dylan's apocalyptic ballad, "It's All Over Now, Baby Blue."

As in Dog in the Fog, rich subtexts weave their way through all of Clay's art. In Lilly Dog, Brazil, Mississippi, a large white dog lies on a lawn in front of the charred remains of a tenant house. Each time Clay drove this stretch of road, she saw the dog patiently waiting for owners who never returned. With her husband, photographer Langdon Clay, their three children, and several pets already at home, Clay usually enlists the help of friends and agencies rather than rescuing dogs herself. Not this time. Clay opened her car door and adopted a Delta orphan she described in an interview as a "Zen-like dog with an old soul."

The most riveting work in the Metal Museum's Artist-in-Residence Show, being hosted by the Jack Robinson Gallery, is Jeannie Tomlinson Saltmarsh's aluminum casting of baby doll faces, Escaping the Net. The cherubic cheeks, frozen smiles, and empty eye sockets of the dolls' faces are cast in aluminum and squeezed through a frayed metal mesh to create a viscerally compelling image that suggests being chewed up and spit out.

The work's title, however, invites a more positive reading — what Tomlinson Saltmarsh describes as "marshalling all of our mental/emotional/physical faculties to push through life's biggest challenges." 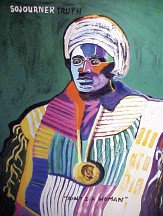 This endlessly evocative, unsparing, simultaneously demonic/cherubic image also brings to mind the Tibetan practice of "Bardo" and going beyond desire and delusion, going beyond the terrifying projections of our own minds, and getting off the karmic wheel of cause and effect altogether.

In its summer show, one of D'Edge's most accomplished painters, George Hunt, fuses folk art with collage and cubism to capture the lined faces and fractured psyches of hard-living bluesmen, gamblers, and juke-joint revelers.

But Hunt's most moving, iconic work is the 4-by-5-foot portrait Sojourner Truth, portraying the African-American orator who traveled the country in the early 20th century speaking out against the unjust treatment of women and blacks.

A mosaic of purples, deep reds, and dark blues move across Sojourner's proud, passionate face. These colors are repeated in the thick folds of her quilted dress. Around her neck, she wears a large medallion of Abraham Lincoln's lined, chiseled face.

Monumental in size and theme, Hunt's portrait of Sojourner and the portrait within the portrait of Lincoln are made more compelling when thoughts turn to our 21st-century leaders, who have become political zealots rather than seekers of the truth.

At D'Edge through September 21st

Noted Mexican artist Reyna Castano counterpoints the buoyant energy and colors that dominate the show with a mixed-media painting that brings to mind the raw concrete work of Swiss architect Le Corbusier and the crumbling facades of Spanish painter Tàpies — two artists whose sensibilities were forged by WWII.

The jagged red line that runs the length of Castano's painting The Face of Truth, the dark portals that punctuate its crumbling walls and frayed metal grids, and the work's title all suggest that clues for the destruction are deep within ourselves as well as in the ruins.

At Joysmith/Sunsum through August 31st