That is, the content of his speech here didn't make any headlines. But that speech did send a shudder through the criminal reform community, who fear a time-travel return to a "lock-'em-up" approach to prosecuting criminals.

To run the elephant out of the room, Sessions did not mention Russia. Reporters were not allowed to ask questions. Sessions' route through the building to his car was blocked by very-serious-looking security personnel (and, yes, they had those earpieces and talked into their wrists). 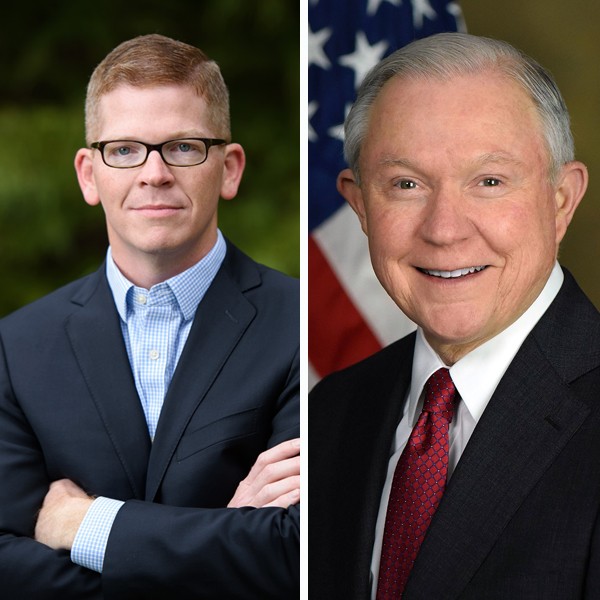 Sessions knows criminal prosecution. Before he was U.S. Attorney and a Senator, he served as the U.S. Attorney for the Southern District of Alabama and served as that state's Attorney General. For that time, Sessions gave himself some credit Thursday for the crime reduction wave that has gripped the nation.

"Yes, we've had 30 years of declining crime," Sessions said. "I'd like to think what we did with tough sentencing, and tough prosecution, and the work we did laid the groundwork for a longtime decline."

But, he warned, "[Crime] is up again." He said the nation has had three consecutive years of increases. The murder rate, he said was up 11 percent over last year, "the biggest increase since [1968]." Memphis, he noted, broke its homicide record last year.

He pointed to the Sycamore Lake Apartments in northeast Memphis, where two men were murdered last week and seven people were murdered in 2014.

"Imagine what it does to good people and families that must live every day as hostages in their own homes, facing potentially deadly violence just to walk to the bus or avoiding certain gang-controlled territory just to get to work," Sessions said.

For them, Sessions promised a return to a tough-on-crime approach to sentencing and prosecution with "severe consequences." Sessions called the approach "common sense."

Spickler said, for example, that Sessions would have local law enforcement crack down on those with small amounts of marijuana, "resulting in even more arrests, more supervision, more jail cells, and more costs, with no evident benefit to public safety." That would crowd the already-crowded Shelby County Jail, he said.

Rep. Steve Cohen said in a brief speech Thursday that Sessions' speech sounded like "something out of the '50s or '60s." He said Sessions talked tough on crime, but he "didn't talk at all about the costs of crime."

"There's a smart way to attack crime, and there's a dumb way to attack crime," Cohen said. "The dumb way is to return to the era where we failed because we locked up so many people at $30,000 a year. The only people that are happy about [Sessions'] approach is the private prison industry who make money out of people's miseries and crime."