Turnout could decide who wins in a variety of August 7th matchups.

If lukewarm early-voting totals are a reliable indicator to Election Day itself, August 7th should come and go without much sizzle in the total numbers. But there are several heated contests on the ballot, and a number of races could have unforeseen outcomes.

U.S. SENATE: There is only one Republican running — Lamar Alexander, an incumbent so heavily favored (and financed) that early on he could count on the formal support of numerous name Democrats, including Memphis mayor Willie Herenton and Shelby County mayor A C Wharton. (In the course of the campaign year to date, the two local mayors have been incessantly courted by other candidates for office, most of whom have gone wanting.)

Alexander is the Senate Republicans' caucus chairman, a position that obliges him to stay within hailing distance of official GOP positions, including most of those favored by President Bush. But the former governor and University of Tennessee president has always had a public crossover mode — certainly in comparison with the state Republican leadership, whose hard-edged partisan rhetoric Alexander (along with GOP Senate colleague Bob Corker) has frequently made a point of repudiating this year.

Of course, Alexander isn't ecumenical enough to satisfy the six Democratic candidates vying for the unenviable task of taking him on. Of these, three — Nashville lawyer Bob Tuke, former Knox County clerk Mike Padgett, and Nashville businessman Kenneth Eaton — can be regarded as serious.

Tuke, a genial ex-Marine and former state Democratic chairman, has outraised the others financially, boasts home-grown polls showing him ahead, and has more establishment support across the state than Padgett, though the latter is a dogged campaigner who enjoys the local backing of Shelby County commissioner/political broker Sidney Chism. Eaton, an also-ran in last year's Nashville mayoral race, has loaded up a showy war chest with his own money but has spent virtually nothing.

7th DISTRICT, HOUSE OF REPRESENTATIVES: Here, too, the seat is occupied by a Republican incumbent who in theory — and perhaps also in practice — should have clear sailing. This is Marsha Blackburn, the former state senator from suburban Nashville who won a sizable following for her firebrand opposition to a state income tax.

It was Blackburn whose e-mails from the state Senate floor summoned an intimidating horde of protesters to the state Capitol in July 2001 and frustrated what looked to be a compromise tax measure in the making. That, plus a congressional voting record that is consistently right-of-center and a position as an assistant party whip, should be enough to satisfy her conservative base, but former state senator and current Shelby County register Tom Leatherwood has mounted what some see as a credible challenge in the GOP primary.

Capitalizing on two well-publicized circumstances — a sizable discrepancy in Blackburn's financial disclosures and a penchant for putting family members on her payroll — Leatherwood has challenged the incumbent on grounds of both "ethics" and "effectiveness." At the very least, he will have more traction in Shelby County than did Blackburn's previous three local opponents — lawyer (later U.S. attorney) David Kustoff, state senator Mark Norris, and then city councilman Brent Taylor — who divvied up the Shelby vote.

Blackburn also had some adverse media attention up at the Nashville end of the sprawling, snake-like 7th District, but the weight of her incumbency and a campaign bankroll that dwarfs Leatherwood's, plus organized endorsements from party heavyweights, should be enough to pull her through.

Two Democratic unknowns — Randy Morris and James Tomasik — compete for a Democratic nomination whose value is mainly symbolic in a rural/subutban district that is dependably Republican.

9th DISTRICT, HOUSE OF REPRESENTATIVES: The Democratic primary (no Republican is running) pits incumbent Democrat Steve Cohen against his leading challenger in 2006, lawyer Nikki Tinker. James Gregory, Isaac Richmond, and Joe Towns are also on the primary ballot, but only Towns, a state representative from South Memphis, has any real standing, and, while he did well in last month's televised three-way debate with Cohen and Tinker, he basically is running on the fumes, while each of the major Democrats has a war chariot that is, by comparison anyhow, super-charged.

Cohen's is especially so. The second-quarter financial disclosures showed that he had raised almost three times as much money as Tinker, and his endorsement list — featuring most of the other runner-up Democrats from 2006 — is correspondingly larger as well. (Conspicuous add-ons this week were associations representing the Memphis police and Shelby County sheriff's deputies.) The Poplar corridor, which Cohen served as a high-profile state senator for almost three decades, is his for the asking, and he has not failed to ask. 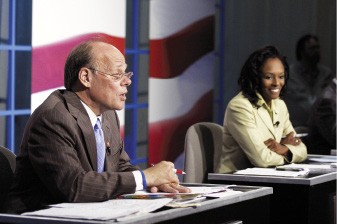 Nor has the incumbent been slack in his courtship of the 9th District's black majority. Aided by his capable aide-de-camp Randy Wade, Cohen has maintained a steady presence among his African-American constituents, focusing on bread-and-butter issues as well as symbolic ones. He has meanwhile cut a formidable figure in Congress, appearing frequently on national television as a spokesman for various party causes and shining particularly as a member of Chairman John Conyers' Judiciary Committee.

Though she seemed to flounder early, corporate attorney Tinker has gotten organized of late, and, while cynics might maintain that she has only two planks in her platform — "black" and "female" — neither of these is to be discounted. Nor is she without allies. Her longtime employer, Phil Trennary of Pinnacle Airlines, has given Tinker the same unstinted support as in 2006, and Jim McGhee, the mega-developer and former Airport Authority chairman, has lately been doing some aggressive arm-twisting on her behalf.

Also arrayed on Tinker's side are such personages as state House speaker Lois DeBerry and Chism — though the depth of their support has yet to be gauged. The same can be said of the pro-choice feminist PAC Emily's List, which backed Tinker substantially in 2006 but has been more nominal on her behalf thus far.

This past week, both Cohen and Tinker have been firing away on TV, the ultimate political battlefield even in an age of media transition that sees the progressive elevation in importance of bloggers and other Internet phenomena. Up to this point (and unlike the case with the 7th District battle between Blackburn and Leatherwood), their television ads have avoided the negative per se — Tinker's casting her as the champion of the oppressed and underprivileged, and Cohen's focusing on his two years as a breadwinner for the district and (a favorite theme, always) his long legislative sponsorship of the state lottery and the Hope Scholarships it endows.

DISTRICT 85: Larry Turner, the diminutive long-term incumbent, always draws primary opposition, and he gets it again in this year's Democratic primary from Eddie Jones and Paul Lewis. But the unassuming, mild-mannered (but independent-minded) incumbent, whose wife Johnnie Turner heads the local NAACP, undoubtedly will prove hard to turn out once more.

DISTRICT 87: The situation of Karen Camper, an interim County Commission appointee, is less salutary. Though she commands the loyalty of most legislative colleagues, the teacher and former military professional is under challenge in the Democratic primary from gadfly broadcaster Jennings Bernard, a quasi-perennial who is making what may be his stoutest bid yet.

DISTRICT 92: This Democratic primary race is a grudge match of sorts, pitting current incumbent G.A. Hardaway against Eddie Neal, the homespun bricklayer who preceded him as an interim commission appointee. Hardaway, author of a controversial proposal to test all putative dads for DNA matchups with their children and foe of a Fairgrounds development proposal, has aroused some opposition but commands decent establishment support, as well.

But Neal, who campaigned to limit officeholders to a single elected position, has well-placed backers, too, and is very much a contender.

DISTRICT 98: Ulysses Jones, the veteran firefighter/legislator who serves here, has — in more than one sense of the term — long legs, and he should easily outdistance a primary challenge from Boris Combest, a busy maverick member of the local Democratic executive committee.

Criminal Court Judge, Division 6: Incumbent John Fowlkes got a fill-in appointment from Governor Phil Bredesen that the governor wanted badly to bestow on Fowlkes for the position of state Supreme Court justice, had the state Judicial Commission obliged Bredesen by including Fowlkes' name on any of its several recommendation lists for the high court.

But it didn't, and Bredesen and Fowlkes, a former prosecutor and, more recently, CAO for county mayor A C Wharton, had to settle for Criminal Court. Fowlkes has Wharton in his corner, along with other high-powered supporters, and that should be enough to hold off three challengers, the busiest and best-financed of whom would seem to be LaTonya Burrow, a member of the public defender's staff.

Her gender could be a factor, given the recent tendency in Shelby County to elect female judges. The other hopefuls are Claiborne Ferguson and Michael Floy.

Both have indicated in forums and interviews that they know their stuff concerning reassessment procedures and property values in the currently unstable housing market. What the race comes down to, probably, is a test of whether this year, unlike the last several countywide elections, sees the long-prophesied demographic edge for Democrats finally materialize.

General Sessions Clerk: The same issue holds in Democrat Otis Jackson's challenge to incumbent Republican clerk Chris Turner, who will benefit from the presence in the race of black independent Robert J. Matthews Jr., as he did four years ago when Turner squeaked by Democratic challenger Roscoe Dixon, now a federal inmate after conviction in the Tennessee Waltz scandal.

Trustee: Ordinarily, incumbent Paul Mattila would be considered a shoo-in. A white Democrat with Republican connections, he reportedly also had the blessing of the late trustee Bob Patterson, with whom Mattila worked closely for years as legislative liaison. Those circumstances (along with shepherding from Sidney Chism) got Mattila the County Commission's nod as interim trustee following Patterson's unexpected death in January.

See also ”A Post-Racial Election?” and ”The Fine Print”.