A Star Is Born

Lady Gaga and Bradley Cooper dazzle in a rare remake that feels necessary.

When David Bowie met Cameron Crowe, then an 18-year-old writer who had been assigned to interview the superstar for Rolling Stone, he had this advice: "Don't expect to find the real me, the David Jones underneath all this." From the outside, Bowie had it all in 1975: He was the toast of Los Angeles, the biggest music star of the decade, who had just finished filming his first starring movie role in The Man Who Fell to Earth, and he was about to embark on a world tour. But really, he was a man on the verge of physical and psychic collapse, living on cocaine, whole milk, and red peppers (to stave off scurvy), unable to trust anyone or enjoy anything. He was hollowed out by fame.

When we meet Jackson Maine (Bradley Cooper) in A Star Is Born, he isn't that far gone yet, but he has broken the "handful of pills and gin before stage time" barrier. His dad rock stylings are still filling ampitheatres and earning him choice festival slots. But he can't get no satisfaction, and the nagging feeling that he should be having fun makes him want to smash up a few pills with his cowboy boot and snort the powder. 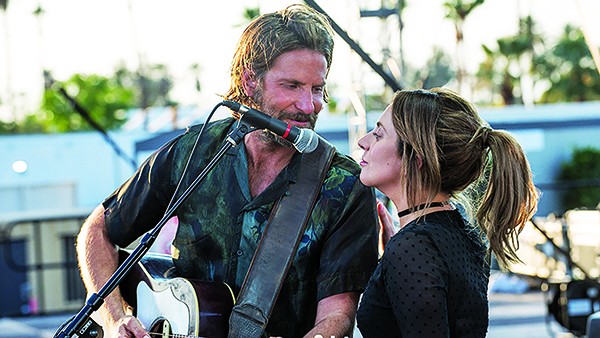 Adrift after a successful show, he wanders into a drag bar for a nightcap and stumbles upon the find of his life. Ally (Lady Gaga) is a waitress, just off her shift, who performs with the voice and stage presence of ... well, Lady Gaga. It's pretty much love at first sight for Jackson, but Ally is wary. She's a working-class Long Island girl who knows a spiraling drunk when she sees one.

Their long first night, which takes up at least 20 percent of A Star Is Born's running time, is the best part of the picture. Cooper is one of the few capital-M Movie Stars we have left here in the ruins of the 21st century, and Gaga's secret weapon is the decade she spent in acting classes at the Lee Strasberg institute. Their chemistry is deep, and Cooper, who also directed, luxuriates on the details of their budding bad romance. After she punches a cop (it's a hell of a first date), they write a song together in a grocery store parking lot. Then, he's back on the road, and she's back home with her crusty limo driver dad (Andrew Dice Clay) and her job waiting tables.

But Jackson isn't ready to let it go, and he sends his driver to whisk her away from the restaurant floor and onto the stage at his next concert, where they sing their first duet. A Star Is Born has now been remade three times, and this sequence is the essence of the story's appeal. A talented unknown is whisked from obscurity and elevated instantly to the height of success, without the intervening years of struggle and disappointment that Stefani Germanotta went through before becoming Lady Gaga.

The character trajectories for Ally and Jackson form a perfect X: She starts low and ends up high, while he does exactly the opposite. Cooper is at his best, subdued, subtle, without any of the mugging he sneaks into David O. Russell films. Gaga is both unmannered and layered. Like Robert Mitchum in Out of the Past, she knows on some level that this is all going to end badly, but she can't help herself. It certainly helps the progression of the story that Cooper is a passable belter at best, while Gaga sings with surgical precision.

This is high melodrama of a kind rarely seen these days, or executed this well at any time. Cooper's direction shows an unexpectedly deft hand, even if he does linger a little too long on his own character's final downfall. He and cinematographer Matthew Libatique have been watching a lot of Kubrick, with strict, symmetrical compositions popping up at key moments in the story. Ally is introduced in the center of a series of vanishing point shots, so she appears to have lines of pent up energy radiating from her. Later, when she and Jackson perform their first duet, they're framed with angelic lens flare halos.

A Star Is Born is always the meta-story of fame as conceived in the time it is made. For Judy Garland in 1954, that meant success in MGM musicals. For Lady Gaga, it's Bonnaroo, Coachella, and Red Rocks. We already know how this meta ends: Lady Gaga becomes a superstar. What the woman who achieved immortality by bungee jumping into the Super Bowl understands is that her fans (represented here by the drag performers she started out with) want to see the "real person" beneath the meat dress. And so she puts on an uncanny front of vulnerability in her first starring role. I suspect Stefani Germanotta and David Jones would have had some very interesting conversations.