One would be pretty safe calling Regina's a family affair. Terese Burns and her sister Ciera Robinson, who are New Orleans born and bred, share duties at the restaurant, along with their seven other siblings. A brother found them a prime spot at the corner of Court Square Downtown. A few cousins work in the kitchen, and their father backed them (as his father backed him in his sweets shop). The titular Regina is an aunt. Though Regina is still with us, they wanted to honor the legacy of her genuineness and caring. "She would give you her shirt off her back," says Ciera. (She can cook good, too, the sisters say.)

Regina's serves breakfast, lunch, and dinner. All the New Orleans highlights are there: po'boys? "Yeeeesssss," says Ciera. Jambalaya? "Yeeeesssss." Gumbo? "Yeeeesssss," she says, as if to intone, C'mon now, of course, we've got that.

The sisters say they were bound to have a restaurant. Both have backgrounds in the industry, and they considered other locations in Houston and Iowa, but Memphis, they say, had that "it" factor. The restaurant opened in November.

But back to that menu. They've got seafood by the pound, including king crab and lobster; Cajun nachos (!) with crawfish tails and smoked sausage; crab cakes; a catfish basket; and a crab platter with stuffed and soft-shell crab with fried crawfish tails, and oysters.

They also serve, on Wednesday and Thursday only, Yaka Mein, aka "Old Sober." This beef noodle soup, served with boiled eggs and soy, hot sauce, Worcestershire, and ketchup, is known to zap a hangover and is a staple at mom and pop stores in New Orleans.

For breakfast, one could order beignets, a sausage biscuit, and a pork chop platter with eggs. And, yes, lots of grits. The grits are made with heavy cream. "We bring it back to our roots," says Ciera.

The New Orleans vibe extends to the bar, which serves such classics as the Hurricane, the Sazerac, and Pimm's Cup.

They also have lunch specials. Four dollars can get you well fed at Regina's.

"We try to reach all folks," Terese says. All folks include vegans. On Tuesday, they serve vegan tacos.

Regina's catfish, served fried, grilled, and blackened, is exceptional, the sisters say. They also insist on sourcing the French bread and red beans from Louisiana or "It will not taste the same," says Ciera. They'll put their gumbo up against anybody's.

"It's the food that we know best," says Terese.

If Tuyen Le looks familiar, that's because she worked for 20 years cooking and serving customers at her family's restaurant Saigon Le on Cleveland in Midtown.

While Saigon Le is not coming back anytime soon, you can find Le once again cooking and serving customers on Cleveland at New Orleans Seafood.

This is the second New Orleans Seafood. The original is on Crump. Le got into the business through her boyfriend. She says there was no learning curve in going from Vietnamese to Creole. She's got her instincts, after all.

The seafood is sourced fresh from New Orleans. The menu features fish and chicken wings. A 12-piece shrimp platter with fries, onion rings, or hush puppies is $8.99. Two dozen oysters are $10.99. 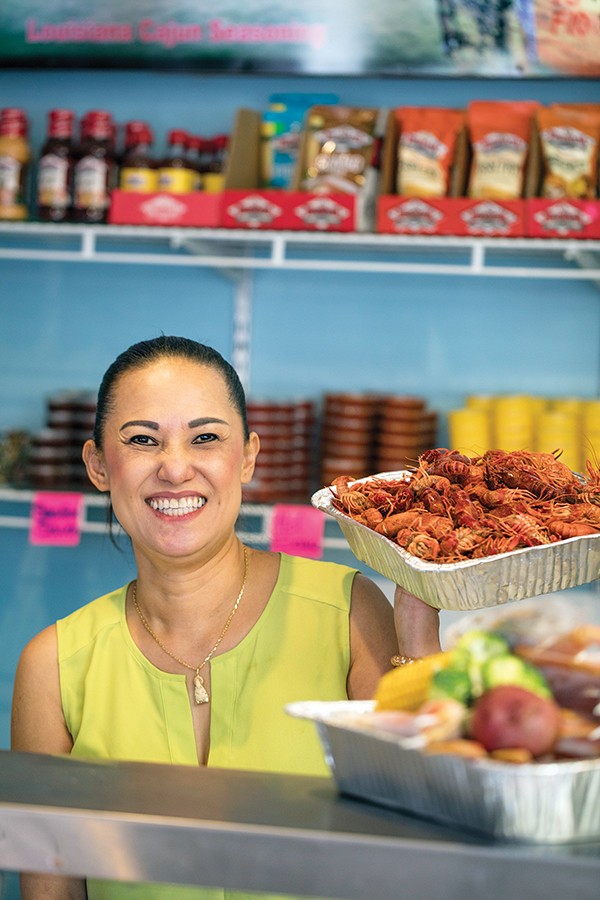 Le hopes to see some familiar faces from Saigon Le soon. "I love my customers," she says. "I miss all my customers."