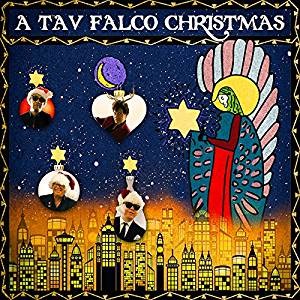 When I first discovered the early catalog of Charlie Rich, I cringed at the many tracks where Sam Phillips had overdubbed corny background vocals, no doubt in a bid to make the records more commercial. But after a time, I came to enjoy the gooey overdubs as a sign of the times in which the great Rich lived. Imagine my delight upon hearing A Tav Falco Christmas (Org Music/Frenzi Films & Music), the art-damaged Arkansas cat's nod to festive fun, which is chock-full of those same cornball harmonies.

Of course, this is in keeping with the Christmas spirit. Every year, my mom would make holiday popcorn balls, stuck together with scalding hot corn syrup. Once they cooled and solidified, the bits that stuck in your teeth and gums would give you pause. This album is a bit like that. Having been recorded at Sam Phillips Recording, the vanilla background vocals are spot-on. The band, featuring Falco's touring outfit of Mario Monterosso on guitar, Toby Dammit on drums, Francesco D'Agnolo on piano, and the great Mike Watt on bass, is well stuck-together: solid and tight, moving deftly between slow burners like “Blue Christmas” and thumping funk like “Soulful Christmas.” D'Agnolo's bluesy ivory-tickling is especially soulful, crafty but not too polished. And then there is Falco's voice. Fans, of course, know his earnest hepcat delivery well. It is, as Mose Allison would say, “loaded with rustic charm.” The final effect of Falco crooning while his backing group plays it straight is unsettling, like some kind of feral karaoke.

I mean it as a compliment when I say that, should David Lynch make a Christmas movie, this would be the soundtrack. Surely we have enough competently-sung Christmas albums already. What we need more of are singers with real character in their voice, and Falco delivers this in spades. For most of the album, the aforementioned pattern holds. The band plays with dogged restraint and Tav does his thing, as the background singers look on with a nod and a wink. The material is classic holiday fare: “White Christmas,” “Jingle Bell Rock,” “Rudolf the Red Nose Reindeer,” and so on, book-ended with slightly more obscure numbers, the bluesy “Santa Claus is Back in Town” and James Brown's “Soulful Christmas.” Only in the latter number does a bit of the old Panther Burns energy emerge, as the boys in the band bring on the slamming beat and Falco lets loose with echo-drenched howls that conjure up the legendary burning panther head. All in all, it's a wacky, eclectic mix, a tray of backwoods bonbons to fill your hearth and home with good cheer.