A Visit to Pontotoc Lounge

The only reason that the Pontotoc Lounge wasn't packed the night I went is that, presumably, not enough people know that there's an actual bar that is equal parts the "Be Our Guest" set from Beauty and the Beast and a contemporary art funhouse. It's luxurious and intimate, creative and dark. We went in the middle of the week and spent a few hours with Cady Smith, one half of the bartending duo who designs, names, and serves the drinks at Pontotoc Lounge. It didn't have any cursed Prince Charmings, but if one spends enough time at this elaborate, mirrored bar, one could easily understand the appearance of dancing furniture.

Pontotoc Lounge has undergone a bit of an overhaul. Its former version was bright and airy with white walls. It was the kind of brightness and natural light that I don't like to associate with drinking unless said drinking is being done on a patio. It also felt out of place in an arts district known for its devotion to darker, grubbier bars. Fortunately, owner Daniel Masters must have recognized this, because he went in the complete opposite direction with Pontotoc's latest incarnation. The walls are now black, and the lights are low. Large, framed mirrors are hung everywhere, and in the dimness of the space, the mirrors make for a fun adventure for anyone navigating toward the restroom. This is made no easier by the incredible mural by Frances Berry that covers the whole hallway including the ceilings; Berry's line work makes this a perfect location to be blindfolded and spun around before being made to walk a straight line. Masters also dropped "café" from the name and added the slinkier and sexier "lounge." 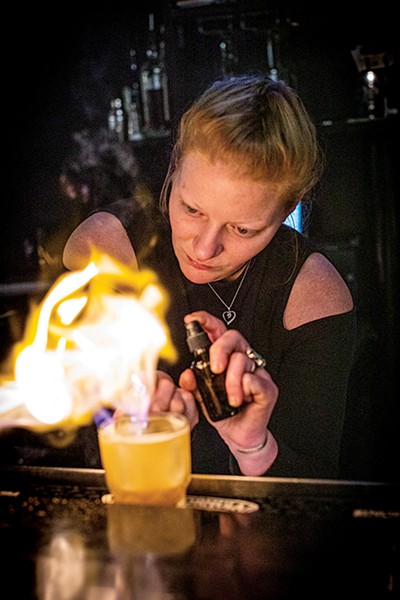 Smith and her colleague, Jonathan Wade, have put together a hell of a drink menu that matches the new look. It's unique without being over the top, featuring cocktails like the Mezcal Negroni (a combination that works way better than it should) and the Constant Sorrow, which is the perfect drink for the post-holiday Seasonal Affective Disorder that's wrecking your life right now. For the more adventurous among us, the menu also has the Safe Word (gin-based with ginger and rosemary) and Love Your Mouth (inexplicable flavor combination of rum and egg white). They've incorporated local spirits from Old Dominick into their menu, which Smith says they try to change seasonally. She and Wade make most of their bitters, shrubs, and tinctures. The Smokin' Mary, made with Old Dominick bourbon, was a delicious concoction made even better by a rosemary tincture that is so concentrated it can be lit on fire. Anyone who lights drinks on fire can fully expect to see me back at their establishment. Pontotoc also serves their wine in large, voluminous glasses, which is an oft-ignored special something that all bars should do.

Perhaps the most grandiose display of luxury within the Pontotoc is the oversized, completely unnecessary chandelier. It's hard to describe how large it is, as a piece half its size would still look massive in the narrow, dark space. Evoking the Beast's mansion and frolicking décor, it's cartoonish in the perfect way. I felt fancy sitting underneath it, so I can only imagine how girls on actual dates probably feel when they visit Pontotoc. It is the perfect centerpiece in a bar where interior decorating is already much celebrated and respected.

The Pontotoc Lounge is by no means a dive bar, but it does a bang-up job of fitting in with the dive bars, chandelier and all. It knows its South Main audience, because there are two TVs for those who like decadence but also need to keep up with Mike Conley and 624 new Grizzlies. It has a full menu with meat and cheese plates and chicken and dumplings among other delicious-sounding dishes. They even serve brunch until 6 p.m. on Sundays (2 p.m. on Saturdays) for those patrons who find themselves allergic to sunlight, or, because they're a monster from a Disney movie, don't like going out in the daytime. Give this place a visit; I may just be there, too, clapping gleefully at things on fire.