Joseph Conrad's novella Heart of Darkness didn't make much of a splash when it was published in 1899. But the writer's reputation grew steadily in the first two decades of the 20th century, and by the time T. S. Eliot published his epoch-defining poem "The Hollow Men" in 1925, he began with a quote from Conrad. "Mistah Kurtz — he dead." None other than Orson Welles wanted to produce Heart of Darkness for his first movie, but he had to settle for writing Citizen Kane instead. The story was most famously adapted in 1979 by Francis Ford Coppola in Apocalypse Now by moving the setting from Africa to Vietnam and replacing Conrad's Charles Marlow, a naive young man who witnesses the horrors of colonial rule, with Captain Willard, a hardened assassin ordered to kill one of his own whose "methods have become ... unsound."

Director James Gray has become the latest to put Conrad's framework to good use. The definitive adaptation of Heart of Darkness' subtle critique of the barbarity of colonialism will have to wait a little longer because Gray and writer Ethan Gross have moved the action to space. Ad Astra's hero is Major Roy McBride (Brad Pitt), an astronaut in the "near future" who flies for a fictional Space Command. When we meet the Major, he's working at a prosaic post halfway up a space elevator, hundreds of kilometers above the atmosphere. But things go from boring to life threatening in a hurry — such is the astronaut life — when a mysterious energy surge from deep space hits the towering antenna and things get all explode-y. Roy, dressed, as he will be for most of the film, in a spacesuit, scrambles to contain the damage, then hurls himself off the space elevator and falls to earth, dodging flaming debris and hoping his emergency parachute won't be too full of holes when it's time to land.

The opening sequence sets a high bar for the picture. The production design, led by Kevin Thompson, masterfully combines familiar elements with speculative design to create an air of realism. Space, in Major McBride's world, is not fun. It's trying to kill you a dozen ways all at once, and the most dangerous elements are the ones you never expect.

Roy, it turns out, is a second-generation astronaut. He followed in the footsteps of his father, Clifford McBride (Tommy Lee Jones), who was the first man to lead a crew to Jupiter. The elder McBride disappeared 16 years earlier, along with the crew of the LIMA project — a mission to search the outer solar system and beyond for signs of intelligent extraterrestrial life. Clifford took along what turned out to be an unwisely large amount of antimatter, which Space Command believes is the source of the mysterious energy surges emanating from the vicinity of Neptune that have continued to wreak havoc in the populated inner solar system. Furthermore, they have a classified reason to believe that Clifford is still alive and lurking, Kurtz-like, in Neptunian space. Instead of going up the Congo or Mekong rivers, Major Roy sets out to cross the solar system in an attempt to keep his thought-lost father from destroying human civilization.

At times, Ad Astra displays its Conrad fetish awkwardly. Brad Pitt's flat-affect voice-over puts it squarely in Coppola territory and goes a long way toward establishing the depths of the Major's malaise. The film's surface commitment to realism is frequently at odds with its urge to be a rootin' tootin' space adventure, such as in a spectacular scene where our hero attempts a hazardous crossing of the rings of Neptune. In times past, the muddled science would have driven me nuts, but I have mellowed. I must give Gray props for being the first filmmaker to attempt to depict the eighth planet since the Mystery Science Theater 3000 anti-classic Invasion of the Neptune Men. (And yes, Neptune does have rings.) 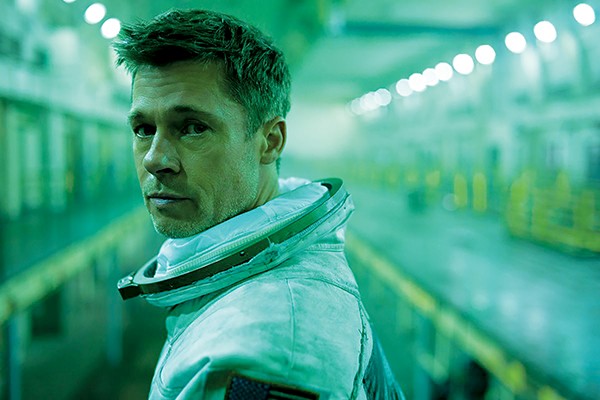 What holds it all together is a fantastic performance by Pitt. You can hear the echoes of both Martin Sheen's "Saigon ... shit ..." and Ryan Gosling's emotionally crippled portrayal of Neil Armstrong, but when the film threatens to spin off into excessively goofy space, Pitt's there to reel it back in with his soulful blue eyes and clenched jaw. Major McBride is an unforgettable character for whom the Right Stuff has become a burden too heavy to bear, but too important to put down.