Today's useful Hollywood term is "development hell." That's the phase of production between ostensible green lighting and the start of actual filming. When all goes well, that's called "pre-production." But when it doesn't go well, you go to development hell, and you can stay there for a really, really long time. Mad Max: Fury Road is an extreme recent example. George Miller was stuck in development hell for 18 years — with production sidelined by things like 9/11, Mel Gibson's legal problems, and an unexpected rainy season in the Australian desert. The result was one of the greatest sci-fi action films of all time. But the more common outcome of a stint in development hell is either fatal bastardization or outright cancellation.

James Cameron first decided to adapt Yukito Kishiro's Alita: Battle Angel in 1999, the year after Titanic put the director on the "top of the world." For the next two decades, Alita was going to be Cameron's "next project." But there were detours along the way, to the alien planet Pandora for Avatar in 2009, and then to the bottom of the Mariana Trench, because he just wanted to go there. Eventually, Cameron decided to devote his directorial time to making Avatar a franchise, and he recruited Robert Rodriguez to helm Alita. And now, two decades and an estimated $175 million later, Alita finally hit the IMAX screen. 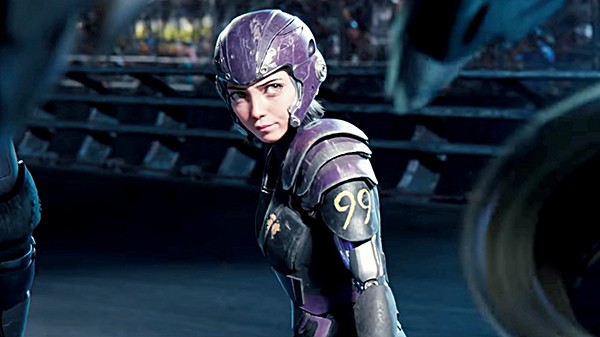 I'll have to admit, I had pretty low expectations going in. Cameron has made some unassailable classics, but Avatar always felt to me more like a technology demonstration reel for the 3D cinematography and motion capture systems he developed than a fully realized film. Rodriguez, likewise, is a first-wave indie hero who has done some great work (Spy Kids is fabulously underrated), but seems to have been coasting for the last decade or so (Sin City: A Dame to Kill For should have rotted in development hell). My expectations, I'm happy to say, were greatly exceeded.

Alita (Rosa Salazar) awakens in what looks like a teenaged girl's room. She has no memory of who or where she is, but her body, while human-shaped, is robotic. She discovers she is the pet project of Dr. Dyson Ido (Christoph Waltz), a cyberneticist living in Iron City in 2563. Three hundred years ago, there was a terrible war that ended with The Fall, in which all of the Earth's massive floating cities came crashing to the ground, killing billions. The only one that survived was Zalem, which now hangs over Iron City like a storm cloud filled with rich fascists. Iron City is their heavily populated junkyard, which they rule from afar with a murderously heavy hand. The only sure-fire way to get from the slums to Zalem is by becoming the grand champion of motorball, a kind of combination of NASCAR and soccer played by cyborg gladiators on inline skates.

Alita's initial quest to find her identity takes us through the war between the United Republic of Mars technocracy and Earth's oppressive oligarchy. The flying city built at the bottom of a broken space elevator, keeping the huddled masses in line with a fully privatized justice system where police have been replaced by bounty hunters, provides the class war metaphor. In a conflict-scarred world where cybernetic implants are ubiquitous, there's a lively trade in stolen artificial body parts. This proves perilous for Alita, when it is revealed she is an advanced, antimatter-powered cyborg, and thus greatly in demand. It's refreshing to see a new world, not based on a Marvel hero or Star Wars, that feels integrated and lived-in. The story, adapted from five years worth of manga and who knows how many script drafts in the last two decades, ends up feeling episodic as Alita explores the aspects of her fallen world.

Perhaps Alita would have felt more timely had it been made when originally planned, back when the kick-ass kawaii girl still felt Buffy fresh. Ghost in the Shell covered similar thematic territory, but Alita is superior in every way. Salazar is a natural, and, thanks partly to a patiently paced first act, she really grows on you by the time the stakes are the highest. Rodriguez avoids grossly sexualizing his heroine, even while she navigates her tragic teenage love story.

What holds the whole project together is the incredible visuals, which push Cameron's 3D IMAX tech to its limits. Iron City has layers upon layers of architecture, built up as the centuries passed and technology advanced and retreated. Flashbacks take us to a spectacular battle on the lunar surface. If world building is your thing, Alita is your movie.